Geoffrey Baer peeks into a Wrigley Field teepee and goes under the dome at Preston Bradley Hall in this week’s Ask Geoffrey. 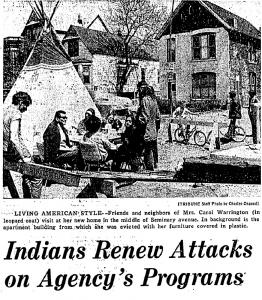 There was a teepee outside of Wrigley Field in the ‘70s, and it had nothing to do with Cleveland or Atlanta baseball teams. It was put there by a group of Native Americans protesting poor social services and housing conditions for Native Americans relocated to Chicago. But it wasn’t at Clark and Addison – it was on the other side of Wrigley Field at Seminary and Waveland.

The protest began in May 1970 when a Menominee woman named Carol Warrington and her six children were evicted from their apartment on North Seminary for refusing to pay rent. Warrington was withholding rent to pressure the landlord into improving the building’s living conditions.

The story really starts in the 1950s, when the federal government passed the Indian Relocation Act, which pushed thousands of Native Americans off of reservations into urban centers as part of an effort to integrate them into mainstream American society. Chicago was one of a handful of cities given assistance from the Bureau of Indian Affairs to pay for housing and employment for these relocated people, but the transition was difficult for many and the housing provided was often in bad shape. The American Indian Center, which today stands on Wilson Avenue in Ravenswood, formed in 1953 in response to this flood of Native Americans moving to Chicago.

When Carol Warrington was evicted, a group of young Native Americans borrowed the American Indian Center’s large teepee and set it up across from Warrington’s building next to Wrigley Field. Word spread and throngs of people gathered in solidarity at the protest. Many pitched their own smaller tents around the teepee. Within two days, most had left the protest. 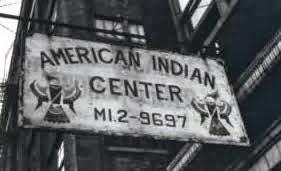 Those that stayed began to call themselves the Chicago Indian Village. One of them, a student of famed community organizer Saul Alinsky named Mike Chosa, appointed himself as the group’s leader. As the protests wore on he became prominent, if polarizing, figure in the media – a Chicago Tribune profile of him called him “an Indian Moses.”

Chosa went on to lead seven similar encampments throughout the Chicago area, including a former Nike missile site at Belmont Harbor, an abandoned apartment  building in uptown, Fort Sheridan, and near Big Bend Lake in Des Plaines. But by the summer of 1972, the momentum behind the Chicago Indian Village and was exhausted, Chosa’s leadership began to falter, and the group eventually dispersed.

As for Carol Warrington, she started her own group in early 1972 named INDIAN, or Indians Near Death in American Nations. She relocated to Arizona, where she led a protest encampment similar to the Wrigley teepee village.

The footage of the Wrigley Field Indian village came from a documentary called "The Divided Trail" made by filmmaker Jerry Aronson, which followed four Native Americans upon their relocation to Chicago. 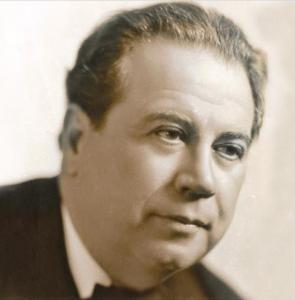 Dr. Preston Bradley was an outspoken progressive figure in religious and civic affairs for decades in Chicago -- prominent enough have to have both a church and a hall in the Chicago Cultural Center named after him.

Bradley was born in rural Michigan in the 1880s, and as a young adult was ordained in the Presbyterian Church. But he quickly became disenchanted with the idea of Christian denominations. So he resigned from the Presbytery in 1912 and started a non-denominational, independent church called The Peoples Progressive Church of Chicago, later simplified to The Peoples Church. Under Dr. Bradley’s leadership, The Peoples Church grew to more than 4,000 members -- big enough to build its own huge church on Lawrence Avenue which opened in 1926. Dr. Bradley served as senior pastor of The Peoples Church from 1912 to 1978 – 66 years. He was also one of the first pastors to preach to a radio audience.

In 1987, the Lawrence Avenue building was named in honor of his decades of service. True to the church’s progressive nature and namesake, the 1,500-seat auditorium has none of the usual features of a church, but is open and airy. The Preston Bradley Center remains home to The Peoples Church today. It’s a struggle for them to make ends meet, but they continue to work for social justice with programs that feed and minister to homeless and low income people in the neighborhood. 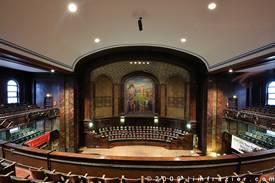 Dr. Bradley’s passion for social justice made him a prominent figure in civic affairs, too. He marched with Jane Addams for women’s suffrage and with Martin Luther King for civil rights. He preached against the Ku Klux Klan and was appointed to the commission that formed the United Nations by Franklin Delano Roosevelt. And he served as a member of the Chicago Public Library Board for 50 years and its president for 25 years, which provides the connection to Preston Bradley Hall in the Cultural Center.

Many of our viewers will recall that before it was the Cultural Center, the building at 78 E. Washington started life as the main library for the city in 1897. The third floor, now known as Preston Bradley Hall, was the library’s main circulation room. Its Carrara marble walls are ornamented with sparkling Tiffany mosaics featuring the names of renowned authors and meditations on literature and learning. In the center of the room, a breathtaking 38-foot Tiffany dome illuminates the space. Light plays in golds and greens through the fish scale pattern of Favrile glass and the signs of the zodiac circle the top. The dome, which the Cultural Center says is the largest Tiffany dome in the world, was restored to magnificent effect in 2008. The hall was named after Dr. Bradley in 2008 to honor his years of service to the library and the city. These days, Preston Bradley Hall is home to many arts and culture events, including many musical programs hosted by our sister radio station, WFMT.