Forgive Us Our 'Trespasses' 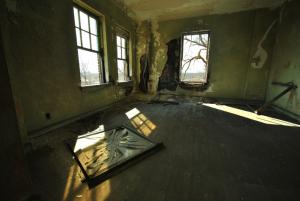 They’re okay with entering but not with breaking.

Three local friends routinely visit abandoned industrial sites in the Midwest, enter the buildings, and take only photos. They don’t carry crowbars or anything that might attract the attention of the police, who generally leave them alone.

The title of their new show is "TRESPASS." The photographers are well aware that trespassing is a misdemeanor and breaking and entering can be a felony.

Whatever their trespasses, it would be criminal to miss an uncommonly good new photography show in the art gallery of the Oak Park library.

More than 30 powerful images in color and black-and-white fill the eye with forgotten details and abject decay. Photographers Kari Neuliep, Bryan Northup, and Jerry Olejniczak clearly take chances to shoot these photos of the alien landscapes in our midst. They took the risk so you don’t have to. 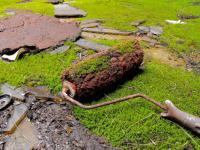 They’ve shot in East St. Louis, Detroit, Gary – the usual suspects of the rust belt – but also Chicago and rural areas. They shoot in factories, churches, theaters – one-time gathering places that now resemble overgrown graveyards. The pictures can harbor unexpected beauty or nightmarish visions, sometimes both in the same image.

There’s a long history of momento mori in art, reminders of the impermanence of everything, including us. These surprising compositions and haunting images of the ghosts of an earlier America are clearly worth a momento of your time, because it’s later than you think….

The exhibition is called "TRESPASS: Exploring Urban Decay." It’s at the Oak Park Main Public Library, it’s free, and it’s open through the end of July.

You can see more photos by Neuliep, Northrup, and Olejniczak at their website, The Idiot Photographer.