Illinois will be celebrating its bicentennial in 2018, and two authors have suggestions on how to fix the funk in Illinois just in time for the celebration. Joining Chicago Tonight to discuss, Fixing Illinois: Politics and Policy in the Prairie State, the blueprint for solving the states problems is co-author of the book J. Thomas Johnson.

Realities and Perceptions of Corruption in Illinois 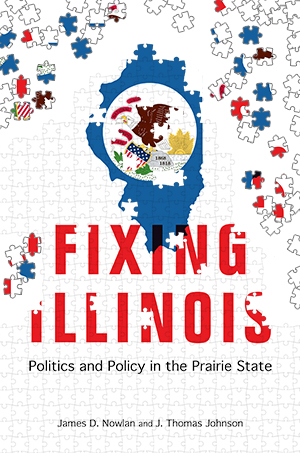 By some measures Illinois is among the most corrupt states in the nation. According to an analysis of U.S. Department of Justice reports of convictions for public corruption from 1976 to 2010, 1,828 persons in Illinois have been found guilty during this time frame, more than in any states but New York and California. On a per capita basis, Illinois ranked third among the large states in public corruption convictions. The United States District Court for the Northern District of Illinois (metropolitan Chicago) tallied more convictions for public corruption over a thirty-five-year period than did any district court in the nation.

And that represents only the illegal corruption. Illinois officials have become masters of milking our governments and taxpayers through legal corruption. We are deeply disturbed, for example, by the 2011 Chicago Tribune investigation that found that Chicago alderman Edward Burke doubled the annual pension of his buddy, former state representative Bob Molaro, to $120,000. Burke had Molaro work for just one month at $12,000, which created an annualized salary rate that qualified him for the doubling of his legislative pension. What did Molaro do to earn the $12,000? He wrote a paper about the sorry state of our public pension systems, basically laughing at the taxpayers who will pay the extra pension benefits for Molaro! For too many public officials in Illinois, doing well in public office comes before doing good for the public.

By other measures, however, Illinois is in the middle of the pack when it comes to corruption. Professor Richard Winters at Dartmouth College points out that if the numbers of elected officials per state are considered (Illinois has more than forty thousand, far more than most states, because we have more units of local government than any state), then Illinois is really about average in terms of convictions for public corruption per thousand elected state and local officials.

Yet reality may lie in the eye of the beholder, and when it comes to perception, Illinois consistently ranks among the most corrupt states in the nation. For example, in a 2012 poll that we conducted, one-third of those surveyed identified Illinois, unsolicited, as such, following only New York and California. And a full 45 percent of the respondents over age thirty-five named Illinois as one of the most corrupt states. Other Midwestern states were rarely mentioned as among the most corrupt, which means that Illinois sticks out like a sore thumb in the heartland region.

Journalists believe Illinois to be one of the most corrupt states as well. In 2000, Richard Boylan and Cheryl Long surveyed journalists nationwide, who ranked Illinois third highest in corruption among the forty-five states with usable numbers of responses.

Widely held perceptions such as these are also bad for business in Illinois. In the national survey cited above, 60 percent of the respondents said knowing about corruption in a state would have a negative or strongly negative effect on their decisions to locate in such a state.

Possibly more important is a 2011 survey we took of seventy economic development professionals in Illinois (the people who work to attract business to a community). Three in four surveyed said corruption in Illinois had a negative impact on their business recruiting. Among the forty-nine written responses to this question, two provide particular insight. One says, “Unfortunately and especially in manufacturing and international circles, there is an understanding that corruption in Illinois that once occurred at an individual level has moved to systemic corruption.” The other states, “As part of an economic development marketing group that spans Illinois and Iowa, I keep hearing that Iowa makes sense as a business location if you just want to fill out an application and have a transparent process. Illinois works better if you have political clout and are willing to use it. I think that is a travesty and that is what Illinois is becoming known for—pay to play.”

What has come to be called “the Chicago Way” or “the Illinois Way” of public corruption has likely undermined the voters’ sense of political efficacy. Why apply for a city or state job if you think that only friends of political insiders will be hired? Why report corrupt officials if you think they won’t be punished and that the system may turn the powers of government on you instead? Voters may sometimes laugh at the antics of corrupt public officials, but in the end they feel powerless, lose their faith in government, and vote less often because they believe that the fix is in. Lilliard Richardson found in his study of the 2008 national elections that “convictions (for public corruption) per capita are strongly associated with lower political activity across the board.”

And there are tangible costs to corruption. Political scientist Dick Simpson estimates that it costs Illinois and its governments $500 million each year. “Governor Blagojevich’s well-publicized corruption antics” he writes, “led to a lowering of the state’s bond rating, which cost the state more than $20 million during a recent bond issue. Corruption also takes time and resources away from police and prosecutors. Blagojevich’s first trial costs tens of millions of dollars to investigate and prosecute.” Read more here.