"Life is a Wheel"

New York Times obituary writer Bruce Weber was teetering between life and death, and questioning what it all meant in 2011. To cope, he took his second bike ride across the country. We talk with Weber about his ride experience and the book that arose from his meditations called Life is a Wheel: Love, Death, Etc., and a Bike Ride Across America.

Read an interview with Weber: 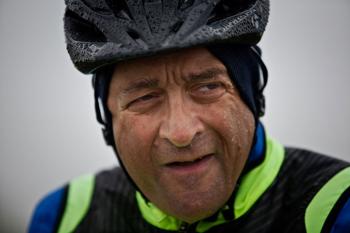 You describe your 2011 bicycle trip as a way of dealing with a midlife crisis or “reckoning?”

Short answer is yes. It was a response to a number of things in my life; one, that I was working as an obituary writer and I didn’t want to let go of my physical life even though I’m getting close to 60. I thought by doing it again, I might have experiential bookends in which to write a book.

How would you describe your 1993 trip?

The first trip was when I was 39, and I considered it a farewell to my vanishing youth. I did it as – I didn’t know what to expect and had done bicycle traveling on a smaller scale - but it turned out to be an event of greater significance than I realized. It was long, difficult, and incredibly rewarding. I, at the time, never thought I would do it again.

What drove you to make the trek a second time in 2011?

As I said, I was getting a little tired of being stuck in an office and was feeling my age - writing obituaries every day and thinking about death. I wanted a couple of things: I wanted to reach back to one of the great adventures of my life and thought I could repeat this in a new way with a different perspective. And I thought I might be able to get a book out of it. The idea of a long, solitary journey across the country struck me as a metaphor for the long journey we are all on. 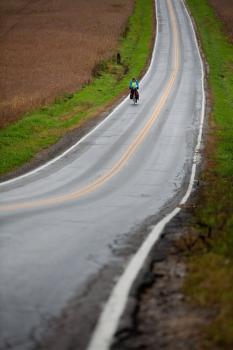 Aside from the tech advances, political climate and age, what was different in the second go-around?

It was a meditative trip. Biking itself is not meditative. It’s focusing. The book is written in the form of a diary. But the meditative stuff about my family and romantic life, and about my professional life and about growing older, was written after I finished the trip. The bicycling itself – people ask what I think about on a bike – the truth is you think about bicycling.

You catalog a number of experiences besides the ride– a friend’s funeral, reflections on childhood, relationships -- what do you think is in it for the non-cycling enthusiast?

Quite a bit. I think of the bicycle trip as the narrative spine of the book, but the book is about how American men think about themselves as they grow older. It’s a book about coming to grips with yourself as you approach 60 as an American. I use my own life and how we think about our lives, and eventually come to think about our lives. I use my life as a case history.

Why include your 1995 ride through Vietnam in the narrative as you make your way across North Dakota?

Good question. It is obviously an interruption of the narrative. It was about halfway through, and I wanted to include it because it was pertinent to what I was writing about. You are younger, so you may not recall how pertinent and how important it was whether you went to Vietnam as a serviceman or not. It seized my teenage years and was focused on with a great deal of anxiety. It was a colossally important event in U.S. history and for men of my generation. To have the chance to go 20 years later and on a bicycle, the meditation seemed to belong squarely to a memoir for men of a certain age.

This is a book about getting older. You describe yourself as “perfectly healthy and falling apart?”

I think it has helped me cope. It has given me a huge amount of satisfaction. The ride made me feel – “there’s a little life in the old boy yet.” Then, of course, two years later, I had heart surgery. The whole kind of enterprise of seizing life while it’s available to you, I think is, if that’s the lesson of my trip, was powerfully brought home to me. And much to my surprise helped in dealing with medical issues.

Your view of the rest of the country as a New Yorker is not what I expected. Explain.

I think that New Yorkers really are as provincial as anyone anywhere. We are perhaps, even more so, blinded by how great we think our city is. The old definition is the island off the coast of America. New Yorkers tend to find the rest of the country exotic - exotic in an interesting or non-interesting way. I prefer to think of it as interesting. People live differently from me and yet we are all Americans. If you have any curiosity about your countrymen, traveling by bike is a way to satisfy it.

Would you describe your experiences as patriotic?

Hell yeah. People don’t expect New Yorkers to stand up and salute the flag and say we love this country, but it’s a fabulous place. It’s got its problems. That’s for sure, but it’s beautiful and the people are – you know - I encourage anyone who is dubious about the state of things to take a long bike trip and see how your fellow countrymen receive you. You get away from the ideological and circumstantial relationships. I was very moved by a lot of the people I met on my trip.

Read an excerpt from Chapter 1 of Life is a Wheel below.

Everything Up to the Beginning
Sunday, July 10, 2011, New York City 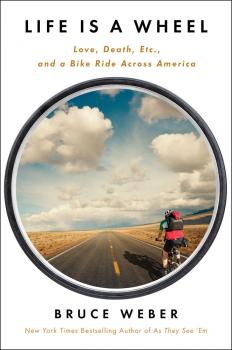 Like you, I’m growing old. It’s harder to remember things, especially good things, the things I want to remember, not so much because my mind is diminishing (hold the jokes, okay?), but because they happened longer ago than they ever did before.
Days seem more alike than they used to, probably because there is an ever-mounting total of them and it’s hard to keep them distinct. This happens to everyone, I know, but I think it’s worse for people who work at a newspaper, as I do, because our work product greets us each day, steady as a metronome, with the date plastered across the top of the front page. Tick. Tick. It’s relentless—Monday, Tuesday, Wednesday, etc., week after week; July 9, July 10, July 11 . . . 2010, 2011, 2012. . . . Egads. How long can this go on?
This week is my twenty-fifth anniversary at the New York Times. Twenty-five years! And, as it happens, for the last three of them I’ve been writing obituaries. Every day, thinking about . . . well, you know. So, here’s what I’m doing about it. Eighteen years ago this summer, I rode a bicycle, solo, across the United States and wrote about it for the newspaper. Starting next weekend, when I fly from New York to Portland, Oregon, and turn back around on two wheels, I’ll be trying to do it again. 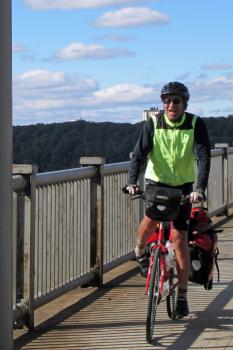 I say “trying.” This is not modest so much as careful, certainly a function of being fifty-seven, my age now, and not thirty-nine, as I was when I embarked the last time, blithely certain of myself and without any of the qualms that are now weighing down the saddlebags in my mind. In short, I had no concept of the length and arduousness
of what lay in front of me. Every challenge—climbing the Rockies, for example, or persisting through the shadeless, sunbaked plains of South Dakota, or rattling over the cold-heave cracks along highways in Idaho and Minnesota that made riding a bike as comfortable as sliding down a miles-long washboard on my ass—was essentially a surprise, and perseverance is, after all, easier for the poorly informed. This time I know exactly how hard I’m going to be working. Does that make me nervous? Sure.
Excited, too. Among other things, assuming I do persevere, I’ll be spending a summer and part of a fall largely outdoors, something New Yorkers in general (and obituary writers in particular) rarely get to do. But mostly it’ll be a chance to relive—well, maybe that’s the wrong word—to revisit an adventure I’d thought, at the time, was a once-only, last-chance, now-or-never thing.
I suppose I can conclude that I’m younger than I thought I’d be at this age. Still, a lot has happened since I last did this, and I expect the trip will give me the opportunity to mull things over. Experiential bookends like this encourage you to take stock, don’t they? Add up the life details?
Off the top of my head, here’s a quick summary: Both of my parents died. My brother had a son. I survived some bad episodes of depression and anxiety, but eventually ended twenty years of therapy and felt better for it. I moved to Chicago and back to New York. I spent four years as a theater critic. I wrote a book—two, actually, if you count the short one for kids. Much to my surprise, I developed an affinity for country music. I traveled on a bicycle in Costa Rica, New Zealand, Italy, Ireland, France, and Vietnam—where I was arrested and spent a night in jail. A handful of sincere and serious love affairs began and ended. I renovated my apartment. Twice.
So what do you think? How am I doing? Read the rest of Chapter 1 here.
Excerpted from LIFE IS A WHEEL: Life, Death, Etc., and a Bike Ride Across America. Copyright © 2014 by Bruce Weber.  Excerpted with permission by Scribner, a Division of Simon & Schuster, Inc.