The extreme weather caused Chicago Tonight producer Josclynn Brandon to get stuck in Lafayette, Indiana on her way back to Chicago from a wedding in Louisville. Read about her experience below, watch a web extra video, and view a slideshow of photos. 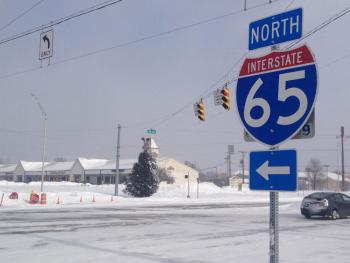 I found out I was moving to Chicago right after the winter storm in February 2011. I remember my father, a Chicago native, asking me if I was positive about relocating to "The Windy City" because the winters I had experienced in my hometown of Indianapolis were nothing compared to what I would endure in his hometown.

Since snow to my ankles and low temperatures were nothing new for me, I chuckled at his question, and thought to myself, “how bad could it be?”

Almost three years later, I'm finally getting the answer to that question.

While driving back from a wedding in Louisville on Sunday, I drove directly into the worst snowstorm in almost a decade; and the worst one I remember experiencing in my 25 years of life. Louisville is almost five hours from Chicago, and about 30 miles south of Indianapolis is when I hit the snow and the 30 mph speed.

Determined to make it back to Chicago before Monday morning, I kept heading north on I-65, not fully realizing just how bad the weather was going to get the further north I drove. My father even called and insisted, more so yelled, that I turn around and stay at home for the night. But with four more hours of sunlight and just over 140 miles to go, I strongly believed that I could make it back to Chicago before the worst was to come.I was wrong. 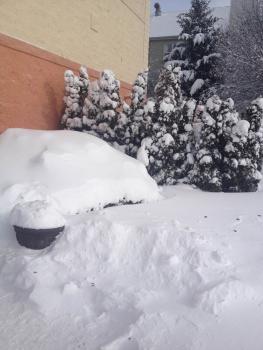 Traffic had slimmed down to one lane and was moving at 25 mph. The snow was starting to fall more quickly, and it took almost a half hour to travel 10 miles. Looking to the left and right, all you could see was snow, and cars and semi-trucks, that were among the unlucky who got stuck.

Clutching my steering wheel tightly with both hands and freaking out a bit, I was on the phone with my mother who was trying to calm me down. For the most part it worked, except for when I could hear the local news station in the background giving updates and encouraging people to move off the roads immediately. That's when my parents and I made the decision for me to get off at the next major exit and stay at a hotel for the night.

And then it happened. I got stuck in the snow on my way to the hotel.

Have you ever seen the itty bitty girl looking silly trying to fix her car? Well, that was me. Fortunately, a couple of guys pulled over and using a shovel and a window scraper, we dug and pushed my car out.

Finally settled into my home for the night in Lafayette, Indiana, I had to get weather updates from my family and friends because the hotel's TV and internet were down. That's when I found out that I-65 would be closing. Thinking it would only be for a few hours so they could plow, I set the alarm clock to wake up early the next morning to hit the road to make it to work on time.

I was wrong about that, too.

When I woke up at 6:30 this morning, the interstate was still blocked by a pile of snow and stop signs. The hotel's manager said one employee called in, saying police were out telling people to stay off the roads. I decided to wait a few more hours until the sun came up and try my luck again. That's when I called the Lafayette Police Department and the woman who assisted me stated I-65 wouldn't be opening anytime soon. It's starting to look like I'll be spending another night in this hotel room.

With a -11 degree temperature, slick roads and blowing snow, I think I can now say this is how bad it can be; and unfortunately it can still get worse. But there are a few things I learned over the past 24 hours when it comes to Chicago, and now Indiana winters.

Always have a shovel and window scraper in the trunk of your car. Invest in a long puffy coat, with a hood, and snow boots that come to your knees. Last and most importantly, when your father yells at you to turn around and come home -- do it.

Check out Josclynn's video below: