The Merit School's Suzuki-Alegre String Ensemble, a diverse group of young violin and cello players, joins us on Chicago Tonight at 7:00 pm to perform in-studio, fresh off their recent trip to Japan. View behind-the-scenes photos of the string ensemble's in-studio performance.

We spoke with Tom Bracy, executive director of the Merit School of Music, to learn more about the history of the school and the ensemble's Japanese excursion. 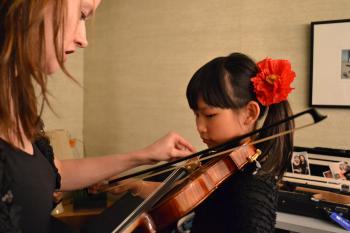 Tell us a bit more about the Merit School of Music. When was it founded and how did it get its start?

The Merit School was found in 1979 by two very visionary women: Emma Endres-Kountz and Alice Pfaelzer. The school was started because the Chicago Public Schools eliminated instrumental music from the elementary school curriculum. The school was founded offering free instrumental music instruction, and its first program was called the Tuition-free Conservatory. Today, the school has 6,000 students, 2,400 on-site, and we offer everything from on-site classes and private lessons to our off-site Bridges program.

What is the mission behind the school?

We try to change the lives of children by using music as a vehicle to do so. We don’t expect all of our children to become musicians, but we hope that the skills that they learn through music will enhance their lives and enhance everything that they do. We have 50,000 alums and they’re not all musicians, but we’re very proud of what they do.

What kind of students does Merit look for and where do these students come from?

The students come from all over the city, and from as far away as Wisconsin and Indiana. We look for students that are interested in studying music, and that are interested in broadening their horizons. We’re there to meet the student where they are musically and help them grow. Through our in-school programs, we hope to enhance the community in some way, and we hope to be invited in. The longer that we can be involved with these students in the community, the more impact we feel we can have. 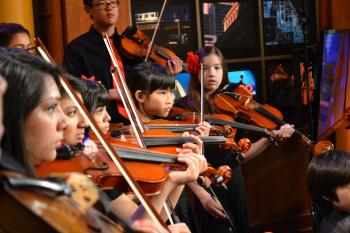 As a means to impact kids with valuable life skills, why do you feel music is so effective? What are some of the tools that the school aims to instill in its students?

Music allows us to teach cognitive learning, discipline, a sense of community and a sense of responsibility. It’s relevant to so many other courses in school, from English to math to history. One of the first things you learn at Merit is that you’re part of a community. So whether it’s us out in the communities or students moving into the Merit school, it’s an opportunity for them to be around others interested in the same things. There are kids from all socioeconomic backgrounds, but all they care about is music. They don’t see anything else. We’re what they call a community music school.

The school’s Suzuki-Alegre Strings Ensemble just returned from a trip to Japan and is performing on Chicago Tonight this evening. What’s unique about this group of young performers?

The program is based upon the Suzuki method of string training that originated in Japan. Alegre strings means “happy strings” in Spanish. So the Suzuki-Alegre method uses the Suzuki method, but it’s infused with Latino culture. In the Suzuki method, a key part of the program is based on mentoring, and the parents or guardians have to be involved in the students’ lessons. Likewise, the family is very important in the Latino culture, so this family-centered method was a natural fit. These 19 students were selected from a larger group of 250, many of whom have been with us for many years and some who are on their way to college. Choosing the students was a difficult decision, and was based on how long they’ve been a part of the program, their level of commitment, and their performance level. 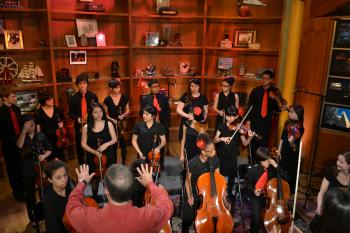 What was the purpose behind the group’s trip to Japan?

This was the 16th annual Suzuki convention. Annually in Matsumoto, Japan, there’s a convention for teachers and students of the Suzuki method to enhance their training. The convention asked our children to perform and use our Alegre model to perform on stage. We also did a side-by-side at another school and performed with them. They went for an educational opportunity and performed in front of an international crowd. They got to do some sightseeing; they visited Matsumoto castle and got to experience the food and culture. Some of these kids would never have had the opportunity to leave their neighborhoods, and for many, it was their first time on a plane, so that was neat.

Do you see these students as musical ambassadors? Have they embraced that role?

Absolutely. Since they’ve come back, they’ve really changed. They were close before they left but something about the trip was magical. Just hearing about how they took care of one another and helped out…They had relationships before they left, but I’d say they have lasting relationships now. They’re like this cool, hip rock group that’s part of our school, which is pretty cool when your curriculum focuses on classical music. They know it’s an honor and a privilege to be a part of this very special group.