A new PBS documentary takes a look at a group of artists enlisted by the military to trick the enemy during World War II. Rick Beyer, the director of The Ghost Army, joins us on Chicago Tonight at 7:00 pm. View a slideshow of images from the film.

We spoke with Jack Masey, a veteran of the 603rd Engineer Camouflage Battalion, also known as the Ghost Army. 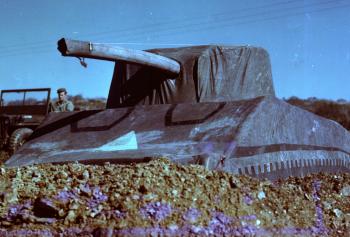 Tell me a bit about yourself. How long did you serve in the U.S. Army and where were you deployed during World War II?

I’m 88 years old and will be 89 in about three months. I’m originally from Manhattan. I served in the army for almost three years, from 1942 to 1945. I was with the 603rd Engineer Camouflage Battalion. We were first sent to England and while there, we worked with the British, who taught us a great deal about camouflage. After being there for a few months, our battalion set off for Normandy and landed on Omaha beach, about two weeks after the June 6th invasion.

For those who don’t know, what was the Ghost Army? Whose idea was it to create what was essentially a fake army?

The 603rd Battalion was the “Ghost Army,” and it consisted of three major elements. One was the inflatable army, which I was a part of; we were responsible for setting up inflatable equipment, like tanks and guns. The second part was sonic deception, which blasted sounds of tanks, trucks and other military equipment moving around. The third consisted of a number of things, including delivering fake radio messages in the hopes that it would be picked up by the Germans. Disinformation, let’s call it. We would go to small towns across France and act like we were part of the 2nd Armored Division, which of course wasn’t there at all.

A number of people had things to do with it. The British had practiced this deception in North Africa and one of the reasons they ultimately beat General [Erwin] Rommel in Africa was by using this fake army. So, the British had learned a lot about the effectiveness of deception. Churchill had a memorable quote in 1943 that said, “In wartime, truth is so precious that she should always be attended by a bodyguard of lies.” We were the liars, the protectors.

How did you end up as part of the Ghost Army?

As a very young kid in Brooklyn, my junior high teacher was fantastic and felt that I had talent as an artist, and she told me about a high school in Manhattan called the High School of Music and Art. The whole purpose of the school was to pick students who had talent in music and art and get them to refine these talents. I would take the subway from Brooklyn an hour and a half to Manhattan, and I was lucky to be among the 30 that they picked to attend the school. After school, World War II was at our doorstep and when I was recruited by the army, they wanted to know what skills I had. They wanted people in camouflage units who had a feeling for how the visual world worked, and they felt that artists had more of a sensitivity to visual objects than non-artists.

When were you briefed on the mission you were embarking on? What did you and the other G.I.’s think about the idea initially?

Initially, we were just told we would be experts in camouflage. We would learn how to camouflage a real tank and after we learned how to do that, our mission would be to teach other troops. That changed right after we got to England. There, we were told that we would no longer be camouflage experts, but would be involved in drawing enemy fire, which didn’t make us very happy by the way. We were told we would be creating a rubber army made to look so real that the enemy would think that army was somewhere that they weren’t. It was decoy work, with fake tanks, fake truck and fake guns. 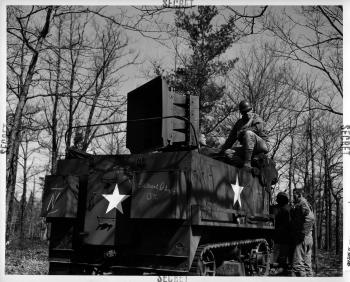 What was the Ghost Army’s first mission? What sort of diversions did you use to trick the enemy?

The major mission shortly after we got to France was to confuse the enemy in Brest, France. Brest was occupied by Germans in 1944, and they had huge coastal guns at the time. We were called in to simulate a huge American outfit that would pin the Germans in Brest and not let them move out. From all accounts, we were reasonably successful at tricking the Germans into thinking we were a larger outfit than we were. We used all the components and methods of deception to convey to the Germans that we were not who we were.

How did you set up all of the inflatables and other components of the army?

The tanks were manufactured in the states by Goodyear and some other companies. An M4 Sherman tank, that normally weighs 40 tons, was shrunken to about 60 pounds. It was made up of a series of tubes that would inflate when compressed air was pushed into the tubes. Occasionally we had to use bicycle pumps to inflate them, or, if we didn’t have those, sometimes just our lungs. It usually took about four men blowing about an hour and a half to inflate one. From about 200 yards away, it was pretty realistic-looking. We were given very strict instructions about handling the inflatables in France. We were told to never cross the road with an inflated Jeep.

In all, how many missions of this type did the Ghost Army execute during the war?

Fifteen or 20 missions in different parts of France. Near the end of the war, we ended up in Luxembourg, which was right in the area near where the Battle of the Bulge happened. And while we didn’t have to confront the Germans, we did have to get out of town in a hurry. The Germans thought they could do a surprise attack on the allies in Northeastern Europe, but it never worked. We had a terrific force of paratroopers and others who counterattacked and destroyed the whole German army.

When the Bulge happened, we had been doing minor installations around the Luxembourg area. We had just done something nearby and were back in town taking a break for a week when we got news that the Germans were coming. We didn’t have any real weapons at all, so we got out of town and headed for safety. Once the Germans were defeated, we returned. In March 1945, the Germans were almost in full retreat on the western front and on the eastern front because of the Russian counter-offensive. Germany was now being bombed daily, especially German port cities. So, as we got into Germany, we reached a town called Aachen, and it was just in shambles. That was where we ended up when the Germans were finally defeated in May 1945.

After the war, we were shipped back to Florida to get ready for a possible deployment to the Pacific. We were never deployed because of the nuclear bombing of Nagasaki and Hiroshima. We had no idea how gruesome the bombings were, but to us it was terrific news that the war was over. We were selected out and I came back to New York. It was the happiest day of my life to be selected out of the army. 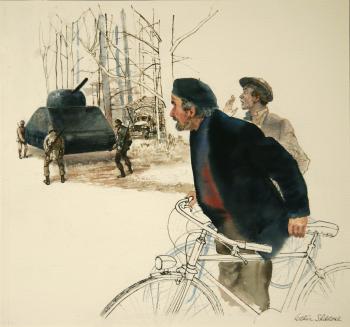 Did you go on to pursue a career in art after you were done with your military service?

When I was given my honorable discharge, I was told I’d be eligible for the GI bill, so I applied to Yale and was accepted at the Yale School of Art and Architecture. So for four years, Uncle Sam picked up the tab for my tuition, and we also got a certain amount of money for lodging and food. It was extraordinary and a terrific gift for our service. I never could have afforded it on my own.

Yale led me into the Foreign Service. In 1951, after I had gotten out of Yale, I got a call from the State Department asking if I was interested in joining as a Foreign Service representative. My specialty was setting up exhibits about American art and how we live. I did that for five years in New Delhi. Then, for a major six-week exhibition in Moscow in 1959, I built the kitchen for the famous Khrushchev-Nixon “Kitchen Debate.”

After doing the ‘59 exhibition, I did a number of traveling exhibitions all over the Soviet Union. These were little exhibits we had agreed to exchange with the Soviets. I did these until 1964, before I was assigned to design the U.S. Pavilion for a world exposition in Montreal. I did another major exposition in Osaka, Japan three years after Montreal. For that, I designed a huge, inflatable pavilion that covered an area the size of two-and-a-half football fields. In 1970, it was the largest in the world at the time.

Afterward, I was assigned to Washington to be the design director for the U.S. Information Agency. I did that until I left in 1979; I loved working for the government but I had had my fill.

In 1980, I started a partnership in New York and we got major jobs in the private sector, including the renovation of the information center at Ellis Island and at the Statue of Liberty.

View a trailer for the documentary: