Dyeing the Chicago River green for St. Patrick’s Day has been a city tradition since 1962. And it’s been a family tradition since its inception. Meet the men who turn the river bright green each year as we revisit our March 17, 2004 story.

John Callaway:  There are politicians and bagpipes and dancers—and bagpipes, and floats, and bagpipes. You get the picture. It’s the one day in Chicago when everyone gets to be Irish, and there is one St. Patrick’s Day tradition that Chicago is known for.

For more than 40 years the city has been dyeing the Chicago River green. That process begins early Saturday morning when Mike Butler and his river dyeing crew gather at the North Branch of the river around Division Street.

Mike Butler: We’re getting all of the boats ready for the dyeing of the river and that looks like a simple operation, and it isn’t.

Callaway:  Butler is a former assistant Chicago port director, and dyeing the river is a family tradition for him and Tom Rowan, the recently retired Cicero police chief and a former Chicago cop.

Rowan’s father was on the original river dyeing crew, and Butler joined him a few years later.

Tom Rowan: It’s a family thing. Butlers and Rowans—it’s a traditional thing and that’s very important with the Irish, the tradition. 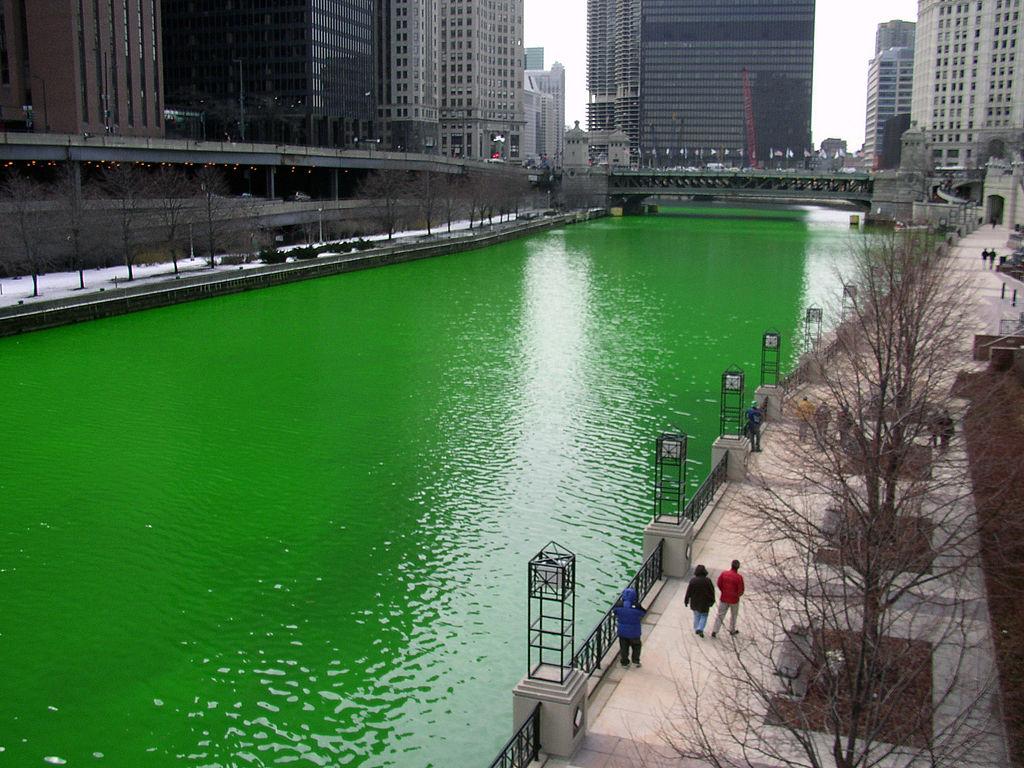 Callaway: The crew is rounded out by two of Mark’s brothers-in-law. The dye job is sponsored by the plumber’s union which also organizes the parade. The plumbers pay for the dye, the boats are on loan, and Butler and his crew are volunteers.

Here, behind the city sanitation facility near Division Street, workers from the city’s transportation department lower the crew’s two boats in to the river.

Mark Butler: This is a canister of dye. It’s about 45 pounds, it’s a powder form. It’s almost like orange Tang is what it looks like, so before it gets wet it’s actually orange and then once the boat hits it, blends it up, mixes it, it turns to the bright green.

Callaway: And so with a canister of dye safely aboard, and the boat safely in the river, Mike Butler and his crew head south.

According to newspaper accounts, 1962 was the first year the Chicago River was dyed green. The idea originated with the business manager of the plumber’s union, Steven Bailey, who just happened to be a good friend of Mayor Richard J. Daley.

There are many stories of exactly how Bailey got the idea. One account says that plumbers working on the construction of Marina City were trying to trace a wasteline that was emptying into the river. They came to see Bailey and they were covered in the green dye they were using for the job.

Jim Sullivan, parade chairman: From there Steve Bailey, who was Barnum & Bailey type thing of Chicagoland at that time, decided he was going to try and dye the river green from that point on.

Bob Ryan, St. Pat’s Day Queen contest chair: He had the idea that he wanted to not just dye the river, he wanted to dye the entire lake. So he brought the idea to Mayor Richard J. Daley and posed it, and the mayor realized there was no way he was going to be able to dye the lake, so he went along with dyeing the river.

Callaway: According to parade organizers, the first year that Bailey and Daley had the river dyed 100 pounds of fluorescein dye was used and the river stayed green for a week.

Today, 40 pounds of a harmless vegetable dye is used and the color lasts most of the day, depending on the river currents.

But back in 1962, Steven Bailey reported with a bit of Irish blarney that dyeing the river green would be Chicago’s present to Ireland. He said the green of the Chicago River would flow down to the Illinois, which in turn would travel to the Mississippi, out in to the Gulf of Mexico and up the Gulf Stream across the Atlantic up to the Irish Sea.

The Ireland trip was unusual because Chicago generally wants to keep this tradition to itself. The exact formulation of the dye is a closely guarded secret, and Butler and his crew have turned down numerous invitations to color rivers in other cities, preferring to keep it a Chicago tradition.

Back on the Chicago River, Mike Butler and his crew arrive at the staging area at Wacker and Michigan. Mike’s wife Marlene and other family members are there to socialize and help fortify the crew.

Mike Butler has five daughters and one son, but the girls aren’t allowed on the boat. Something that really rankles the Butler daughters. 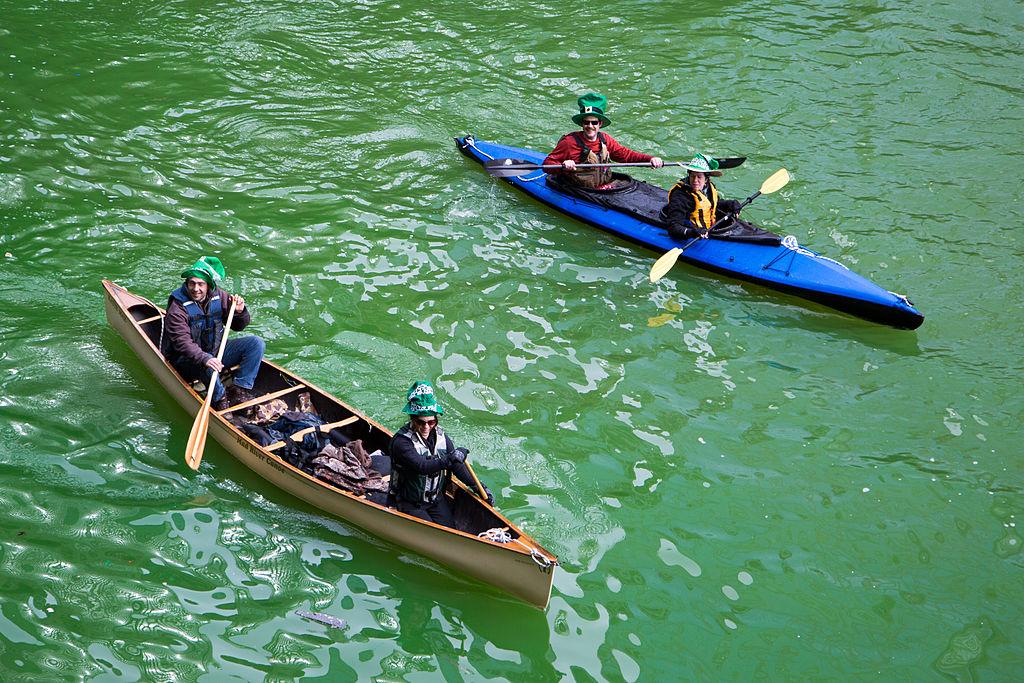 Mike Butler: No. I will not have this treason in my house. There will be no treason. No girls on the boat as long as I’m around.

Callaway: At around 10:35 a.m. it’s time for some last minute strategizing.

Callaway: By 10:40 a.m., thousands of people have lined the area between Michigan Avenue and Columbus Drive ready for the moment.

The river dyeing crew heads to its position under the Columbus Drive Bridge. At 10:50 a.m. Chicago’s Shannon Rovers Irish Pipe Band strikes up an Irish tune, and they’re off.

Mark Butler: What’s really heartwarming, and I don’t mean to sound whatever—what’s truly heartwarming is when you’re coming down the river and the crowd sees you. I mean, they go wild. It’s like a touchdown at a Bears game. They just yell and scream.

Callaway: After about 20 minutes on the river, Mark Butler was ready to reflect on another job well done.

Mark Butler: The wind or something is working today. I don’t know what it is but we have a lot of dye left and we’ve already covered what we had to do today.

Swallow a little bit of it, but I’ll be sweating green—doing something else green for a few days but we’ll work on that later. It’s part of the job duty.

Callaway: The crowd along the river certainly appreciated that job.

Onlooker: I was just breathless, I was like (gasps). It was just like it reminded me of the 40 shades of green in Dublin.

Onlooker: I thought it was incredibly green. I didn’t realize it would be this green.

Onlooker: It brings out the heritage and it’s really impressive.

Onlooker: The color of this is just gorgeous. It’s just, I don’t know, I can’t really explain.

Callaway:  At 11:45 a.m. the river dyeing crew jumped back on their boat to add a final dash of color, and the promise to be back again next year to keep a uniquely Chicago tradition alive. 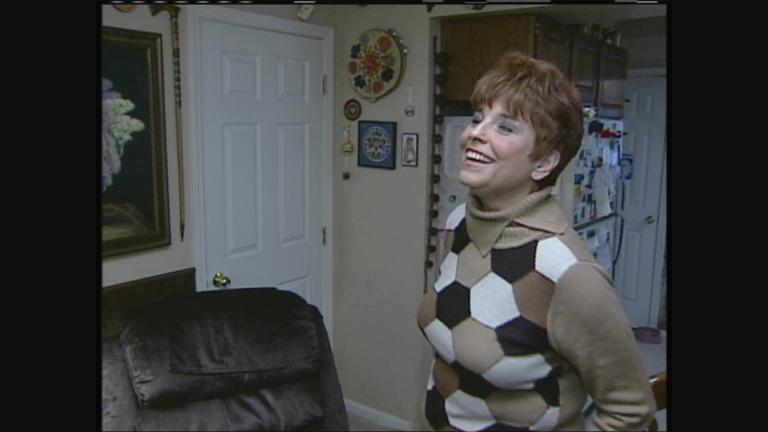 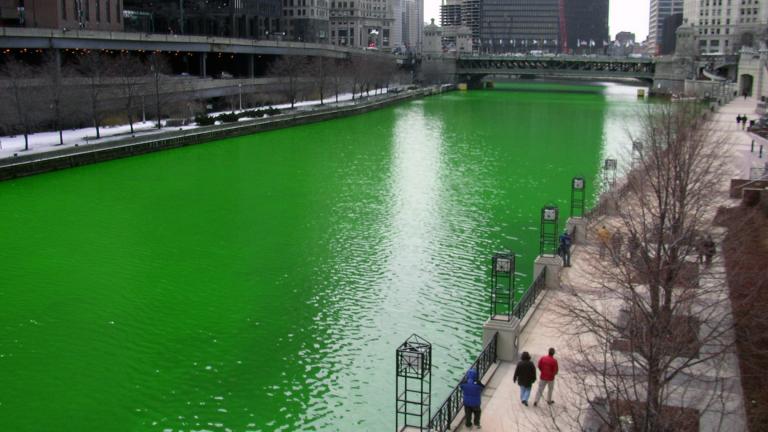 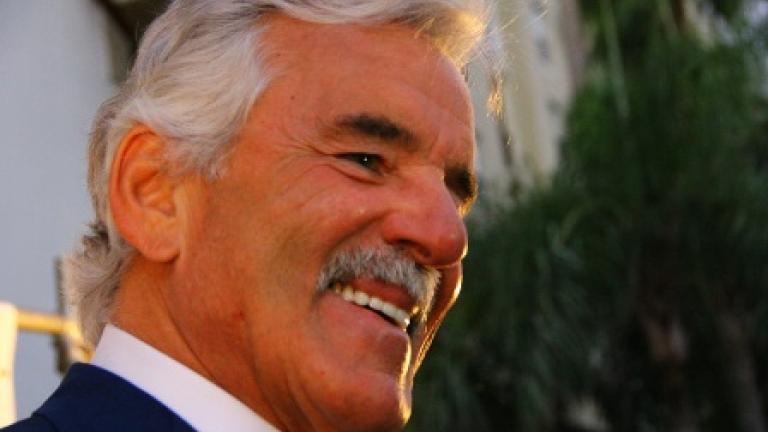