How long did Chicago have gas streetlights? What happened to a beloved collection of Civil War artifacts that was once at the Cultural Center? And what was the "suicide bridge" in Lincoln Park? Geoffrey Baer has the answers in this week's edition of Ask Geoffrey.

When was the last gas streetlight extinguished in Chicago? Growing up in the '40s at Cicero and 59th, I recall a lamplighter roaming our streets at dusk. 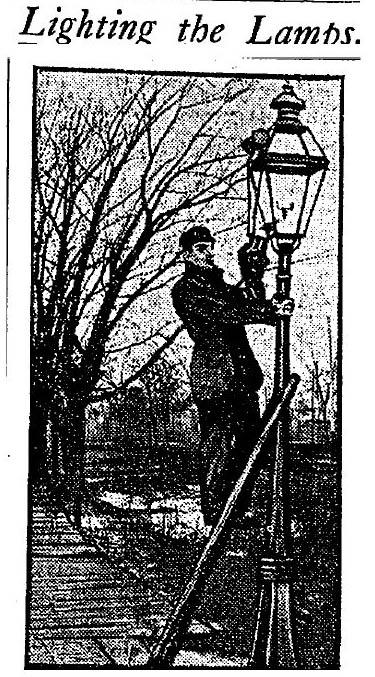 A photo of a streetlamp lighter in a 1903 edition of the Chicago Daily Tribune. The last eighteen gas streetlights in Chicago were lit June 4, 1954, on the southwest side, on Escanaba Ave. between 95th and 99th to be precise. As recently as the ‘40s, there were thousands of gas street lights in Chicago. Where gas lines were not available, there were gasoline street lights, with a small reservoir inside the light. What could go wrong?

The Chicago Tribune featured an article about a lamplighter who may have been the very one our viewer described. The article from August 9, 1947, featured Domenico Basso lighting a street lamp at 59th and Cicero, which is where our viewer said he saw the lamplighter in action. He was one of fewer than twenty lamplighters still working in the 1940s.

Chicago introduced gas lamps in the 1850s, but by 1898, the city had already decided to replace them with new electric streetlights. Because of the cost and complexity of building new electric lines and circuits, the update took half a century to be completed, so the lamps that were still around in the 1950s had been installed before 1900.

Lamplighters became dinosaurs even before electricity because the gas lamps had pilot lights with timers and igniters inside. The timers were simply little clocks that needed to be rewound once a week.

Lamplighters were still needed for those gasoline lamps. The lamplighter would come by every night, refill the lamp with gasoline, and light it with a blowtorch. We hope they received hazard pay for that task.

When the Cultural Center was the Chicago Public Library they had a wonderful Civil War memorial. What happened to all of the items? 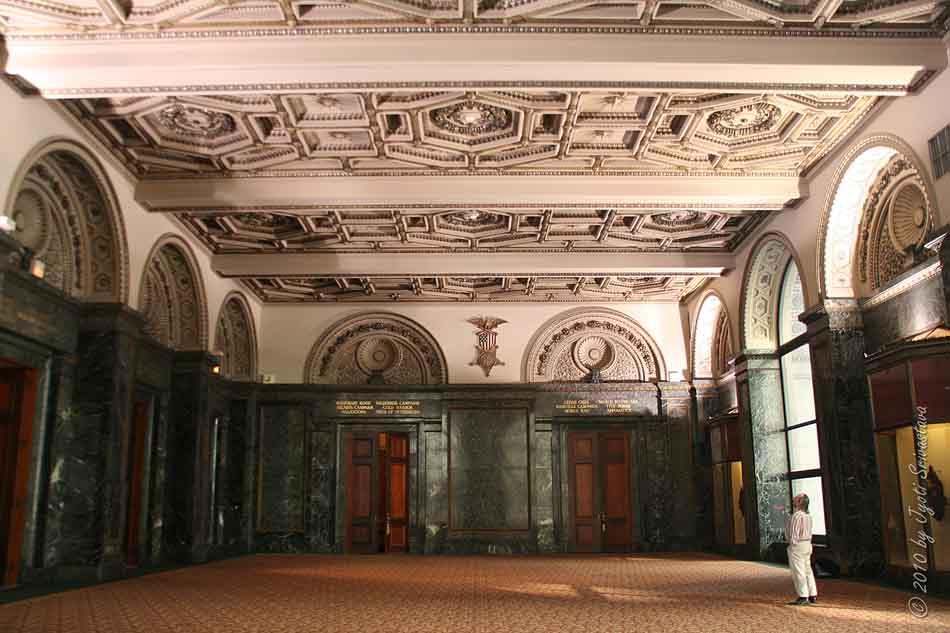 Many of our viewers fondly remember this collection, which is now housed – and lovingly cared for – in the Chicago Public Library Special Collections Department, on the ninth floor of the Harold Washington Library.

The collection includes Union Army Civil War memorabilia. There is a wanted poster for Abraham Lincoln’s murderer, George Armstrong Custer’s hat, a bugle, battle flags, medal swords, campaign buttons and even a cannon. Some of these items are displayed in original display cases emblazoned with a GAR insignia.

Most of the items are held in special storage and are taken out only for special exhibitions like the recent ones commemorating Abraham Lincoln’s 200th birthday and the 150th anniversary of the Civil War.

The building that formerly housed the public library, now the Cultural Center, was built in 1897 on military land that was at one time part of Fort Dearborn’s reservation. The GAR, which was the Grand Army of the Republic, the Union Army veterans’ group had a Soldiers’ and Sailors’ home on the northern quarter of that lot. The GAR was the Union Army veterans group, and thousands of those vets were still alive in 1897. In order to get permission to construct the library on that land, the city had to promise to “build and maintain a war memorial hall in the library in perpetuity.”

The collection was displayed for decades. The library board had long fretted over the GAR’s lack of preservation or care of the items in the collection. The room had no control over dust or humidity, and some items remained in direct sunlight. The GAR occasionally even used actual Civil War flags from the collection in parades and other gatherings.

When the library was converted to the Cultural Center in 1978, the items were removed and eventually moved to the Harold Washington Library. The Cultural Center still has the very ornate GAR Hall, which is now used for hosting special events.

While thumbing through “Chicago” books, I ran across some photos of a large steel bridge over the Lincoln Park lagoon. Can you tell us more about the bridge? 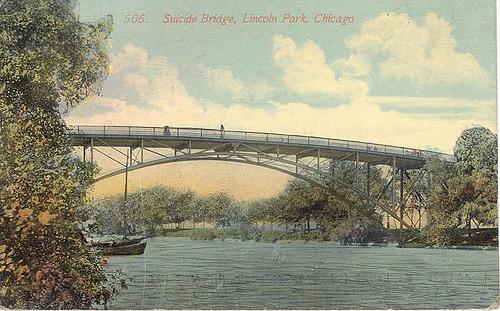 Just when I think I knew everything about Chicago…

This was called the “Suicide Bridge.” It was a four story bridge over Lincoln Park lagoon south of Fullerton and east of Lincoln Park Zoo. It connected Lincoln Park to the lakefront at the time when Lake Shore Drive was a carriage route rather than an expressway.

It was simply called the High Bridge, built in either 1892 or 1894 to be tall enough for sailboats to fit underneath. 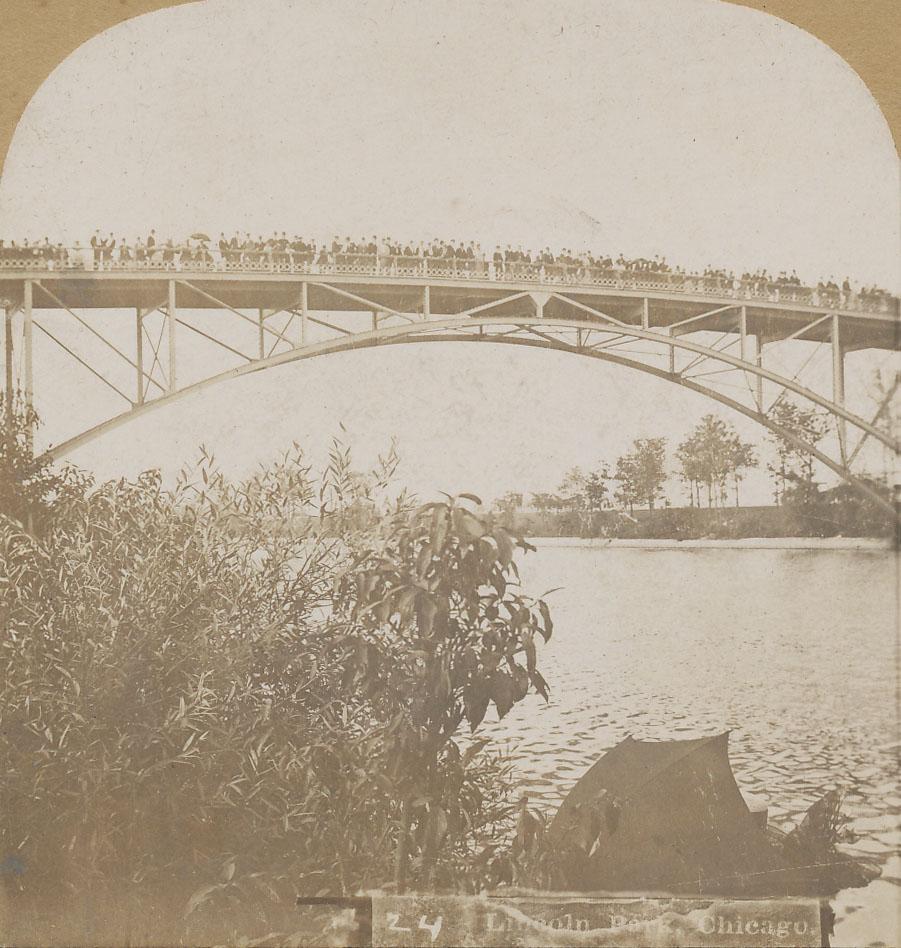 The bridge offered spectacular views of the lake, but unfortunately also became the choice location for people wishing to end their lives. There are dozens of accounts of people throughout the years leaping over the bridge. Soon, the press was widely calling this the “Suicide Bridge.”

In 1916, amateur movie-makers shot a chase scene on the bridge. The characters were to fall from the bridge, but a stunt man they hired refused to jump, saying the water below was too shallow. The amateur actors decided to do it themselves and both survived.

The Park District became greatly concerned, and talked about fencing the bridge over or tearing it down. It survived until 1919, when it was finally torn down. By then, the bridge became so rusty that anyone going across it risked his life.