Getting Used To Chicago 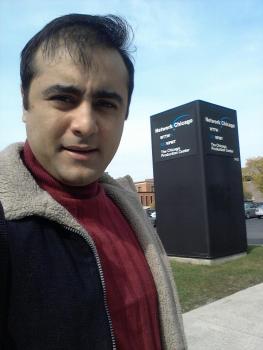 I am over the jet lag now, sleeping properly for eight hours. Initially, I used to sleep at 11:00 pm and wake up at 4:00 am, but now I finally have been able to adjust to the timings. Finally, I’ve been well-accustomed to the rail system, and reaching my office and back to my hotel is now a piece of cake.

I would like to share some of the things that I see every day when I take the journey to the office: 80 percent of the people I see on my way, from young to old, have headphones in their ears. Some of them are even shaking their heads to the beat of the music they are listening to. I know this must not be a big deal for the readers in the U.S., but in my country it’s a bit awkward, as people on public transportation are more vocal, and prefer talking to each other rather than just listening to music. People here are so involved with their phones or iPads. This behavior totally changes when I reach the office; people are more welcoming and warm to greet you.

Yesterday, I had my first chance to go out on an assignment with one of my colleagues, Eddie Arruza. We visited a hospital, and it was my first visit to an American hospital. During the visit, I was told by a doctor there that they are running a program to control diabetes in neighboring African American and Hispanic communities. Apart from this discussion, I also had an insight about how Chicago is considered as one of the most segregated cities in the country.

Karachi, the city where I work, also faces the same issues and it has taken an ugly turn, and there have been targeted killings also. One ethnicity is blamed to target the other, and the city has suffered deaths numbering in the hundreds at least, if not thousands. The politicians are blamed time and again by the media that they haven’t done enough to stop the killings, but still the killings continue, and we have no-go areas in the city where one ethnicity does not feel safe to enter the others’ neighborhood. It feels sad to know that even after so many years of political maturity and technological advances, humanity still suffers from stigmas like these.

The mayor of Chicago is coming on our show as a guest today; maybe I’ll be able to get an insight about how they tackle such issues.

Last but not the least: The Food. I have traveled to more than 15 countries in the world, and it has always been my principle that I only eat the local food from the country which I visit; avoiding the Pakistan/Indian food even if it’s available. So, following the same rule, it’s been burgers and sandwiches all along. The menu available at the fast food chains is different from the ones we have in Pakistan. Breakfast is almost never taken at the fast food restaurants, but over here people do have a tendency to drop in for their quick snack, and coffee is absolutely compulsory, especially if one has to survive the chilly weather of the windy city.