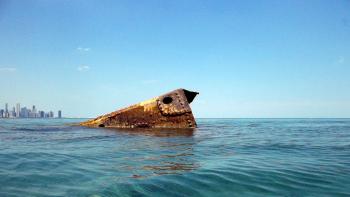 Our early fall chill has dropped the temperatures of both the air and the water. Both were warmer last month when swimmer Greg Lane showed us the closest swimmable shipwreck to Chicago's shoreline.

It’s favored by cormorants and gulls as it pokes through the surf about 200 yards from the 49th Street Beach. It's not a rock; it's part of the boiler from a ship that went aground on the infamous Morgan Shoal in July of 1914.

“After efforts by the U.S. Life-Saving Service, the precursor to the Coast Guard, to pull the ship off the rocks, the lake kicked up the way it can, it knocked the ship over, broke it up. The boiler was on at the time and some of the ship caught on fire, and she was lost. That was July 18, 1914,” said Greg.

The Silver Spray was a 109-foot long wooden steamship built in 1894, and originally named Bloomer Girl. Her home port was Chicago, and she ferried passengers up and down Lake Michigan's southern shoreline. That's what she was doing on that fateful July day in 1914.

“She was on her way to pick up 200 University of Chicago to take them on a tour of the Gary Steel Mills. Never made it, obviously,” said Greg.

Nearly 100 years later, debris from the wreck of the Silver Spray still lies less than 200 yards from shore. Though it’s the shipwreck closest to the Chicago shoreline, few people have any idea that the remains of the steamship are just off Lake Shore Drive. 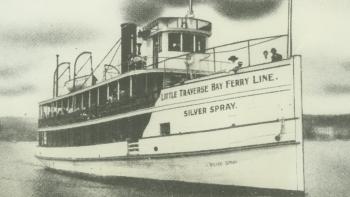 Greg, who swims in the lake year-round, would like to change that.

“After I discovered for myself this shipwreck and learned that other people knew about it, I just started swimming once a week out here just to find more parts, to learn more about it,” he said. “It's really fascinating to see, and I wanted to share it with other people. I wanted other people to know about it.”

Greg now gives free underwater tours of the remains of the Silver Spray every Sunday morning. On this day, his family and friends joined him for the swim out to the boiler, the most obvious relic from the steamship.

“What you can see sticking out of the water there is part of the boiler and firebox. It's like an iceberg. What you see above the water is much, much less than what’s underwater, which is a huge structure with the tank and firebox,” said Greg. “And then about 50 yards away is the drive shaft and propeller. And the propeller is as tall as I am, these massive blades. The drive shaft is 50-feet long.”

Greg's 7-year-old son Goodwin has become just as fascinated by the wreck as his father.

“Once you get out there, there's another piece right behind the boiler which is really fun to stand on,” said Goodwin. “There were a lot of algae plants on the outside, so it’s really slippery to climb up. But once I got up, you can see pretty far out on the lake.” 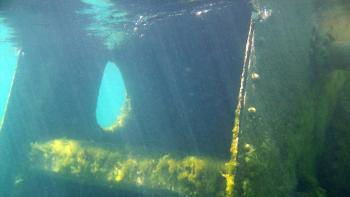 Along with the Underwater Archeological Society of Chicago, Greg and other volunteers are working to create an underwater survey of all the area shipwrecks, including the Silver Spray.

The bedrock limestone shoal where the Silver Spray met its demise is as intriguing to Greg as the shipwreck itself. The slightly brown water marks the shoal, which stretches about a half mile into the lake and ranges from 3 to 8 feet deep. The rocky shoal is unusual since most of the lake has a sand bottom.

“Morgan Shoal is a 300-million-year-old limestone structure presumably formed by the glaciers that formed the lake, and it is the closest near shore shoal on Chicago's shoreline; utterly unique,” said Greg. “This is one of the seven wonders of Chicago, between the shipwreck and the shoal and Pebble Beach. It’s a great place to take kids. It’s beautiful. It is one of the best places to swim in the city. I encourage everyone to come out.”

Greg’s wife Mary first got him into swimming. She doesn't swim year-round as her husband does, but she too loves to swim above the shoal.

“The shoals are limestone and they grow this beautiful, wavy green grass. So, as you’re swimming above it, it’s this undulating green carpet filled with little fish darting in and out,” said Mary. “It feels completely tropical, and so just like when you're snorkeling in a tropical area, I can swim literally for miles and just lose myself. It's really beautiful.” 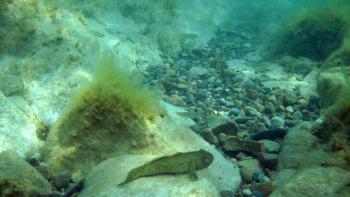 The Chicago Park District has proposed plans to extend park land by building out over the shoal. The prospect horrifies Greg who has a very different idea for the area's future.

“To create a sanctuary for swimming, for any kind of non-motorized recreation, for the ecology out here, for the migrating birds, that goes out half a mile, which is the length of the shoal and south on the lake shore,” said Greg, “I'd love to see this area featured, and enjoyed by Chicagoans and by visitors to Chicago.”

July 2014 will mark the 100th anniversary of the loss of the Silver Spray. Greg Lane says that’s the perfect date to open Chicago's first underwater sanctuary.

Lane has approached the Field Museum with his idea for an underwater sanctuary. He also hopes to enlist support from the Chicago Park District, the University of Chicago and other conservation and environmental groups.

View the photo gallery and read the Morgan Shoal Project plans in the PDF below.