When Dr. Laura Berman, host of OWN's In the Bedroom with Dr. Laura Berman, found out she had a form of "precancer" in her left breast early this year, she says she considered herself relatively lucky. She needed a mastectomy, but the cancer was caught very early.

"I do not need chemotherapy or radiation, and am now considered as cancer-free as the next girl," wrote Berman, who is also a professor of clinical obstetrics and gynecology at Northwestern University's Feinberg School of Medicine.

But months later, during a routine follow-up, she found out her cancer was HER2 positive--the cancer had a protein that promotes the further growth of cancer cells, making it more aggressive and less receptive to hormone treatments. Berman would have to undergo chemotherapy after all.

While not the most pressing issue, her thoughts turned to her hair, which she would have to shave during her chemo treatment. Her husband and her two youngest sons soon shaved their own heads to welcome her into the "bald club," and she began to draw strength from her baldness.

"What I have discovered it that without my hair, I feel more authentically myself than ever before," she wrote. "I no longer have a shield between me and the rest of the world. It is amazingly empowering to let go of something you think defines you, only to discover a truer version of yourself without it."

But many women don't "embrace their inner bald chick," Berman says, and she hasn't seen a bald women during her treatments without a scarf, hat, or wig covering their head. Berman joins us on Chicago Tonight at 7:00 pm to share what she's learned about being bald, and why some women worry about going bald in public. She also spoke with us about her treatment.

You wrote that when you were considering getting a second opinion about your diagnosis, you were "worried about hurting feelings or offending" your medical team. As a doctor yourself, is that something that would offend a doctor?

No, I wouldn’t be offended. But it’s a common reaction. For women, it’s more common. It’s a social response. Women are pleasers and we don’t want to offend. Doctors were seen as God 30 years ago, but even today there’s a feeling, "These people know a lot more than me, so I want to trust them or don't want to let them think I don’t trust them." In my case, my surgical team at Northwestern encouraged me and helped me find second opinions. Doctors aren’t going to be offended if you come with questions. And if they are, you should find another doctor.

You wrote that after your first diagnosis, you had "a new level of emotional clarity and awareness" that you called "the gift of cancer." Did having that realization and those struggles months ago make your latest diagnosis easier to process?

It all helped. On the one hand, it was totally unexpected. I thought I was done. But I had already been looking at some of those questions. I was in a state of mind to embrace what I needed to do to get through the chemo. I had already been through the process of getting over the guilt of making myself the main priority, and the guilt of asking for help, of telling everyone to take a hike when they weren’t needed. I ramped it up a lot—you have to be even kinder to yourself when you’re going through chemo—but it helped. It would have been fine either way, but it teaches you about valuing your time.  I had to get un-shy and unembarrassed about being a burden, which is tough for a lot of people. 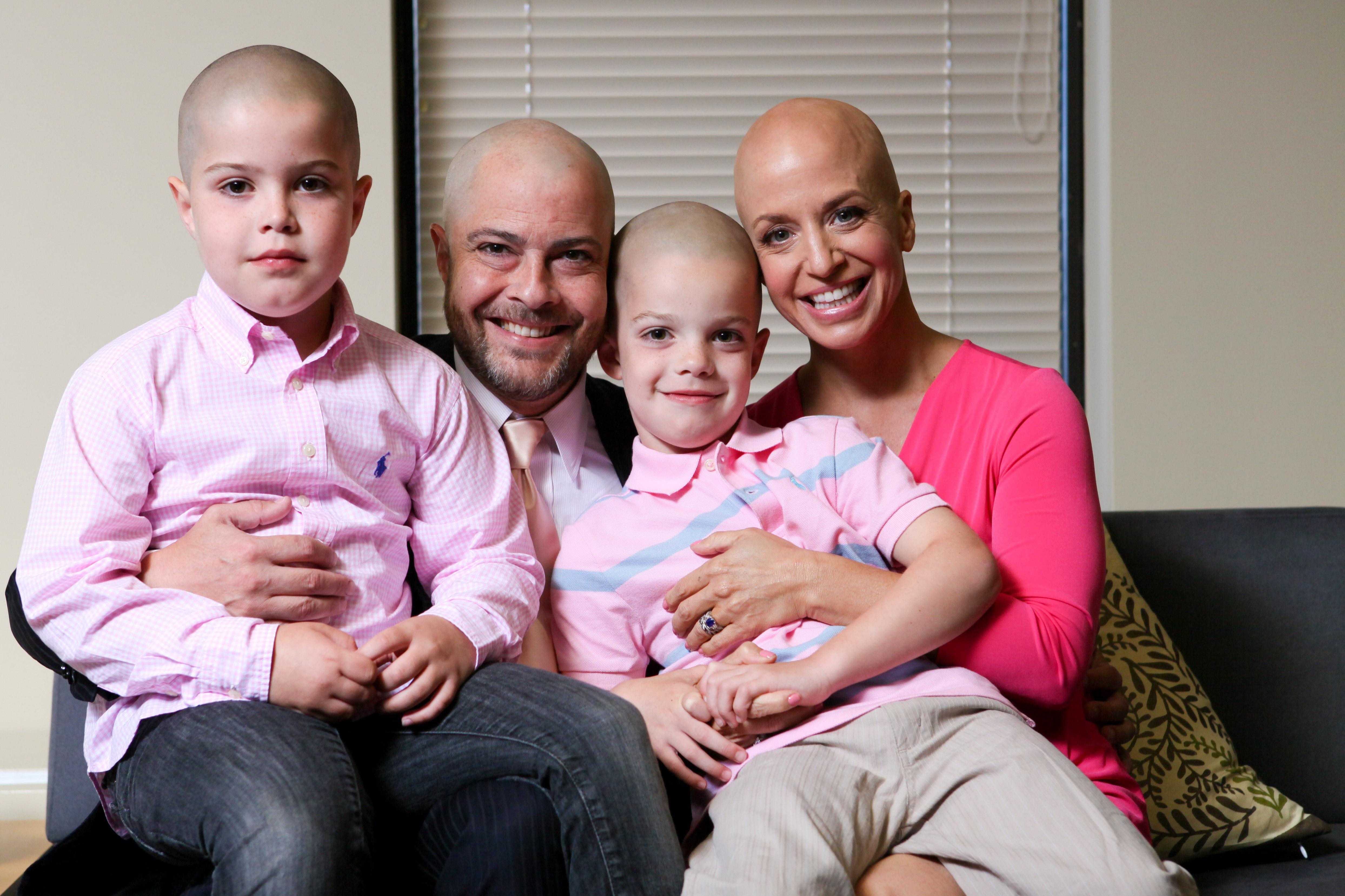 When your family shaved their heads in support—was it a surprise?

They didn’t surprise me. My husband told me he wanted to do it. I went immediately to guilt—"I don’t want you to do that for me." He said he thought it would really help the kids. And then they said they wanted to do it. Then they were all ready to do it before I had gotten ready. At a certain point, you can let your hair fall off, which is a really depressing process of letting it get rapidly thinner. They were ready two weeks before my hair got thin enough that I needed to shave it. They said they would start the bald club and it would all be ready for me to join.

Have they kept their heads bald?

My husband’s keeping his because I think it’s very sexy. I didn’t realize I would feel that way. And our youngest one keeps shaving his.

You also say you feel more “authentically you” without your hair. How so?

I didn’t recognize how much thought and work and energy and attachment I have to my hair. There’s a lot of time spent making sure it looks OK. And I didn’t realize until it was gone how much I connected it with my public persona. It’s who I am, it’s a big piece of what people use to recognize me. Without it, I could almost become someone else. It’s like walking around without clothes. You’re very vulnerable, very exposed. I was not aware how much of a feminine beauty barrier it was. Now it’s just me. No bells and whistles.