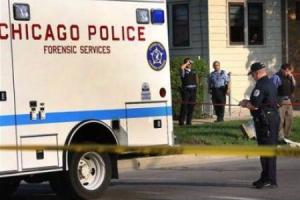 The 3rd police district on Chicago’s South Side has become one of the most dangerous areas in the city. The murder rate in the district is up 91 percent from the same time last year. Police strategy emphasizes the role of the beat officer and community involvement.

On a busy day at the district, Commander Lynette Helm gives the afternoon shift their orders before they head out to their beats. The patrol officer is at the heart of Police Supt. Garry McCarthy's strategy to bring down the level of violence in Chicago. McCarthy moved specialized units and shifted officers out of desk jobs to the street.

The strategy seems to be successful in bringing down some crimes. Criminal sexual assault in the 3rd district is down by 39 percent compared to the same time last year. But the most serious crime of all -- murder -- is up 91 percent.

Residents say they are sick of the violence.

“Multiple gunshots, I mean, like a war zone. Not just a couple of shots, and they are in separate places. It's not just in one block. It’s like four different places where they’re shooting at,” said Altomixe Reid.

The 3rd district runs from 61st Street to 75th Street, and Lake Michigan to the Dan Ryan expressway. It encompasses gritty street corners, vacant land, and boarded-up buildings. But it also has quiet, tree-lined streets. Michelle Obama's childhood home is in the 3rd district. Police say 75 to 80 percent of the murders and shootings here are gang-related.

“One of things that we did early on was conduct a gang audit in all 23 districts in the city. That information is then given to the district commanders, along with the field officers and the front line supervisors,” said Johnson. “One of the things that we focus on is…it’s difficult to stop the first shooting sometimes, but we focus on the subsequent shootings, because sometimes one shooting will result in three, four, five, six additional shootings.”

When Officers Barbara Jenkins and Ameen Mustafa are on patrol, they have all the information from the gang audit at their fingertips. Whenever they stop someone, the officers immediately go to their computer. “The gang audit has been an extremely important tool for the field officers. Before, when I came on the job, we didn’t have portable data terminals to run a name check or anything,” said Commander Helm. “But now, an officer can run a name, put a name in their computer in a portable data terminal, and come up with a gang member’s name and come up with associates or things of that nature that can help them with their crime-fighting.”

The homicide rate slowed slightly in the month of June. But on June 24, a 13-year-old was gunned down in the neighborhood. His was the 21st death since January 1. The 13-year-old's murder is under investigation, with no suspects in custody. All officers in the 3rd district can access information about the case through their computer.

After that killing, and a big spike in the number of shootings, Commander Helm adjusted the crime-fighting strategy.

“What we did was we identified violence zones in our district where we put officers in that area to do these missions,” said Helm. “But we also did more contact with the community. We had the officers doing foot patrol. We did a whole lot of holistic approaches. We got our churches involved, we asked them to open their doors. So those are some of the things that we did a little bit differently.”

There are 175 churches in the 3rd police district, ranging from huge institutions to small storefronts, and many have responded to the crisis of violence. Charles Matthews takes his church’s message to the streets. He tells the kids about several summer programs offered by the church, and urges them to give the programs a try. He became a parent volunteer for the church after getting fed up with the neighborhood violence.

“I got involved because I’m hurting for the community also. I’ve lived in the community for over 20 years,” said Matthews. “I’m just really trying to give back to the community, as far as reaching out and making them aware that these resources are available for the kids, to get the kids off the street into different programs that are available.”

The game room at Parkway Garden Christian church is filled with young kids. The church kept its Safe Haven program running in the summer, even though it lost its funding from the Chicago Public Schools.

It's a second job for 3rd district police officer Jennifer Maddox, who is also the director of the program. Her police work convinced her of the need for programs like these.

“It's frustrating to see the kids out here in the violence, getting shot at and running from the violence and things like that. That’s why it's so important to have some activities for them to do so that they won’t be hanging on the corners,” said Maddox.

Pastor Edward Morris keeps a watchful eye on a group of older boys as they play a hot game of basketball. He says it is these boys who really need the programs his church provides.

“For every kid we can get off the street, every teenager in particular or African-American males, if we can have a place like this during the times of the shootings where they know they got a safe place to come, we feel that we’re putting somewhat of a dent,” said Morris. “While it may appear to be a Band-Aid, if there’s just one life that’s saved, if there’s just one kid who changes his mind on how he wants to exist in this world, we believe we’re making a difference.”

A safe haven is important for kids like 16-year-old Antwan Barner, a program counselor. He says the shooting and the killings have everyone on edge. 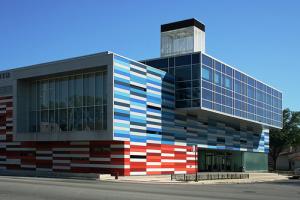 When asked if gangs have ever tried to recruit him, Barner says, “No. The guys I went to school with know that I’m not that type of person, so they never tried.”

There are other strong institutions in the 3rd police district. One of the strongest: the Gary Comer Youth Center and charter school. Opened in 2006, the school and center serve more than 1,200 kids every year. Summer programs for high school students include a gardening class.

The Comer center and school pours $16 million a year into the 3rd district. Executive Director Greg Mooney says it's frustrating to see a 91 percent rise in the murder rate after the enormous efforts made by Comer.

“Of course it’s frustrating. I don’t know anybody who isn’t frustrated by the violence in Chicago,” said Mooney. “But really, without a place like the Gary Comer Youth Center and Gary Comer College Prep, our young people are more vulnerable to the violence that surrounds them.”

And despite the opportunities, Comer College Prep students, like Dominique Jones, are still strongly impacted by the neighborhood violence.

“I’m afraid of dying at a young age, not being able to fulfill my dreams,” said Jones.

Those fighting against the violence in the 3rd district all agree on one point: the effort must involve the entire community.

“The police can’t do this alone. There’s no way we’re going to wrest our way out of this situation,” said Johnson. “So we absolutely need community input to try to make an impact.” 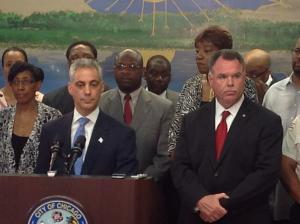 Rev. Morris says the community is ready to respond.

“These are our neighborhoods. It doesn’t belong to the gangbangers, and the drug dealers, and the drug pushers. It belongs to us,” said Morris. “And I believe that with the efforts that so many churches and neighborhood organizations are making, we’re going to take it back. We just can’t stop.”

Next month, the 3rd district will have some added help in stopping the violence. CeaseFire, a national violence prevention organization, will bring 20 violence interrupters to the 3rd district, as part of a $1 million city grant orchestrated by Mayor Rahm Emanuel.