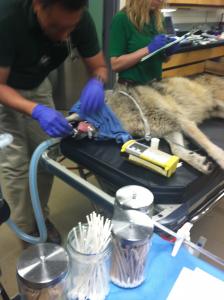 Researchers at Brookfield Zoo began examining and tracking the prevalence of a specific type of nasal cancer in Mexican gray wolves in late April. In addition to creating more understanding about the medical condition, the aim is to boost conservation efforts for the endangered species.

“Well, Filipe is one of our adult male wolves here. He’s the most dominant wolf in our pack. If visitors come to see the wolves at Brookfield Zoo, they’ll probably be able to pick him out,” said Joan Daniels, associate curator of mammals at Brookfield Zoo. “He’s one of the lightest colored wolves, he’s always alert and keeping track of what’s going on in the pack; a very dominant animal with very pretty yellow eyes so he’s easy to pick out.”

While here, each of the wolves will be X-rayed, have their teeth measured, their nails clipped and their coats brushed.

But this year, researchers are also conducting CAT scans on the animals as part of a long-term study that could offer insights into the causes of a specific health issue in this endangered species.

“The CAT scan process that we did today is basically similar to what they do in dogs in which there is suspicion of having nasal tumors,” said Dr. Carlos Sanchez.

The hope is to determine why it is that the Mexican Gray Wolf is exhibiting higher than expected incidences of nasal carcinoma.

In the past 12 years, researchers say at least 14 cases of the cancer have appeared in Mexican gray wolves at zoological institutions in both Mexico and the United States. 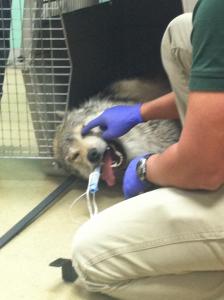 Researchers say that preliminary evidence suggests that the high cancer rates could be genetically linked.

Dr. Sanchez is an associate veterinarian and leader of the study.

“Well, part of the interesting part of this study is that we’re gonna be able to determine if this has a genetic component, and if so, this will have implications in conservation programs, including the reintroduction program in the wild,” said Dr. Sanchez. “Because we don’t know where we’re gonna go with this information. Do we want to breed the animals that have the gene if there is a gene involved? Do we want to release these animals in the wild? We don’t know, but it definitely will have certain implications for the conservation program.”

Mexican gray wolves are the rarest and most genetically distinct subspecies of the North American Gray Wolf and have been listed as endangered for more than 35 years. When they went nearly extinct, the population was increased through the breeding of seven captured animals.

“That is how the reintroduction program started, with seven animals that were the founders that we collected from the wild and put in a breeding captivity. And most of the wolves there are now, they come from these seven animals,” said Dr. Sanchez.

Today, 283 Mexican gray wolves are now living in captivity around the country.

But researchers are beginning to question whether in-breeding in that small population has led to low genetic diversity, which in turn could be partially to blame for the high numbers of nasal cancer in the population today.

“The other part of this study is we are doing not only the wolves here at Brookfield, but we are, the Mexican wolves are federal property so all the animals that have died since 1981 are stored in the museum, Southwestern Biology Museum in New Mexico,” said Dr. Sanchez. “So we’re going to be receiving all the skulls and heads that they have and we’re gonna be scanning them. Approximately 195 heads and skulls that we’re gonna be scanning to determine if there has been any damage on the skull, nasal cavity, brain.” 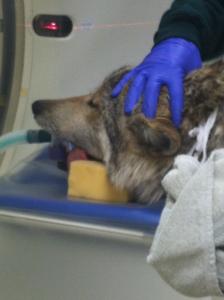 Studying both the skulls of the dead wolves and the current Brookfield Zoo population could help establish the cause of the cancers. It could also provide more insight into the potential pitfalls of captive breeding.

While the preliminary results of the study are not expected to be released until November, Dr. Sanchez says that so far the good news is that no cancers have been found in any of the wolves at Brookfield Zoo.