Sixty years after picking up his first guitar, blues musician Buddy Guy still jams -- and has no plans of stopping. Jeffrey Brown and Guy discuss his upcoming memoir, When I Left Home: My Story, his childhood in rural Louisiana, what his influences were and how his remarkable career helped shape popular music. Watch the PBS Newshour story on Chicago Tonight at 7:00 pm.

Or check out the story in the following video.

Read the transcript of the story from the PBS Newshour:

There he was on a recent night at the White House, Buddy Guy, 75 years young, he puts it, tuxedoed and jamming the blues on his electric fender guitar for President and Mrs. Obama. Seven decades ago, George "Buddy" Guy was a world away, growing up in Lettsworth, Louisiana, his family too poor to purchase a guitar. So he rigged an alternative with window screen wire.

BUDDY GUY, musician: I start screening screen wire for my mom. We didn't have running water, no nothing. Naturally, we didn't have electric lights. So I would steal that and try to pull it tight enough so I could hear it.

And I remember my dad's friends say, Guy, that boy got some fingers. If he get a guitar one day, he will probably be a good one.

JEFFREY BROWN: He got the guitar and became a more-than-good one. Today, he owns the appropriately named Chicago blues club Legends and keeps up a busy performing schedule.

He's told the story of how he got here in a forthcoming memoir titled "When I Left Home."

BUDDY GUY: The first thing I ever learned to play. . .

BUDDY GUY: And guess what? I was out on the woodpile. My sisters had ran me out of the house and told my mom and dad, say, I'm tired of that noise.

JEFFREY BROWN: Guy's story is tied to that of the great Chicago blues tradition. When he came here in 1957, part of the black migration north, he joined a scene that featured the likes of Muddy Waters and Howlin' Wolf, extraordinary musicians and performers creating a new, electrified blues sound.

In those days, the music was everywhere.

BUDDY GUY: If you went walking down 47th Street on a summer night, there was a bar here, there was a bar there. On each side of the street, the doors would open. These local guys, some of them didn't even stay around long enough to get a name. And they was sounding so good, you said, it's -- this must be Wolf.

JEFFREY BROWN: So that was your education, in a way?

BUDDY GUY: Oh, I learned so much from that, trust me.

JEFFREY BROWN: Guy made his name as an incendiary performer. While many musicians at the time sat down to play, Guy stood and put on a show for the crowd.

BUDDY GUY: Well, I'm going to prove myself. Because everybody was sitting down, as I said earlier, I said, I'm going to stand up and somebody is going to pay attention to me.

JEFFREY BROWN: You would prove yourself by getting up on stage and putting on a real show?

BUDDY GUY: Putting on a show, yes. I used to lay all down, kick it with my feet, and lay flat on my back and put it under me and my back and still could hit a few licks.

JEFFREY BROWN: He had some success, and recorded for Chess Records, the legendary recording company in Chicago. But that was both a blessing and a curse.

You write in the book about coming to Chess Records, a sort of incredible home for the blues, but also a system that didn't work for the musicians in many ways.

BUDDY GUY: When I first went in there, they would just put my name on a record. And they will say, well, I made you. Even the disc jockeys are saying, if I play your record, I made you. You got to play for me free.

And I did that a lot. And, finally I said, I can't eat that, you know, and I was, like, really hungry.

JEFFREY BROWN: You felt like people were taking advantage of you.

BUDDY GUY: Well, they was.

JEFFREY BROWN: It was in the 1960s that blues became an international phenomenon, as white rock 'n' rollers, many from England, took up and popularized the music.

Here you are with Eric Clapton, David Bowie.

JEFFREY BROWN: Your world at that point sort of opened up to start playing with all kinds of, well, rock 'n' roll musicians, huh?

JEFFREY BROWN: The rock stars borrowed the style. Many publicly acknowledged the influence of Buddy Guy and others, and made lots more money. But Guy says it was a win-win.

BUDDY GUY: Somebody gets out there, they would make more money in one night than I do in 10 years. They did me a favor. They did all of us a favor. The Rolling Stones, the Eric Claptons, and people like that help Ike and Tina Turner, B.B. King and myself.

They came back in and told the white audience who we were, because a lot of white people weren't listening to no blues 50 years ago.

JEFFREY BROWN: These days, Guy is focused on keeping that tradition alive, and that's where the club comes in. When not on the road performing, Guy can be found there signing autographs and sometimes jumping on stage.

People everywhere, he says, can connect with the blues. There's pain there, sure, but also so much more.

And I remember once I was checking into a hotel in New York, just getting to go to New York, and the receptionist looked at me and said, oh, blues is sad. And it was a husband and wife, and I gave them a ticket to my concert. And they come out the next morning and say, it's not sad.

JEFFREY BROWN: What is it?

BUDDY GUY: It's a part of life. If you pay attention to what some of the great writers write about, it's -- how can you say B.B. King's record "I got a sweet little angel, I love the way she spreads her wings," how could that be sad?

JEFFREY BROWN: Well, what about you? You just going to keep going?

JEFFREY BROWN: You say that with a smile on your face.

BUDDY GUY: Well, I love what I'm doing. And, you know, the world is so mad now at everybody. If I do something to make people smile, I'm going to say, I got you. For that moment, if it don't last, I made you forget about the other thing you might have been thinking about.

JEFFREY BROWN: All right, Buddy Guy, nice to talk to you. Thanks for talking to us.

BUDDY GUY: Thank you so much. Any time. 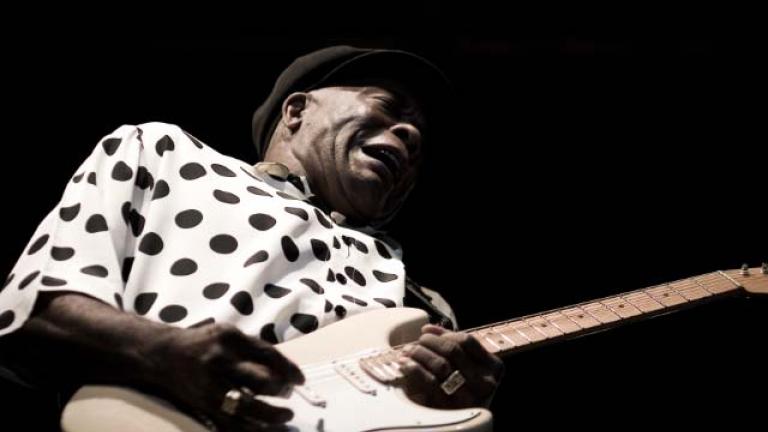