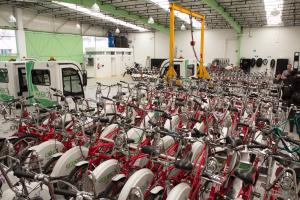 Part three of our series on sustainable transportation takes us to the bike paths of Mexico City. The bike sharing program there offers some insights into what a similar program could look like here in Chicago. Ash-har Quraishi and Eddie Arruza visited Mexico City in March as part of a transit study tour funded by the Rockefeller Foundation and organized by the New York-based nonprofit, Institute for Transportation and Development Policy.

A bustling metropolis of around 22 million people, Mexico City poses a unique challenge for commuting.

That's why transportation officials are always looking for innovative ways to ease congestion both for daily commuters, as well as those just trying to get around town.

The city already boasts extensive public bus and train routes, and even a Bus Rapid Transit system that is extremely well used.

And just as Chicago is about to do, Mexico City established a bike sharing program just over two years ago, called Ecobici.

“The idea is to provide the citizens a means of transportation that increases inter-modality and that takes people out of the cars,” said Ecobici official Oscar Montiel.

Eddie and Ash-har recently had an opportunity to experience Mexico City's Ecobici firsthand. But, as they quickly found out, riding a bike alongside speeding buses and unpredictable traffic circles feels like a death wish; a perception that was an early obstacle for Ecobici administrators.

“Well, the main problem has been reception in a car-centered city, as Mexico City has been for years,” said Montiel. “People perceive the bicycle as an unsafe means of transportation, so changing that perception has been a real challenge for making people switch from another car or a taxi, or whatever, to the bicycle.”

Part of that reassurance came in the form of dedicated bike lanes with a physical barrier to protect bikers from both drivers on the road and pedestrians on the sidewalks.

Here in Chicago, there are also protected bike lanes: two miles to be exact, with the promise of about 100 more miles over the next four years. 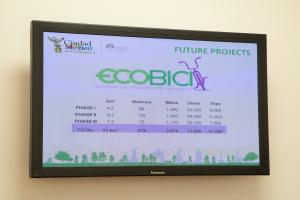 Ethan Spotts is the Director of Marketing & Communications at Active Transportation Alliance, a nonprofit advocacy organization that works to improve safety conditions for bicycling and walking.

“Protected bikeways are great because anyone from 8 to 80 years old should be able to ride around, and these protected bike facilities allow more people to go out and try it,” said Spotts. “So, we’re anticipating a huge explosion, and a hundred miles of protected bike lanes is going to far surpass any other city in the United States.”

But while the comfort of protected bike lanes in Mexico City encouraged some to get on their bikes, administrators feared other safety requirements could actually be a deterrent.

Officials with the city’s bike share program say it took a lot of education and incentives to get people to start riding their bikes here in the city. One of the incentives was to do away with a mandatory helmet law that was repealed just days before the program was launched.

Since there is no helmet law in Chicago, bike share participants won’t be required to wear helmets either, although it’s strongly recommended.

And the city is aiming to make the program as accessible as possible. The goal is to have 300 stations set up with a total of 3,000 bicycles available in Chicago by summer’s end. 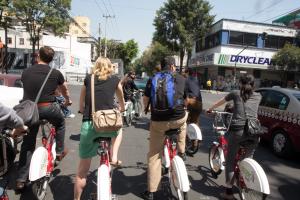 “We see the biggest benefit is that not only are people in other cities using the program, but they’re using the program to replace car trips,” said Amanda Woodall, Policy Manager at Active Transportation Alliance. “So, for instance, in Minneapolis, 23 percent of the trips that they have for bike share have been replacing car trips; and that number is up to 43 percent in Denver, Colorado.”

Ecobici says the secret to success, which now has 37,000 subscribers who make 9,000 daily trips, is a simple recipe that can be followed in major cities like Chicago.

Unlike Mexico City's bike share program, which is operated by Clear Channel and only allows for monthly or annual memberships, Chicago’s program will allow for one-day memberships as well. 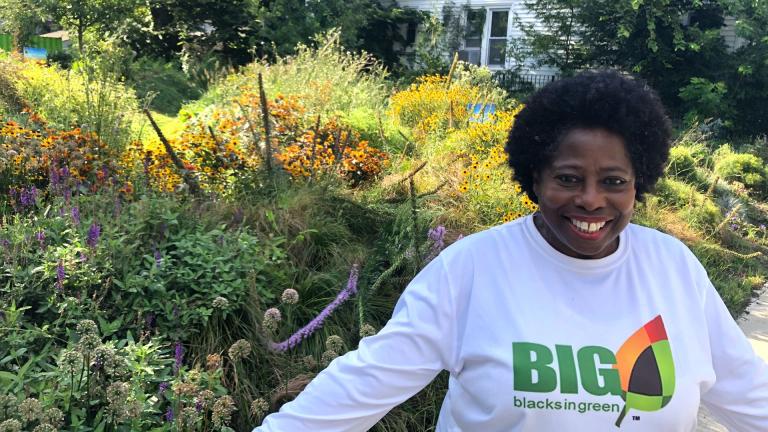