The Flag and Seal Revisited 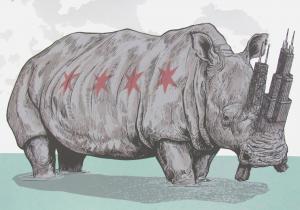 A Chicago dentist designed the city seal, and a local author created the design for the Chicago flag. Now, at the city's invitation, a group of artists have re-thought these symbols of our town.

In honor of the city's 175th anniversary, The Flag and Seal Revisited features artwork that reinterprets these icons.

"We wanted to explore Chicago's history, and the flag and the seal are a big part of that," curator Nathan Mason said. "And they're both wonderful works of graphic art."

The effort is part of a larger exhibition at Expo 72 that celebrates the city's lively printmaking community, which dates back to the 19th century. This showing, however, focuses on the greatest hits of contemporary artists.

"All the prints here were made within the last few years, and some of them are just purely for the art-making--artists sitting down and doing art prints," said Mason. "Others are from the big community of Chicago printmakers who do rock posters, like Steve Walters and Jay Ryan."

"It's the whole run of different media. So it's lithography, serigraphy, which is silkscreen, there's woodcut, and engraving, and there's even printmaking on ceramics," Mason said.

View a gallery of some of the works featured in The Flag and Seal Revisited.

The exhibit also includes a history of the city's flag and seal, by the City of Chicago's cultural historian, Tim Samuelson. Read an excerpt below:

In creating the design for Chicago’s flag, local author Wallace Rice was obviously a person who paid attention to details.  Officially adopted in 1917, the flag’s straightforward design is deceptive in its simplicity.  Every detail was placed with symbolic meaning.

WHITE STRIPES:  From top to bottom, Chicago’s North Side, West Side and South Side are each represented by a white stripe.

RED STARS:  Wallace Rice’s original 1917 flag design had only  two stars representing important events in Chicago’s history: one for the Great Chicago Fire of 1871, and the other for the 1893 World’s Columbian Exposition.  The flag was created to allow additional stars as needed.  A third star was added in 1933 in honor of the Century of Progress Exposition, and a fourth star was added in 1939 as tribute to Fort Dearborn.  Even the points of each star have symbolic meaning, and  represent aspects of civic virtue, local pride and history.

Largely forgotten, however, is the fact that designer Wallace Rice intended the flag to have an entirely different symbolism when displayed in a national context.  The center white stripe with red stars becomes symbolic of Chicago’s central location, the blue stripes represent the eastern and western mountain ranges, and the top and bottom white stripes signify the Atlantic and Pacific coasts.

Creation of the flag was the result of a design competition that was open to the public.  Wallace Rice was initially engaged to write the rules for the competition, but subsequently decided to enter his own design—and ultimately won.

Creation of an official city seal was one of Chicago’s first legislative acts upon becoming a city in 1837.  It was a necessary symbol to affirm the authenticity and authority of all legislation and documents authorized by the local government.

The original design approved by the City Council in 1837 is lost, but its imagery was clearly specified and incorporated in subsequent artistic renderings for official use:

After several modifications and revisions, the present-day composition of Chicago’s official seal was adopted in 1905.  It was designed by Chicago dentist Bernard J. Cigrand, whose personal interests included the study of historical heraldry and symbolism.

A small controversy was generated when Dr. Cigrand submitted a bill for $547 as compensation for creating the revised design.  Although the City Auditor complained the requested fee was “at least several times what a well designed and engraved seal should cost,” Dr. Cigrand’s design has been the City of Chicago’s official symbol for over a century. 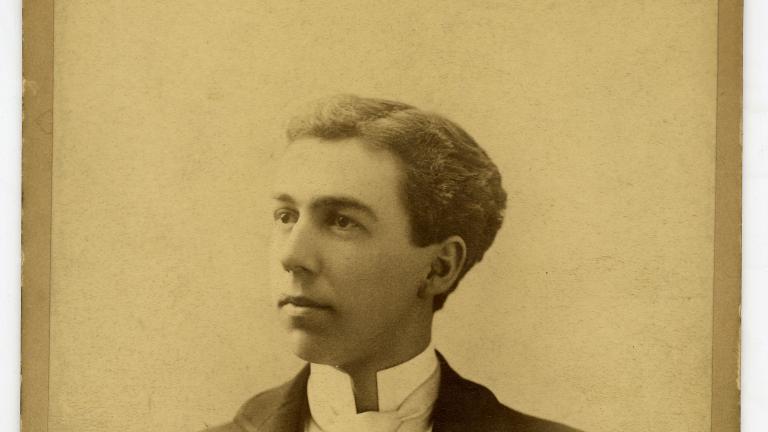