Facebook would be the third most populous nation, behind China and India, if the social network was a country. But with the boom in social networking and the ubiquity of Facebook comes another concern: privacy.

On Chicago Tonight at 7:00 pm, Lori Andrews, a law professor and director of the Institute for Science, Law and Technology at the Illinois Institute of Technology, will discuss her new book: I Know Who You Are and I Saw What You Did. 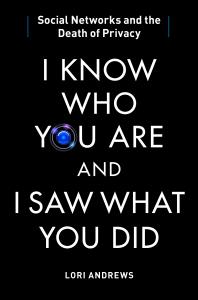 Unlike in a democracy, Facebook is unilaterally redefining the social contract—making the private now public and making the public now private. Private information about people is readily available to third parties. At the same time, public institutions, such as the police, use social networks to privately undertake activities that previously would have been subject to public oversight. Even though cops can’t enter a home without a warrant, they scrutinize Facebook photos of parties held at high school students’ homes. If they see the infamous red plastic cups suggesting that kids are drinking, they prosecute the parents for furnishing alcohol to minors.

You might think you are posting information just to family members, but with a modest change in computer code, the privately run Facebook can send that information anywhere. Both inadvertently and through conscious decisions, Facebook and other social networks have put private information, including medical test re- sults, credit card numbers, and sensitive photos into the wrong hands.
Unlike Vegas, what happens in Facebook doesn’t stay in Facebook.

The precursors to social networks were multiplayer online games, where people interacted through avatars they’d created that often bore no resemblance to the real person they represented. But what you do in today’s social networks doesn’t involve playing a role. And the implications are much greater than winning and losing loot, treasures, and experience points.

Unlike games and previous social networks, Facebook asks the user to submit his or her real name and email address. And the actions taken on Facebook and other social networks have real world consequences. Women have been fired because their Facebook posts showed them wearing provocative clothing. Straight-A students have been expelled from school for criticizing their teachers on Myspace. When, the day before a criminal trial, a cop posted on Myspace that his mood was “devious,” a parolee charged with gun possession used that post to persuade a jury that the cop had planted a gun on him.24

Colleges and companies routinely search Facebook and Myspace to determine whether to admit or to hire people. A background-checking service called Social Intelligence Corp. accumulates files on the Facebook photos and posts of any user with privacy settings marked “Everyone.”25 The company keeps each person’s file for seven years—so even if you delete that photo of you in your “Free Charlie Manson” shirt, you’re still going to have a hard time getting a job.

Artists have demonstrated how information posted on Facebook can be used out of context. Italian artists Paolo Cirio and Alessandro Ludovico created Lovely Faces.com, a fake dating website using information from publicly available Face- book profiles.26 They used software to copy people’s names, pictures, and locations from over a million Facebook profiles.27 Their software extracted 250,000 faces, and the artists used a facial recognition algorithm assessing features and expressions to classify the photos into six categories—social climber, easygoing, funny, mild, sly, and smug.28  Paolo and Alessandro discussed the impetus behind their project when it appeared at a Berlin art festival: “Being judged is the price everyone must pay to be involved in social networks. The project sneers at the trust that is brought to the platform by 500 million users, reminding them that there are—just as in the ‘real’ world—consequences to publishing intimate, personal information on social networks.”29

Our digital identities on the Web—email, personal websites, and social media pages—are starting to overshadow our physical identities. As we work and chat and date (and sometimes even have sex) over the Web, we are creating a digital profile of ourselves that redefines us—and could come back to haunt us.

Are you concerned about your privacy online? Post your comments below or sound off on our discussion board!