Riverwoods antiques dealer Richard Harris has an unusual collection: over 1,000 pieces of art and artifacts of the morbid and macabre.

From high-end Goya prints to decades-old photographs he’s picked up for $5, much of his collection is now on display at the Chicago Cultural Center’s Morbid Curiosity. Harris joins us on Chicago Tonight at 7:00 pm.

Harris, who sold antique prints to interior designers before he retired, started the collection after he saw a “momento mori” at an art fair in the Netherlands—a grouping of small images on death and dying literally meaning, “Remember you will die.”

“There were photographs, ivory cravings, and I thought, ‘That’s a wonderful topic for collecting,’” Harris said. “It’s different enough.”

This is Harris’ third major collection. Traveling across Europe, he became hooked on collecting. When he started in the 1970s, it was inadvertent.

“I occasionally came across some wonderful natural history books from the 17th through 19th centuries, and I would buy them and put them away,” Harris said.

After 35 years, Harris had amassed hundreds of books, many of historical importance.

Harris sold that collection, and another of nearly 100 Rembrandt, Picasso, and Matisse prints, at auction.

“After that, I really wanted to test my own eye,” Harris said.

For the morbid collection, “I wanted to have a broad overview of the icons of death. I bought inexpensive pieces of art, vernacular photographs that have been done in the past 50 years, almost anything that has the skull and skeleton as the object. The thrust of this collection was the breadth and depth of the iconography,” he said.

The exhibit is largely split in two: The War Room and the Kunstkammer of Death. The War Room features five series of prints about war, from the Thirty Years War to the Iraq War.

The Kunstkammer, or cabinet of curiosities, includes more than half of Harris' overall collection, everything from a diamond-encrusted skull to 16th century paintings of decaying bodies. One of the few things left out of the show is his collection of rock-and-roll t-shirts emblazoned with skulls.

Harris shared his thoughts on some of the exhibits’ most striking pieces: 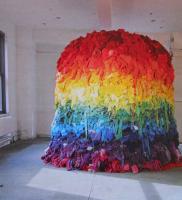 Tribute by Guerra de la Paz: This doesn't have skulls in the work itself, and at the outset of my collecting, it was the only one that didn't. But the power of this piece, which relates to the Holocaust, was very meaningful to me, especially because I'm Jewish. In the concentration camps, the Jews were depersonalized, their clothing was taken away from them, their shoes were taken away from them, their glasses. And you see photographs of these piles of shoes, glasses, and clothing. This struck a vibrant chord in my soul--it was something I needed to have. None of these clothes were dyed, manufactured or changed, and there's nothing but clothes supporting it. It was built one piece at a time.

The Living Shell by Pavel Tchelitchew: His technique is extraordinary. He's not a medical illustrator, but this is his interpretation of the journey towards the human soul and mind. Another of his pieces are some abstracted heads that are just concentric circles. I can't imagine how he was able to create such pure lines and circles without a compass.

Untitled (family portrait: woman in yellow dress) by Marcos Raya: I saw an example of Marcos' work and commissioned this series of five family portraits. All I told him was, "Do something with a skull." He found these old photographs and he drew around them to create a death portrait. It's like the Addams family, or your own family. It's the idea that we all die, and we will become bones, we will become skulls, we will become skeletons. It's a vision of what we would be with our clothing on, living our normal lives, but as skeletons.

In the Eyes of Others by Jodie Carey: Only one could fit in the Cultural Center, but there are actually three chandeliers, made up of 3,000 hand-crafted plaster bones, based on five real types of bones. When I first saw them, she offered them to me as a set of three, and I said I couldn’t do it—physically. I asked to buy just one, but she said no. Eventually, she called and said she'd break the set for me, but by that time, I was completely fascinated by the three, and I wanted three after all. She didn’t want them hung high like chandeliers, because then you can’t appreciate that they’re bones. It is hung very low to the ground, so you can see each bone attached to an armature. It is an engineering feat on the part of the Cultural Center to hang. As with "Tribute," it’s not something you say, "I want to exhibit this." It requires the artist to come on site every time to reconstruct this. 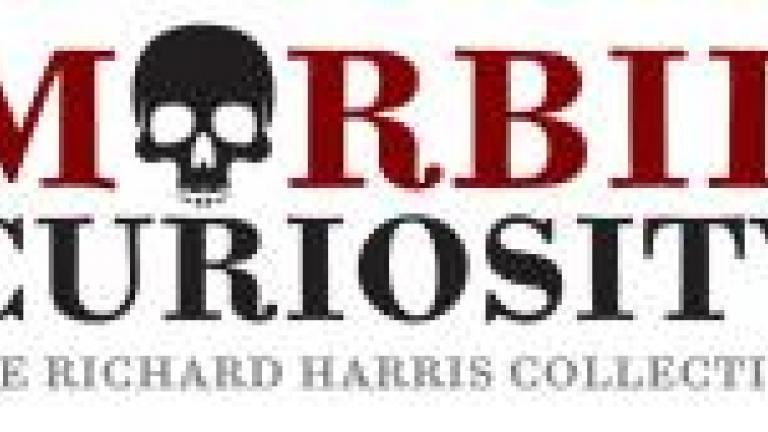