The legend of Harry Houdini gets turned upside-down when two local theater companies explore the magic behind the peerless entertainer. Chicago Tonight  takes you behind the scenes of House Theatre's Death and Harry Houdini and Chicago Children's Theater's The Houdini Box tonight at 7:00 pm. 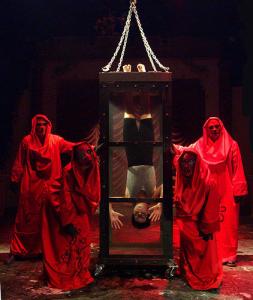 This is the third time you’ve put on Death—it was the company’s first production ever in 2001, and then you put it on again in 2003. What’s different this time around?

We all rallied around our first production, Death and Harry Houdini, which was a good first step for our little company. I was part of the House from its inception and therefore part of that first production. It was really exciting, imaginative physical theater that had no pretense of realism, no fourth wall. It was just hugely imaginative, a lot of spectacle, a lot of unique elements to it.

When we were young in 2001 and created the show, we were creating a show that was an experiment. Now, not only have we gotten better, we’ve gotten smarter about the story we’re dealing with. The scope and depth of the play has grown as the artists have grown over the past 10 years. Not only is there more spectacle and magic, the magic is more effectively used to tell the story—there’s not superfluous spectacle throughout the play. From the lines to magic to music, it’s all integral.

One of the play’s signature moments is a recreation of Houdini’s famous water torture cell escape, where he was chained, suspended from his feet, and dropped upside down in a tank of water. How do you prepare for an escape like that?

I grew up in a family of magicians, but most of them were sleight of hand artists, so I had never done this kind of escape. But knowing we were going to add the escape in the 2003 show, the company invested in the equipment very early on, so we had it for about six months before we opened. It required getting into much better physical shape. I had to get the stamina to hold my breath for three minutes, which required me to quit smoking and do a lot of things that are much better for my life, like losing a lot of weight.

At first, I practiced the escape without water, then slowly adding a little bit of water each time to adjust to the difference. This time we have a different cell than 2003—this one is extremely small by comparison, there’s hardly any room to maneuver, and it makes the escape much more difficult.

What kind of magic was your family involved in?

My granddad was a sleight of hand magician and ran a magic ship in Dallas, and I learned magic from him. My uncle did it professionally as well. My granddad really loved magic. In addition to running the magic shop, he was such a kid about magic—he was fascinated by magic and really enjoyed doing it. It just rubbed off on me. Whereas there are a lot of kids that love the repetition and drilling of football, I loved the work it took to do magic and enjoyed the discipline. I kept doing it all through college when I started studying theater and decided I wanted to make theater and use magic as a storytelling tool. 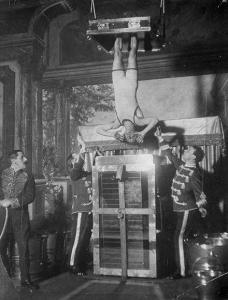 I’ve heard your grandfather once met Houdini. Is that true?

He was a kid at the time, but it made a lasting impression. It’s not something I knew until after he passed, so unfortunately I never got to ask him about it—my grandmother mentioned it to me a couple of years ago. I knew he had some older Houdini photographs of the Hudson River packing box escape. They were very special to my grandfather and my grandmother told me he held on to them for so many years because of the impression Houdini made when he was a little, little kid. So I don’t know the details, unfortunately. For years, she kept them in her sock drawer of all places. Now, obviously, they’re no longer in the sock drawer.

You use a lot of sleight of hand in your other show, The Magic Parlor. What are the similarities between that kind of close-up magic and the sort of grand spectacles in Death and Harry Houdini?

There’s a lot. There’s a different kind of stagecraft naturally—the equipment and technologies in pulling off making a person disappear and a card disappear are different. But there are larger principles that are very much the same: engaging the audience’s imagination, using misdirection, controlling the audience’s attention, and understanding where they’re going to put their eyes. My grandfather used to tell me the job is not to fool people, though you have to do that, but to spark their imagination and make them feel like a kid for a few minutes.

The goal is to ignite their sense of wonder, and the psychology of the two styles of magic are very much the same. It’s less about the boxes you’re putting people in or the lights, which is how we’re able to get away with the torture cell, and more old-fashioned stagecraft and telling a great story.

A behind the scenes look at how Watkins prepared for the water torture cell escape:

For more on the shows, please visit the links below.