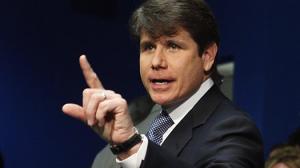 Rod Blagojevich was sentenced to 14 years in prison and ordered to pay a $20,000 fine. The former Illinois governor was sentenced to 168 months in prison by Judge James Zagel on Wednesday, after being convicted this summer of 17 counts of corruption, including trying to sell now-President Barack Obama's Senate seat.

Blagojevich was ordered to surrender to the U.S. Bureau of Prisons on Feb. 16, 2012 to begin serving his sentence. The prison term is the longest ever imposed on a former governor in the Northern District of Illinois.

“When it is the governor who goes bad, the fabric of Illinois is torn, disfigured and not easily repaired,” said Zagel. “The harm here is not measured in the value of money or property...the harm is the erosion of public trust in government."

We have all the details from the courtroom, as well as analysis from Blagojevich's own defense team, a former federal judge and others about the punishment on Chicago Tonight at 7:00 pm.

Several officials have released statements about the Blagojevich sentencing. Read a few of them below.

“Blagojevich betrayed the trust and faith that Illinois voters placed in him, feeding great public frustration, cynicism and disengagement among citizens. People have the right to expect that their elected leaders will honor the oath they swear to, and this sentence shows that the justice system will stand up to protect their expectations."

Robert D. Grant, Special Agent-in-Charge of the Chicago Office of the Federal Bureau of Investigation

“The sentence handed down today represents a repayment of the debt that Blagojevich owes to the people of Illinois. While promising an open and honest administration, in reality, the former governor oversaw a comprehensive assault on the public’s trust."

“Judge Zagel's sentence is a clear warning to all elected officials that public corruption of any form will not be tolerated.”

"We cannot rely on a prison sentence to deter corruption. Illinois needs stronger ethics laws to kill pay-to-play politics. It's time we expose conflicts of interest before they cost taxpayers, and clear the way for true public servants to rebuild trust with the public. Increased transparency, coupled with the threat of serious prison time, can end these shameful courtroom battles. Together we can put this chapter behind us, restore integrity to government and live up to our legacy as the Land of Lincoln.”

"Based on his convictions - for numerous crimes he was caught on tape committing during just one six-week period -  Blagojevich deserves a lengthy prison sentence. Unfortunately, though, it cannot fix the damage he inflicted on our state over his six years as governor. Blagojevich became governor by promising ethical reform, but from the start, he relentlessly used his position to pursue illegal and morally bankrupt schemes motivated by power and greed. His conduct was disgraceful, and the cost to the state has been devastating. Blagojevich refused to govern responsibly and, instead, put Illinois up for sale. He tarnished the state’s reputation nationally and internationally, and he destroyed the public’s trust in government. May today’s sentence put an end to corruption in the Illinois’ governor’s office."

"I take no joy in seeing any father taken from his children and family for an extended period of time. And yet there is no question in my mind that it is the right decision given the extraordinary damage Blagojevich caused our state, and the importance of sending a clear and unmistakable message that corruption will not be tolerated in our government."

"Rod Blagojevich has never understood the fundamental difference between serving the public and serving his own personal interests; Ultimately, the people of Illinois have suffered the consequences.  Although Blagojevich's punishment will not restore statewide, much less nationwide certainty in Illinois, some justice has been served to our State today.  We must now move past this humiliating time in history and turn our focus toward working together to rebuild Illinois."

"Today's sentence ends the Rod Blagojevich saga, but unfortunately his enablers continue to burden the people of Illinois with financial mismanagement and higher taxes that have caused the downward spiral of the Illinois economy, and also widespread distrust of our public officials."

"He put a price tag on state jobs, state actions and state contracts. He had to get paid before anything could happen. The damage he did was more severe than anything George Ryan did."

“Today, justice has been done. The deliberate acts of bribery, extortion and fraud that ultimately led to this day warrant a punishment tantamount to the serious nature of Blagojevich’s crimes. Let this day be a firm warning to those in public service – we will not rest until integrity and accountability serve as the rule, not the exception, in state government.

“With this verdict we all must reaffirm our commitment to ridding Illinois of leaders that allow personal ambition to trump the public good. I remain devoted to eliminating pay-to-play politics and a culture of corruption that has permeated Illinois politics.

“Rod Blagojevich brought the 14 year sentence on himself.  He deceived the people of Illinois far too long for what the jury substantiated as his own personal gain.  Today’s sentencing is proof that such corrupt, embarrassing behavior will no longer be tolerated in Illinois.”

What are your thoughts on Blagojevich being sentenced to 14 years in prison? Post your comments below or sound off on our discussion board!

US Attorneys Office on Blagojevich Sentencing.pdf