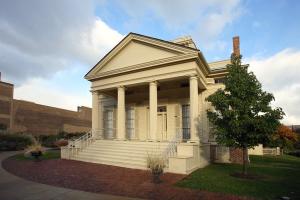 Amid the brand new construction in the South Loop lies an old house. Really old. As in, the city's oldest.

The Clarke House was built in 1836 by Henry Brown Clarke and Caroline Palmer Clarke, a merchant couple from upstate New York.

The Clarkes built the house in 1836 on 20 acres of real estate near the lake because they wanted to be far away from the hustle and bustle of the city.

“Their closest neighbor was at Madison Street, so they were kind of off here by themselves in the middle of nowhere as a country estate,” said Becky LaBarre of the Clarke House Museum.

This was before Chicago became the epicenter of architecture. The Clarkes lamented the city's buildings were architectural insubstantial.

The Clarkes decided to build their house in a Greek Revival style.

“Americans were taking inspiration from ancient Greek architecture and they like to compare ancient Greece to their society,” said LaBarre. “They went through so much trouble to make it symmetrical. There's actually a false window on one side so that it would echo the facade around the other side.”

To get a sense of life in the mid-19th century, we unlocked the front door and walked in.

How about this for a real estate listing: Fully furnished with real Victorian furniture, carpets, China, and silverware. Caution: the food is not real. A fortepiano, which is the immediate predecessor to the modern day piano, floor to ceiling windows, a mini chair…

“This seat is made for a lady. During the 1850’s, we were in the era of very wide skirts,” said LaBarre. “The cage crinoline had just been invented in 1856, so this allows a lady to sit without compromising her modesty.”

The second floor housed eight bed and boarding rooms. And on the third floor, there’s a cupola with spectacular views. Of course, they must have looked much different than they look today.

In October of 1871, the view was all orange. But the great Chicago Fire never reached far enough south.

The house may have survived, but it wasn't long for that neighborhood.

Another family, known as the Crimes, purchased the house and decided to move it south. But why not just buy a new house in the location they wanted?

“The Clarke House had already become sort of a landmark during the time period that the Clarkes were living here, and at that time, there was a lot of coal and dust, so the Crimes family wanted to take their kids to where the air was pure,” said LaBarre.

It wouldn't be the last move or owner for the house. It became the center of St. Paul Church of God in Christ. The church was presided over by Bishop Henry Lewis Ford who is the namesake for the Bishop Ford Freeway.

In the 1970s, the city bought the house and decided it was time to move it back to the old neighborhood. Unfortunately, there was something standing in the way that hadn't been there before. City crews discovered it was too big to fit under the elevated train line.

“They had to lift it with hydraulic jacks up and over the el tracks,” said LaBarre. “Traffic was pretty slow on the night of December 18, 1977, so at exactly one minute after midnight, they were able to lift Clarke House up and over, and it had crossed the el tracks. Unfortunately, the weather was so cold, the hydraulic lifts froze and the Clarke House was left suspended on the jacks for two weeks until they thawed.” 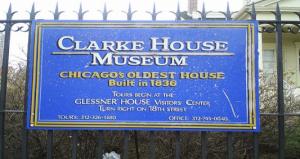 The house is presently nestled in the middle of Chicago Women's Park and Gardens, having survived fires, relocations, and now the changing face of the neighborhood. It’s open for visitors, ensuring a glimpse into Chicago's past for years to come.

While the city touts the Clarke House as Chicago's oldest, it is not the oldest house within Chicago.

A wing of the Noble-Seymour-Crippen house located in Norwood Park on the Northwest Side was built in 1833. However, that area was not a part of the City of Chicago until 1874.

The Clarke House celebrates its 175th anniversary all month, including events this Wednesday and Saturday. For more information, please visit the links below.