The Art of Gaman

We take a look at unusual art and artifacts made during World War II. Find out the incredible story behind The Art of Gaman on Chicago Tonight at 7:00 pm.

When Japanese-Americans were rounded up and shipped to internment camps in the U.S. during World War II, some of them created art and handiwork to help them cope. Paintings, carvings and sculptures are part of The Art of Gaman exhibition at the Illinois Holocaust Museum in Skokie, which opens on Sunday.

Phil Ponce will speak with curator Delphine Hirasuna about her own family’s experiences and the meaning of gaman: which is to accept something unbearable -- with dignity.

View some of the artwork in the image gallery below.

The father of sculptor Ruth Asawa, Umakichi Asawa was among the hundreds of Issei (immigrant generation) men who were rounded up after the bombing of Pearl Harbor and sent to camps run by the Justice Department. There they were held without being charged with a crime and without right of personal attorney. Asawa probably made the list because he was a community leader, Japanese language teacher, and a highly successful farmer. Ruth remembers that he was arrested on April 1, 1942, which was his birthday as well as his wife’s. The family didn’t know where he was taken for months. Finally, they received a letter from him. He was allowed to join his family at the Rohwer, Arkansas camp a year later. By then Ruth had received permission to leave the camp to attend a teacher’s college in Wisconsin. While there she received a carved box (lid shown here) from him, inscribed on the back: “For Ruth Asawa from Daddy.” 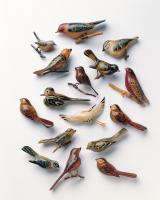 Wood carving of little birds was a prevalent art form in all of the camps. A set of Audubon bird identification cards and an old National Geographic issue that featured birds were sources of research and inspiration for many carvers. To create the bird, artists sketched a bird outline on flat wood, carved and sanded it into a three-dimensional form, then painted it with realistic colors. The biggest challenge was the bird’s legs and feet, which had to look spindly, yet be sturdy enough to hang onto a “limb.” Many artists solved the problem by snipping the surplus off wire-mesh screens that had been slapped over barrack windows. The wire proved to be just the right thickness and strength to resemble bird legs. The final touch was to glue a safety pin onto the back of the carving so it could be worn as a brooch.

One of the three thousand Japanese immigrants arrested by the FBI in a mass roundup of so-called “enemy aliens,” Kawamoto was imprisoned at the detention camp in Santa Fe, which operated under the provisions of the Geneva Conventions. 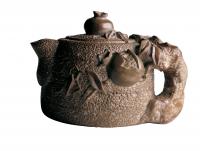 While imprisoned at Topaz, Iseyama carved a number of exquisite teapots, teacups, candy dishes, and calligraphy inkwells out of the slate stones found in the area. After first chipping out a rough form in the rock slab, he carved, sanded and polished the shape and design. A self-taught artist, Iseyama attended Waseda University in Tokyo before coming to America in 1914 with the hope of attending art school. He was forced instead to seek full-time employment as a gardener to survive. At Topaz, in addition to making slate carvings, he demonstrated his artistic range through watercolor paintings and tanka poems. A landscape gardener in Oakland, California, before and after the war, Iseyama was also a widely respected bonsai master. While in Topaz, he continued to hone his skill by sketching ideas that he copiously annotated with notes. 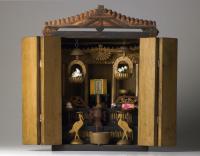 Kawase was a poultry farmer from Petaluma, California. He died in camp three weeks before his family was released on August 21, 1945. 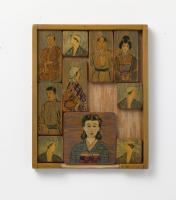 Assigned to tend the boiler while interned at Minidoka, Matsumoto amused himself by whittling and carving things for his children. Using scrap wood, he carved this puzzle and hand-painted the blocks. The object of the game was to move the blocks without lifting them so that the fair maiden could escape the protective attention of her parents and servants and let herself be surrounded by the four eager suitors.

Carving was a popular way to pass the time for most men in camp. All it required was a pocketknife and whatever bit of wood one could find. In Topaz, Hoshiyama carved a set of Scottie dogs, the smallest of which is just one-half inch high.

The story goes that one day an elderly Japanese man walked into the Eastern California Museum near Manzanar and gifted them this toy train that he made in camp, along with two boats that he made there as well. Assembled from scraps of metal, the train was actually designed to roll along the tracks that Kurushima built as well.

Tar-paper-covered barracks that stood in the shadow of the limestone-capped Heart Mountain in northern Wyoming are depicted in bas relief by an unknown artist. 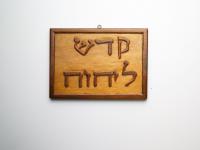 The Okimoto family was first evacuated to an assembly center at the Santa Anita Racetrack, where Rev. Okimoto drew this map of the camp layout on the back of a plaque he had carved with the Hebrew saying “kadosh Adonai,” roughly translated as “holy to God.” He may have learned Hebrew at the Oriental Missionary Society Bible College in Tokyo, where he graduated in 1933, or he may have been self-taught. It had always been Rev. Okimoto’s dream to someday visit Israel. Rev. Okimoto was pastor at the San Diego Holiness Church from 1937-42. After the war, he was transferred to the San Lorenzo Holiness Church, where he served from 1947-54. From 1954-64 he served the San Fernando Church. He always hung the plaque over his desk.