A new study by local scientists sheds light on the efficacy of the Pfizer and Moderna vaccines as well as the importance of receiving both doses of the vaccines. We discuss the findings with Northwestern University professor and biological anthropologist Thomas McDade.

Drinking at least one cup of coffee per day was associated with a decreased risk of about 10% when it came to contracting COVID-19, according to a new Northwestern Medicine study.

A notable Northwestern alum is in town for some major recognition. “Game of Thrones” author George RR Martin was awarded an honorary doctorate at Monday’s commencement ceremony. We caught up with Martin to talk about the GOT phenomenon and his time at Northwestern.

For pregnant women, fetal monitoring devices are a cumbersome array of wires and tape that require constant adjustment and, quite literally, tether the patient to a hospital bed. A team of researchers at Northwestern University is working to change that.

As students wrap up their spring semesters, colleges and universities have started announcing plans for the fall. We discuss the outlook for three area universities.

Far more Chicagoans may have been infected by COVID-19 than previously thought. We discuss the preliminary findings of a new study with Dr. Elizabeth McNally of Northwestern University Feinberg School of Medicine.

From the football field to the front office: We speak with Jason Wright, the NFL’s first Black team president.

Some college campuses are seeing alarming spikes in the number of COVID-19 cases. Many schools have launched widespread testing efforts, but reports of student parties and gatherings have led to increased restrictions.

Northwestern Medicine is seeking 5,000 people who are at risk of exposure to the coronavirus and are interested in participating in vaccine studies to join its newly launched COVID Prevention Trials Registry.

Worn 24/7, the soft, flexible sensor is being used to monitor cough, shortness of breath and fever in a small number of patients and front-line health care workers. Researchers hope the device can provide more insight about the coronavirus.

He is optimistic about the development of vaccines and treatments to slow the spread of COVID-19 but describes the national response to the virus as a “disgrace.” We speak with Dr. Robert Murphy of Northwestern University.

Kate Ramirez is asking for prayers and donations as her 28-year-old sister, Mayra, recovers from a double lung transplant she received earlier this month as a result of complications from COVID-19. 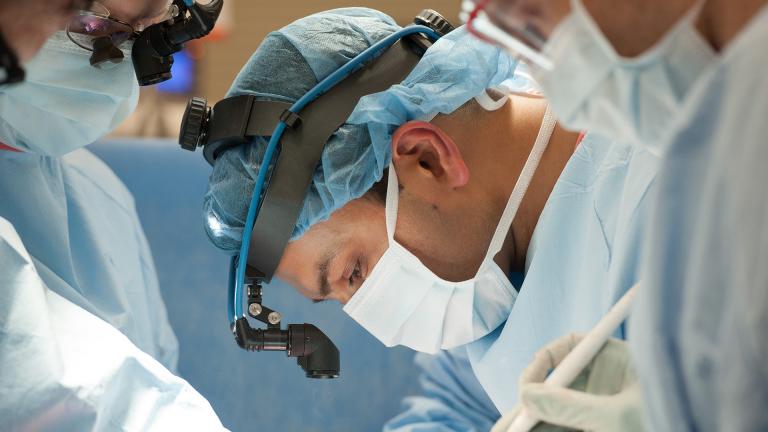 After six weeks on a ventilator and life-support machine, a 20-year-old woman whose lungs were damaged by COVID-19 received what is believed to be among the first double lung transplants performed on a survivor of the virus.