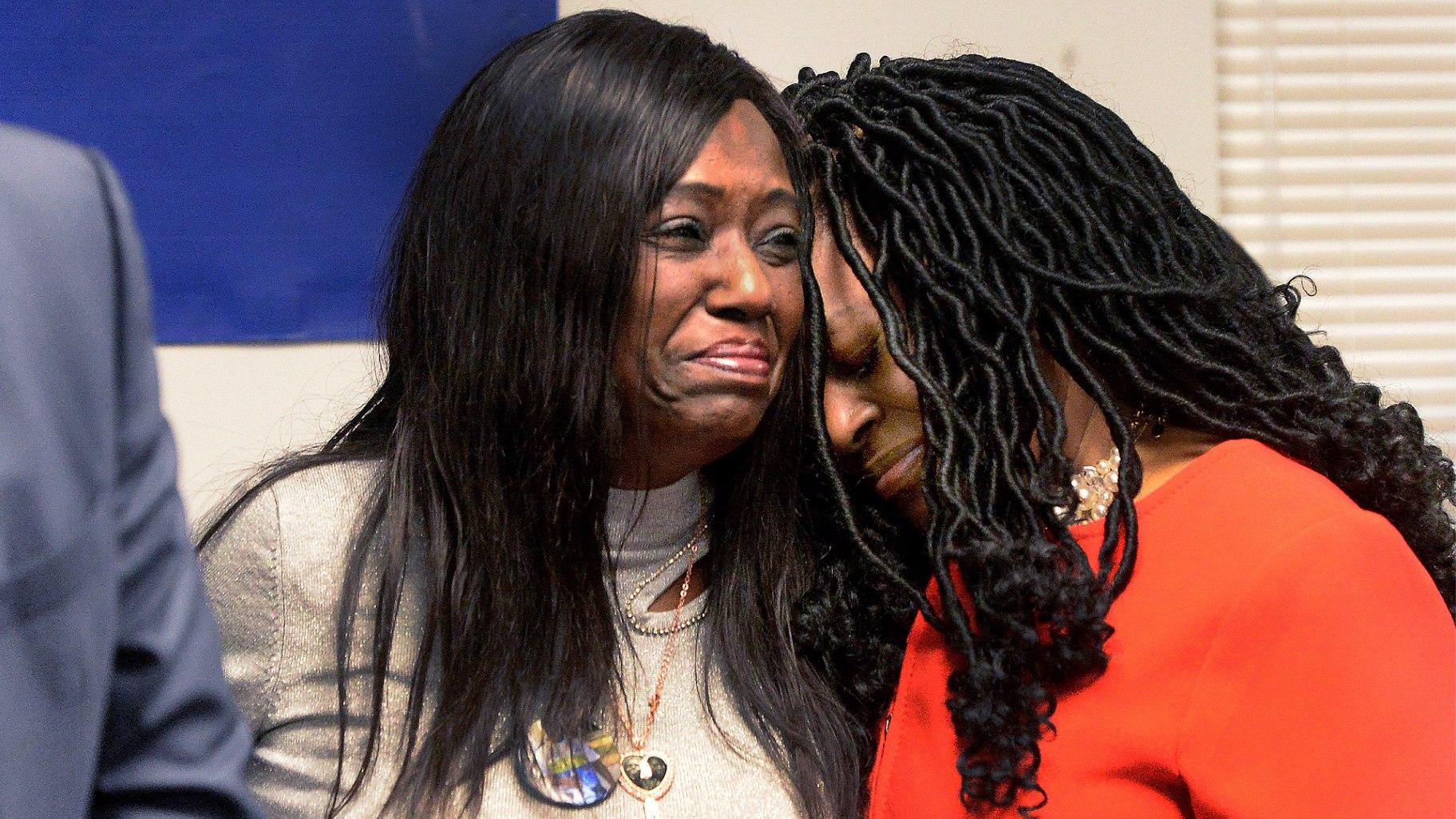 Rosena Washington, left, mother of Earl Moore Jr., and NAACP Springfield, Ill., branch president and state director Teresa Haley, comfort each other during a news conference, Thursday Jan. 19, 2023, in Springfield. Moore's family has filed a lawsuit against the two paramedics and their employer, in the death of Moore attorneys said Thursday. (Thomas Turney / The State Journal-Register via AP)

Finley and Cadigan were summoned Dec. 18 to Moore’s Springfield apartment. Police body camera video shows the officers trying to get Moore to his feet to walk out the door for medical assistance and then placing him in a prone position on the gurney. Cadigan, an emergency medical technician, then strapped him in while Finley, a paramedic, put a blanket over him.

As the defendants entered the courtroom, Finley saw seven family members sitting in the front row. She took a seat at the defense table and with tears streaming down her face looked at her family and mouthed “I’m sorry.” Family members declined to comment to The Associated Press.

An autopsy revealed that Moore died of “positional asphyxiation” and that he had two broken ribs, which State’s Attorney Dan Wright attributed to his being strapped in so tightly facedown. Finley later told hospital officials and an investigator that Moore had been combative.

“There’s no medical reason to transport someone in a prone position,” Wright said.

Referring to Springfield police bodycam video, he continued, “Clearly, Mr. Moore is not combative. He was the complete opposite of combative. He needed help. For them to cover themselves by telling hospital staff that he was combative goes to their credibility.”

Under Illinois law, a first-degree murder charge applies when a defendant “knows that such acts create a strong probability of death or great bodily harm.” Experts have said it’s rare for emergency medical providers to face criminal charges in a patient’s death.

“If this goes to trial, the state is going to have to prove beyond a reasonable doubt that when they placed him on the gurney, that they thought to themselves, ‘I think I’m killing him,’” said Justin Kuehn, one of Cadigan’s attorneys. “Were their acts reckless? That’s for another day.”

If convicted, Finley, 44 and Cadigan, 50, could each face 20 to 60 years in prison. They pleaded not guilty and are being held in the Sangamon County Jail on $1 million bond each.

Their next court date is Feb. 6. Their attorneys say they will next seek their release on personal recognizance.

Finley and Cadigan told Weisahaar that Moore had been combative. Cadigan said he based that conclusion on seeing Moore flailing and a police officer jump out of the way, Weisahaar said.

Bodycam footage showed Moore unable or unwilling to stand on his own and at times thrashing. His blood-alcohol level was .077, which is just under the legal limit for driving in Illinois of .08. Finley entered the apartment and screamed at Moore to get up.

Weisahaar said Finley told him that she had monitored Moore’s vital signs on the way to HSHS St. John’s Hospital. But Wright played for the court a recording of Finley’s call to alert the hospital of their arrival in which she said, “I’m not messing with vitals because I don’t want to poke the bear.”

Both Finley and Cadigan had sufficient training and knowledge to know that Moore’s position was detrimental, Weisahaar testified. He said Cadigan told him that in 20 years, he had never been instructed that putting a patient in the prone position was dangerous.

But Weisahaar said he learned that Cadigan had attended two training sessions just last year in which the instructor insisted that warning against prone positions was emphasized.

“There are two venues — civil and criminal. We’re in the wrong venue,” Hanken said. “You’ve not heard one scintilla of evidence that goes to accountability.”

Moore’s family announced Thursday that they have filed a wrongful death lawsuit against Finley, Cadigan and their employer, LifeStar Ambulance Service.