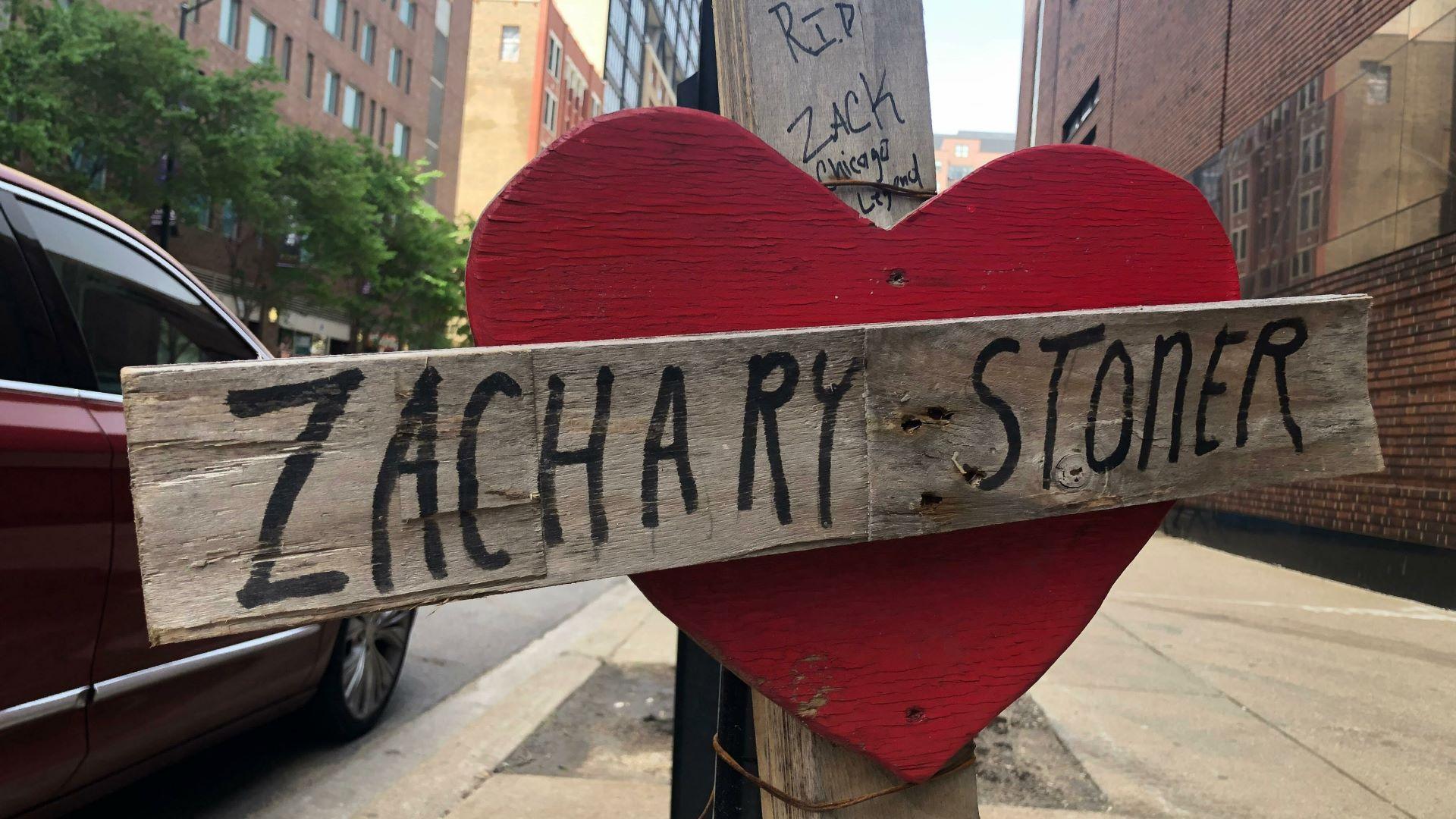 In this May 22, 2019 photo, a makeshift cross marking the spot where Zachary Stoner was killed on May 30, 2018, in a drive-by shooting in downtown Chicago. (AP Photo/Michael Tarm)

CHICAGO (AP) — The 2018 killing of “ZackTV," a trailblazer in a perilous genre of gangland reporting he called "‘hood CNN,” seemed destined to go unsolved, even though gunmen attacked him on a downtown Chicago street lined with surveillance cameras.

Police never announced arrests in the shooting of Zachary Stoner, who drew a national YouTube following filling a media niche with up-close stories about the lives and deaths of gang members and affiliated rappers from places other reporters were afraid to go.

But police records obtained by The Associated Press reveal investigators believe they solved his homicide years ago when they arrested members of South Side Chicago's “Perry Avenue” gang. But prosecutors in 2019 declined to prosecute and police were forced to release the suspects.

Police say the Cook County State’s Attorney’s Office cited the possibility that the two sides in the shooting on May 30, 2018, were “mutual combatants” — a disputed legal concept that’s a throwback to duels between nobles or prearranged gunfights in the Wild West.

That prosecutors passed on charges on those grounds raises questions about whether Chicago gangs can literally get away with murder when it’s unclear who initiated a shooting and who returned fire in self-defense.

The case and arrest reports, obtained in an open-records request, offer previously unreported details about what may have precipitated Stoner's killing after he left the crowded Clark Street Refuge bar. Relying on video, eyewitnesses, cellphone location data and ballistics on a bullet removed from the 30-year-old's brain, police arrested five suspects, age 19 to 22, in 2018 and 2019, on probable cause of first-degree murder.

Prosecutors also cited “inconsistent witnesses” as a reason to not prosecute. Two of the suspects have since been killed. Another, identified by a witness, told police: “I didn’t pull the trigger.”

One Illinois court defined mutual combat as an agreement to fight or where sides in “a sudden quarrel and in hot blood, mutually fight upon equal terms.” Some courts only allow defendants to argue mutual combat at sentencing in bids for leniency.

Police said Chicago prosecutors cited it last year in an initial decision not to prosecute suspects in a deadly West Side shootout between alleged Four Corner Hustlers factions. The decision and the purported basis for it angered Mayor Lori Lightfoot. Letting gunmen act with impunity, she said, “will send this city into chaos.”

Stoner’s ZackTV1 channel was profitable, but the work was dangerous. The otherwise upbeat Stoner had predicted that a gang, piqued by his reporting, may try to kill him, so he always had a gun within reach. He explained in one video: “You just gotta be prepared.”

The documents reveal two of Stoner’s friends were passengers in his SUV when gunmen in a minivan attacked. One friend drew a gun and returned fire through the windshield. Records don’t allege anyone in his SUV fired first.

The partially redacted records don't directly state a motive in the shooting.

Gang violence, though, is easily triggered, a 2019 University of Illinois gang report said, pointing to pervasive gang “hypersensitivity" and “hypermasculinity." It said violence these days typically stems from perceived slights that can escalate into years of tit-for-tat revenge killings.

Stoner didn’t belong to a gang but was raised in “Goon Town" gang territory. Young Black men are often wrongly assumed by gangs, and police, to be in the gang on their block. So other gangs may have viewed Stoner as a Goon Town associate.

Goon Town and Perry Avenue, both located on the South Side, are longtime foes. For years, they've posted rap videos on social media taunting each other.

Police say Perry Avenue, like Goon Town, is a Gangster Disciples faction. Enmity between factions under the same umbrella gang is common, with members expressing primary loyalty to their faction, the gang report said.

At the bar, Stoner smiled as he mingled in his White Sox cap, according to video posted by another videographer. To many of the 100-plus revelers, “ZackTV" was a household name, admired in the Chicago hip-hop community for boosting local rappers and encouraging peace between gangs.

But the joyous atmosphere soured as two factions engaged in a rap battle, delivering derogatory lyrics about each other. One witness said Stoner appeared nervous as he walked out, imploring his friends to leave too.

While the records black out Stoner's passengers' names, his friend, rapper Thomas “T-Streetz” Davis, said on social media that he was one. And the same video shows him at the bar near Stoner. He and the other passenger have also since died.

At 1:29 a.m., two blocks from the bar, the minivan bore down on Stoner, guns out its windows. Bullets riddled his SUV. One ripped through his shoulder; one struck behind his ear, lodging in his brain. When he crashed into a street lamp, his friends, one with graze wounds, fled. They later said they feared their opponents would attack again.

Police arrived at 1:35 a.m. to find Stoner alone, slumped in his seat. One officer checked his pulse. He was still alive. An officer also found Stoner’s .40-caliber pistol at his feet. It was loaded, but he never got off a shot.

Hours before Stoner's June 9, 2018, funeral, a gunman killed Davis on a South Side sidewalk. An autopsy noted a word tattooed across his back. It read: “ZackTV.”

The New York-based Committee to Protect Journalists expressed concern Stoner was killed for his journalism. That others were with him raises the possibility that he wasn't the intended target.

Police consider Stoner’s case cleared. They clear under 30% of homicides in the year they occur. Cases are cleared when police deem them solved, though this doesn’t necessarily equate to formal charges or prosecutions.

One challenge for investigators in a city that tallied nearly 800 killings in 2021 is an ever-growing case backlog. Another is persuading witnesses to shirk the street's no-snitch code and trust a police department with a history of abuses.

In February, she announced charges in the Four Corner Hustlers’ case.

Prosecutors are leaving the door open to charges in Stoner's case. The statement this week said they “will review any additional information that is brought to us by police."