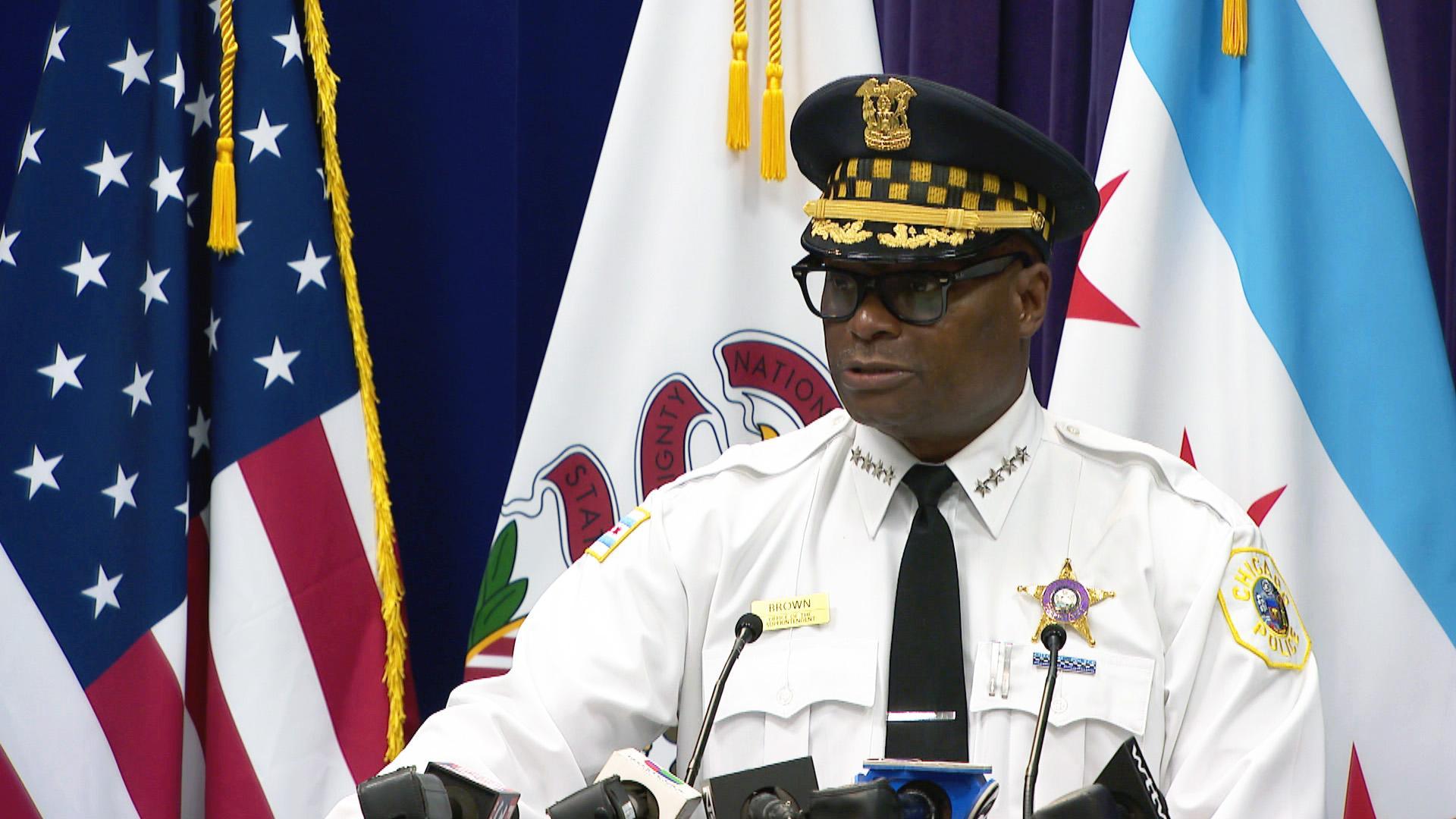 Chicago Police Supt. David Brown defended on Friday his decision not to fire an officer who lied about his ties to the far-right Proud Boys extremist group.

The officer, who has not been identified by city officials in keeping with rules governing misconduct investigations, was suspended for 120 days.

However, Brown said investigators with the department’s Bureau of Internal Affairs “were not able to prove by a preponderance of the evidence that this officer was a member of, or was associated with, the Proud Boys, or any other hate group.”

The officer was found to have committed “minor violations,” and a 120-day suspension represented a “high-level of discipline,” Brown said.

Bureau of Internal Affairs Chief Yolanda Talley told members of the City Council that the officer “felt so bad” about being associated with the Proud Boys that he “volunteered” to be suspended for 120 days. If he had fought the discipline, he would have likely only been suspended for five days, Talley said, telling alderpeople she was “speaking frankly.”

The Proud Boys have been labeled by the FBI as an antisemitic white supremacy organization, according to the third quarterly report by Inspector General Deborah Witzburg released on Oct. 14 that documented the culmination of the probe into the officer and his ties to the Proud Boys. The Proud Boys has been designated a hate group by the Southern Poverty Law Center.

Several current and former members of the Proud Boys have been charged with seditious conspiracy for what federal prosecutors say was a coordinated attack on the U.S. Capitol to stop Congress from certifying President Joe Biden’s 2020 electoral victory.

A former leader of the group pleaded guilty Oct. 6 and agreed to cooperate with the government’s ongoing investigation.

If the FBI considered the Proud Boys a hate group, the probe would have had a different result, Talley said.

The officer was the subject of two probes by the Bureau of Internal Affairs. The first culminated with a recommendation that the officer be suspended for five days for “failing to submit a written report explaining that they were under investigation by the FBI,” according to the inspector general’s report.

Former Inspector General Joseph Ferguson recommended in November 2020 that that probe be reopened because the investigation was “materially deficient” and failed to determine whether the officer “made inconsistent statements to the FBI and (Chicago Police Department Bureau of Internal Affairs) and brought discredit upon the (Chicago Police Department) by virtue of their involvement with the Proud Boys,” according to the report.

Police leaders agreed to reopen the probe, but it “does not appear to have revisited the original allegations,” as recommended by the inspector general, according to the report.

Instead, the police department filed five new allegations against the officer, including that they made a false statement about attending a “Proud Boy barbecue” and brought discredit on the Chicago Police Department by “expressing support for a Proud Boy member’s actions in online forums” and by “participating in Proud Boy online forums,” according to the report.

That probe determined the officer made a “a false statement” during the course of the investigation when asked if they attended a Proud Boy sponsored barbecue and made a “a contradicting statement” during a recorded interview about participation in a group chat with members of the Proud Boys, according to the report.

Ferguson urged the superintendent to consider terminating the officer because they violated departmental rules prohibiting the making of false reports. Brown did not respond to that recommendation and approved the 120-day suspension.

Mayor Lori Lightfoot has also defended the decision not to fire the officer.

The officer was “thoroughly investigated” and “given a lengthy period of suspension,” Lightfoot said on Tuesday.

“It is about accountability,” Lightfoot said. “I think the police department took the steps that the evidence that was gathered through the course of the two investigations warranted.”

Brown testified for more than five hours during a hearing marked by tense exchanges between the city’s top law enforcement officer and members of the City Council — and between alderpeople.

Ald. Matt O’Shea (19th Ward) was one of many alderpeople to press Brown to deploy more officers to their wards. Turning to his colleagues, O’Shea asked for a show of hands among those who wanted fewer officers assigned to their wards.

Only Ald. Byron Sigcho Lopez (25th Ward) put his hand up — prompting several alderpeople to call out that they would gladly take the officers.

During the uproar, Sigcho Lopez rose to leave the chambers — but turned to address his colleagues before exiting.

In addition to questions about his strategy to reduce crime and violence, Brown was pressed on efforts to recruit new officers to fill the department’s hundreds of vacant positions.

Shootings have declined by 20% in 2022, as compared with 2021, and murders have dropped 18% according to data provided by Brown. However, compared to 2019, murders and shootings have risen by 30%, according to Chicago Police data.

The department is set to increase spending significantly on the number of officers assigned to patrol the CTA, with that budget jumping from $10.7 million in 2022 to $30 million in 2023. In recent months, a number of high-profile shootings and stabbings have grabbed headlines and led many Chicagoans to question whether it is safe to ride the CTA.

“The CTA is a mess,” Osterman said. “People are afraid to take the Red Line.”

Ald. Scott Waguespack (32nd Ward) told Brown he never sees officers on the CTA’s Blue Line, and no longer rides the Red Line with his children.

Brown promised “to tighten up” deployments on the CTA’s Blue Line, which many tourists and visitors ride from O’Hare Airport.

Members of the City Council also pressed Brown on efforts, approved as part of the 2022 budget, to hire 11 additional clinical therapists — enough to assign one clinician to work full time in each of the city’s 22 police districts. The department has just 13 therapists on staff, with another two expected to start in the coming weeks.

Brown acknowledged that the city is having trouble filling those positions because it is offering a starting salary of $77,000, while suburbs are offering substantially more.

Brown also blamed an “explosion” of special events for swelling the department’s overtime costs. While the 2022 budget set aside $100 million to pay police officers overtime, the department has already spent $112 million on overtime.

That triggered a series of questions from alderpeople about the cost of protecting the NASCAR street race, which will take over the streets around downtown on July 2.

Brown said he did not know how much it would cost the city to protect the racers, NASCAR employees and spectators — but said it was likely to be similar to the cost incurred by the Lollapalooza festival.

Ald. Susan Sadlowski Garza (10th Ward) told Brown that diverting police resources downtown during the holiday weekend, which is typically among the most violent every year, will put “our wards in danger.”

The Chicago Police Department has also paid $91 million so far this year to resolve lawsuits that allege misconduct by members of the department, 11% more than the city set aside as part of the 2022 budget.