“I want to be a tower crane operator. I’m not afraid of heights,” Moss says with a laugh.

She’s working on developing the skills she needs through the Chicago Women in Trades training program.

“I love everything about the program. I love how they push you,” she said.

It’s a solid position to be in, after her previous struggles finding work.

“I was working at the post office and because of my background they fired me,” Moss said. “It broke me down, put me into depression, honestly. Because the way they went about it, it coulda changed. But I guess it is what it is.”

Her background involves a criminal record, and time spent “in and out” of prison.

Moss — like many people with similar backgrounds — battles to keep her past from holding her back. 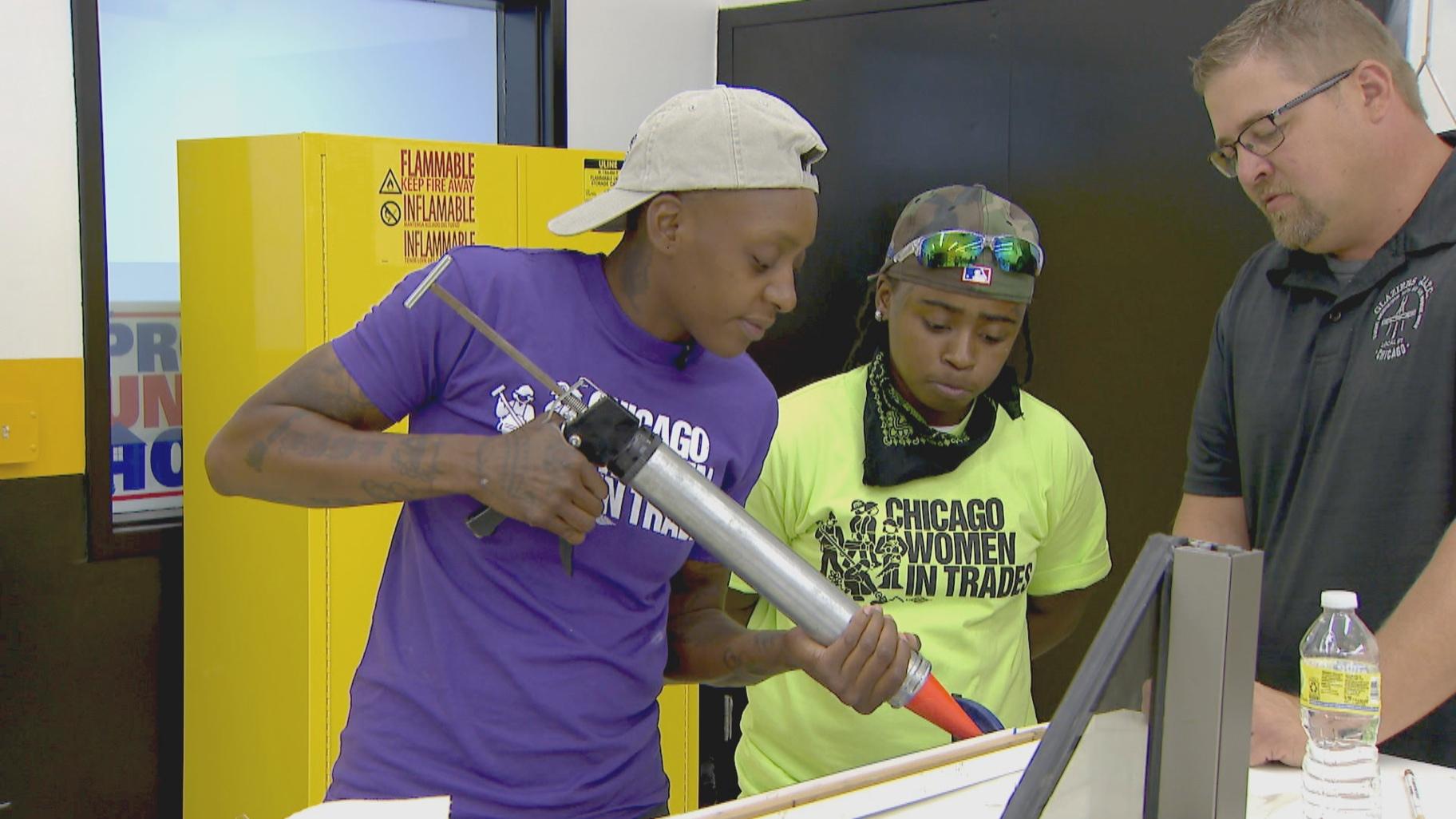 One of her classmates is Latifah Curry, who’s been home from prison for nearly 10 years after a drug felony.

“I wanna do stuff, but, it’s like, every time I try the background check just messes me up. That’s why I took this opportunity,” Curry said.

The Chicago Women in Trades training program is open to all women, but is especially helpful for women like Curry and Moss.

“The trades are very felony friendly,” explains Ebba Schmid, workforce coordinator for Chicago Women in Trades. “They certainly do some background checks, with certain job sites: schools, hospitals, the airport, that sort of thing. But there are a lot of opportunities for people who have a wide range of criminal background histories. They are able to come into trades and earn really great wages and really great benefits.”

But it’s just one solution to a widespread issue.

“In the state of Illinois there are over 500 employment laws, policies and sanctions, restrictions on the kinds of jobs people can have,” explains Reuben Jonathan Miller, a professor at University of Chicago. “If you include business licenses and property rights, that number jumps up to close to 900. That’s one state — 900! That means there are entire categories of employment for which one need not apply.”

Many people who’ve been impacted by the criminal legal system say they face this problem frequently.

When asked what kind of jobs she’s been denied because of her background, Timesha Brown, says, “Amazon, UPS, of course, banks and all that.”

When asked if he got any of those jobs, “No,” he replies.

“They shoot me down all the time, because it was two felonies. When they see it, they didn’t allow me in the door,” Curry said.

To get around the regular rejection, many apply for jobs through temporary staffing agencies, only to be let go when the background check reveals a criminal record.

“When they’re working with a temp agency, they can get that immediate employment and fast,” said Sodiqa Williams, senior vice president of reentry services at Safer Foundation.

“I went through an agency to get the job, which, you tell them you’re a felon, they don’t have no problem placing you, but when the company wants to hire you on, they want to do an individual background check. When they found out I was a felon, they said ‘Hey, great job here at the warehouse at shipping and receiving, but you gotta go,” Reyes recalled of an instance when he was fired from a job.

And where people aren’t absolutely barred from employment, it gets complicated. 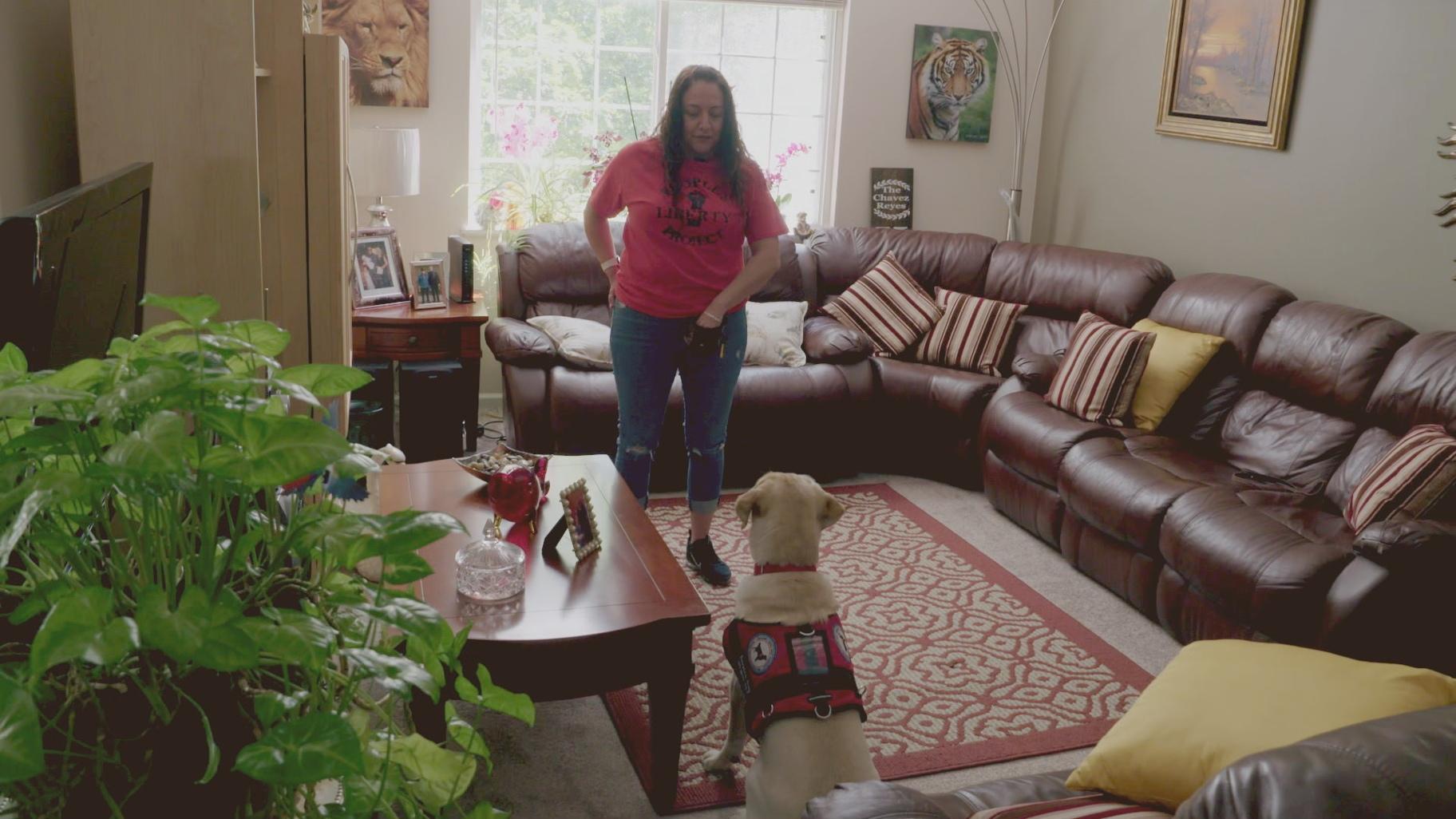 It took Maria Garza six months to receive a health care waiver to work as a receptionist. (WTTW News)

It all took Maria Garza six months to get a health care waiver to work as a receptionist in a clinic.

“You go through a whole process of applications and essays and story writing, like changing the narrative of the charge of what happened that day and why I should be considered now,” she explained from her godmother’s living room, where she’s temporarily staying.

It can be a tough process to navigate for someone returning home from prison with limited access to resources or job training.

However, Illinois has made some changes.

“In March 2021, the Illinois legislature created a new amendment to the Human Rights Act, specifically prohibiting employers from taking adverse action against a job candidate or employee for criminal conviction, unless certain processes and procedures were in place,” said Jeff Risch, an employment attorney at Smith Amundsen LLC.

Labor attorneys say those procedures are meant to make it harder for an employer to deny a job based solely on the existence of a record, which is also a civil rights violation.

“They have to consider how long ago was the offense? What kind of rehabilitation have they had? Are they working? Are they a good steward? We think we’ve seen improvement in the number of people who are able to get their licenses,” Williams says.

Risch even argues some employers would like to be able to hire non-traditional candidates for jobs, especially in a labor market where it’s tough to find workers.

He has an idea of what’s holding them back.

“‘We want to hire this individual, but because we don’t have that civil immunity in hiring this individual, it’s just too much of a risk.’ Whether fair or unfair, I think that has a lot of truth to it in my experience,” Risch said.

That civil immunity would protect employers from liability — a lawsuit if an employee does commit another crime on the job.

“Fingers will be pointed, second guessing ‘why did you hire this individual in the first place? why did you take that risk?’” Risch explains.

Many employers are avoiding the risk, by simply not hiring people with criminal records.

“We throw millions, billions at alternative solutions: Policing and all these other things and we know that’s not working because we see it. It’s time to go for an approach where we’re investing not only in property, but people,” Williams says.

Kimberly Moss says she tries not to dwell on her criminal record.

“I just try to stay out of trouble. I let the past be the past. I don’t think about that stuff.”

Instead, she focuses on the future she can build with help from a program like this.