In an interview with WTTW News, Holder, who served as President Barack Obama’s Attorney General from 2009 to 2015, said that Trump “clearly had the intent to try to steal the election to foment a coup.”

Holder noted Trump’s phone conversation with former acting Deputy General Richard Donoghue in which the former president told Donoghue to “just say the election was corrupt and leave the rest to me and Republican congressmen.”

“I think we are getting extremely close to where you’re going to be able to say that an indictable case can be made against the former president,” said Holder. “And if that’s the case, he should be indicted. He has to be held accountable. And we also have to think that what happens in 2022 will send a message to the future. And we have to deter people who, like Trump, might try to undermine our democracy and remain in power even though they don't have the support of the American people.”

Holder criticized the recent Supreme Court ruling that overturned Roe v. Wade and returned the issue of abortion access back to the states. He said it was a decision that many view as being ideologically driven.

“That was not a new finding. It wasn’t some new found law, some new found facts. That was simply a change in court personnel and that’s not the way in which our system works,” said Holder.

Courts, including the Supreme Court, are expected to largely make rulings based on prior legal precedents.

“To overrule something that was almost 50 years old and upon which people had ordered their lives, upon which people have relied, on the basis that the court stated in that opinion by Justice Alito really delegitimizes the court and puts at risk the way in which it is viewed by the American people,” said Holder.

Addressing the issue of America’s epidemic of gun violence and mass shootings, Holder said the failure to pass meaningful gun regulation was “an indictment of our political system.”

“The American people are united around some common sense things that would make those kinds of shootings far less likely to happen,” said Holder.  “Universal background checks, waiting periods, the banning of assault weapons, there's majority support for all of those things and yet our political system does not have the capacity it seems to get out of the pockets of the gun lobby and do what the people want to do.”

In “Our Unfinished March: the violent past and imperiled future of the vote. A history, a crisis, a plan” Eric Holder argues that since the Supreme Court struck down parts of the Voting Rights Act in 2013, states have sought to suppress and restrict voting rights. 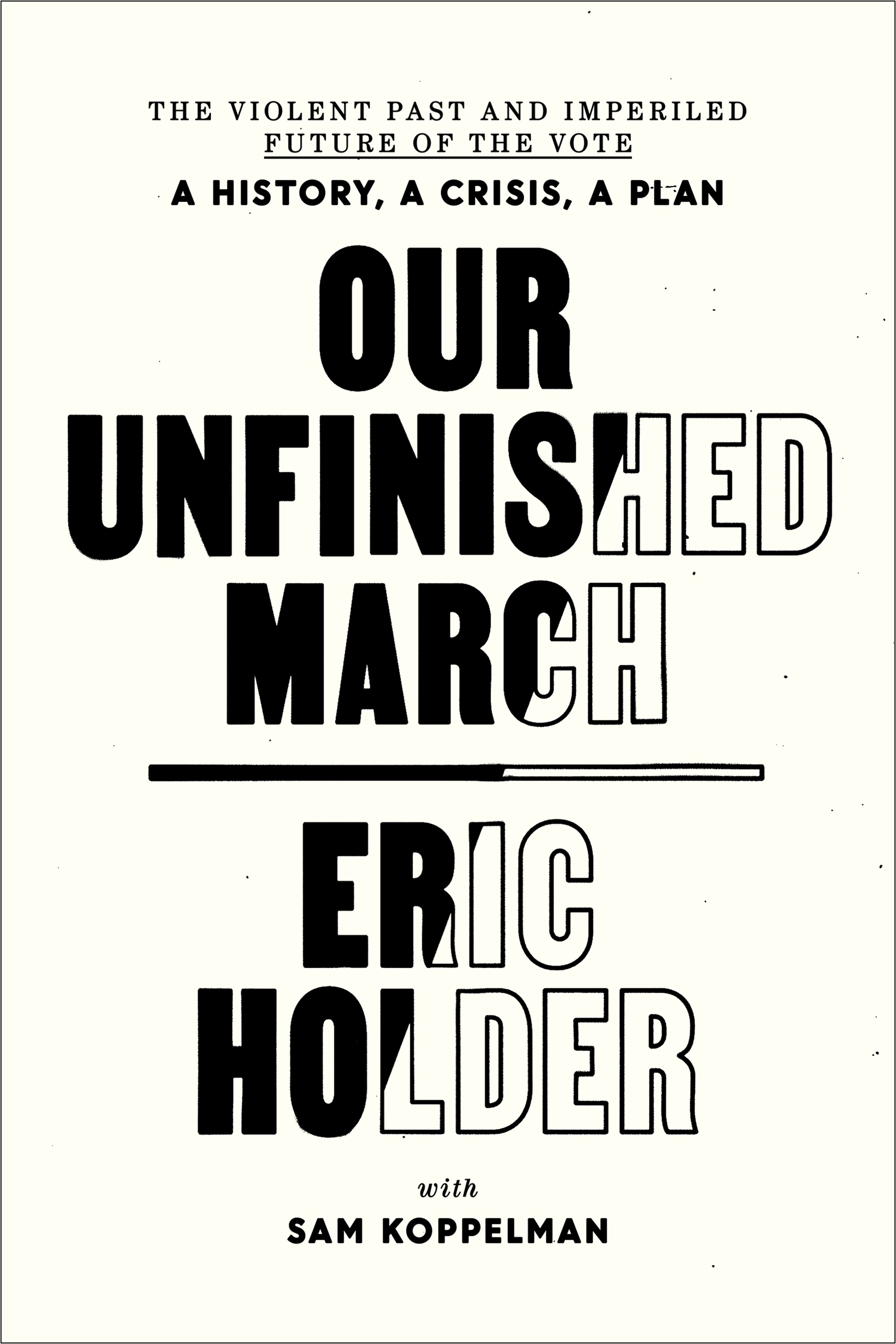 How White Men Won the Vote

“The past is never dead. It’s not even past.”

Every generation likes to say the challenges they’re facing are unprecedented—but when it comes to attacks on our right to vote, the reason we need to be vigilant isn’t that this threat is novel. It’s that it isn’t.

For most of America’s history, democracy hasn’t been the rule. It’s been the exception.

That was true before the first shots were fired in Lexington and Concord. Back then, each of the thirteen colonies had its own rules for voting. What they had in common, though, was that their elections didn’t reflect the will of the people.

In this way, when America was founded, voting wasn’t a right. It was a privilege, one our founders believed should be reserved only for citizens with white skin, both X and Y chromosomes, and enough land, cash, or bodies—yes, bodies—to their name.

Exactly how much property you needed to own varied from colony to colony. In New Hampshire, they measured property based on its value in cash: If you weren’t worth 50 pounds, you were out of luck. In Virginia, whether you could vote came down to how much land you owned: If you had 100 acres, you were good. If you only had 25, they needed to be well manicured. And if you had any fewer, you’d better not show up on Election Day, lest you be told you were too broke to vote.

In some colonies, like Connecticut, property qualifications were, as Governor Oliver Wolcott wrote, “essentially nugatory,” meaning they weren’t enforced at all. But in most, they were binding. And in some, if you were Catholic or Jewish it didn’t even matter how much property you had; unless you were Protestant, you had no business casting a ballot.

But while restrictions on the right to vote are as old as America, so too is the desire among Americans to be the masters of our own fate. That belief in the power of the people is what inspired the colonies to declare their independence from an empire. And in the centuries that have followed, generation after generation of suffragists have devoted their lives to making the dream of self-determination a reality for all.

As you read the following chapters, you will recognize, as I do every time I reflect on the history of our country, that the expansion of the franchise was anything but inevitable. It was, instead, the work of Americans from all backgrounds—rich and poor, Black and white, men and women—none of whom were perfect, some of whom you’ve heard of, others of whom have been forgotten, all of whom shared a conviction that they should have a say in how they were governed, even if they had to risk their lives to win it.

Thomas Wilson Dorr was one of those Americans, but he wasn’t exactly the kind of guy you’d expect to become a leader in the fight for voting rights. He was a rich kid who went to Phillips Exeter Academy for high school and became a Harvard freshman at fourteen years old. A portrait of a populist he was not.

He much preferred to spend his time with people who had it worse than he did—people like Seth Luther, a self-proclaimed “journeyman carpenter” from Providence, Rhode Island, who helped convince Dorr that their home state was in need of a revolution.

For more than a century, Rhode Island had laws in place that limited the right to vote to residents who owned property valued at upward of $134. For Luther, whose father was a veteran of the Revolutionary War, this felt arbitrary, and not only that—it also felt like a slap in the face of those who risked their lives for independence from Britain. “This law is contrary to the Declaration of Independence,” he declared in his 1833 “Address on the Right of Free Suffrage,” adding that it was “strange that a self-evident truth should require proof.” He then left those who disagreed with him with an insult fit for a rap battle: “May all Traitors, Tyrants, Tories, and Aristocrats never find anything but onions to wipe their weeping eyes.”

Dorr lacked Luther’s oratory gifts, but he was a more palatable messenger—and in July 1841, a decade after Luther delivered his speech, the Harvard wunderkind teamed up with the members of the Rhode Island Suffrage Association to lead a movement aimed at expanding the franchise. Together, they convened a People’s Constitutional Convention, invited folks who didn’t have access to the ballot from across the state to join them, and drafted a document they proposed should be the new constitution of Rhode Island. This “People’s Constitution,” if implemented, would have eliminated property qualifications once and for, well, not all. Despite objections from abolitionists—and despite Dorr’s past membership in the American Anti-Slavery Society—the People’s Constitutional Convention decided to bar African Americans from voting.

In the months that followed, the Suffrage Association barnstormed from town to town, making the case for change, and ultimately deciding to bring the People’s Constitution up for a statewide vote. At the time, it was unclear whether this referendum would have any standing, but at the very least they thought it would send a loud message. And it did: On Election Day, in April 1842, 14,000 Rhode Islanders voted for the People’s Constitution, while just 52 voted against it.

Later that year, under the questionable jurisdiction of this new constitution, Dorr was elected governor. But there was a problem. Rhode Island’s supreme court ruled that the People’s Constitution was . . . unconstitutional. And the state’s general assembly, along with the four-term incumbent governor, Samuel Ward King, made it clear that if Dorr tried to take office, he would be guilty of treason. Even President John Tyler promised to send federal troops to Rhode Island to quell the rebellion.

But none of this deterred Dorr. On May 3, 1842, the Suffrage Association came together and held an inaugural parade for him. And two weeks later, under the cover of night, they stormed the state’s arsenal—even though Dorr’s own father and uncles were in the building. They were living the mantra of Seth Luther: “Peaceably if we can. Forcibly if we must.”

The problem was that this makeshift militia wasn’t exactly built for war—especially because they had to square up against not only the state of Rhode Island, but also the African Americans who decided to fight alongside the incumbent government after they were spurned by the rebels. And when it came time for Dorr’s soldiers to fire their cannons, the weapons malfunctioned. That is how Dorr’s rebellion ended—not with a bang but a whimper.

Dorr tried to flee the state but eventually decided to return. And when he did, the governor declared martial law, which led to the arrest of Dorr and more than a hundred members of his militia, who were bound with ropes, starved for a day, and brutalized by the state. At his hearing, Dorr was sentenced to life and hard labor, but after public outcry when he fell ill behind bars, he was released, and died a few years later at the age of forty-nine—a riches-to-rags story.

Luther, meanwhile, had a mental breakdown during his imprisonment, robbed a bank when he was released, passed away in the Vermont Asylum for the Insane soon after, and was laid to rest in an unmarked grave.

But while the government crushed the rebellion, they did write up a new constitution within months. By the end of 1842, both white and Black Rhode Islanders without land could vote. And decades later, long after he died in infamy, Thomas Dorr was recognized by the state of Rhode Island as its sixteenth governor.

When America declared our independence from Great Britain and won the Revolutionary War, our founders were in an awkward spot.

On the one hand, they wanted to build a government that, unlike Britain’s, was actually representative of the people. After all, their slogan during the revolution had been “No taxation without representation,” and it would’ve been tough to just say “never mind” after the war was over. On the other hand, the framers needed to receive sign-off on the Constitution from colonies where the promise of the Declaration of Independence didn’t even remotely resemble reality, as evidenced by the millions of people they enslaved. And many of the founders themselves didn’t actually believe in the equality of the polity.

Excerpted from “Our Unfinished March” by Eric Holder with Sam Koppelman Copyright © 2022 by Eric Holder. Excerpted by permission of One World. All rights reserved. No part of this excerpt may be reproduced or reprinted without permission in writing from the publisher.