Amazon Workers in NYC Vote to Unionize, a First For Company 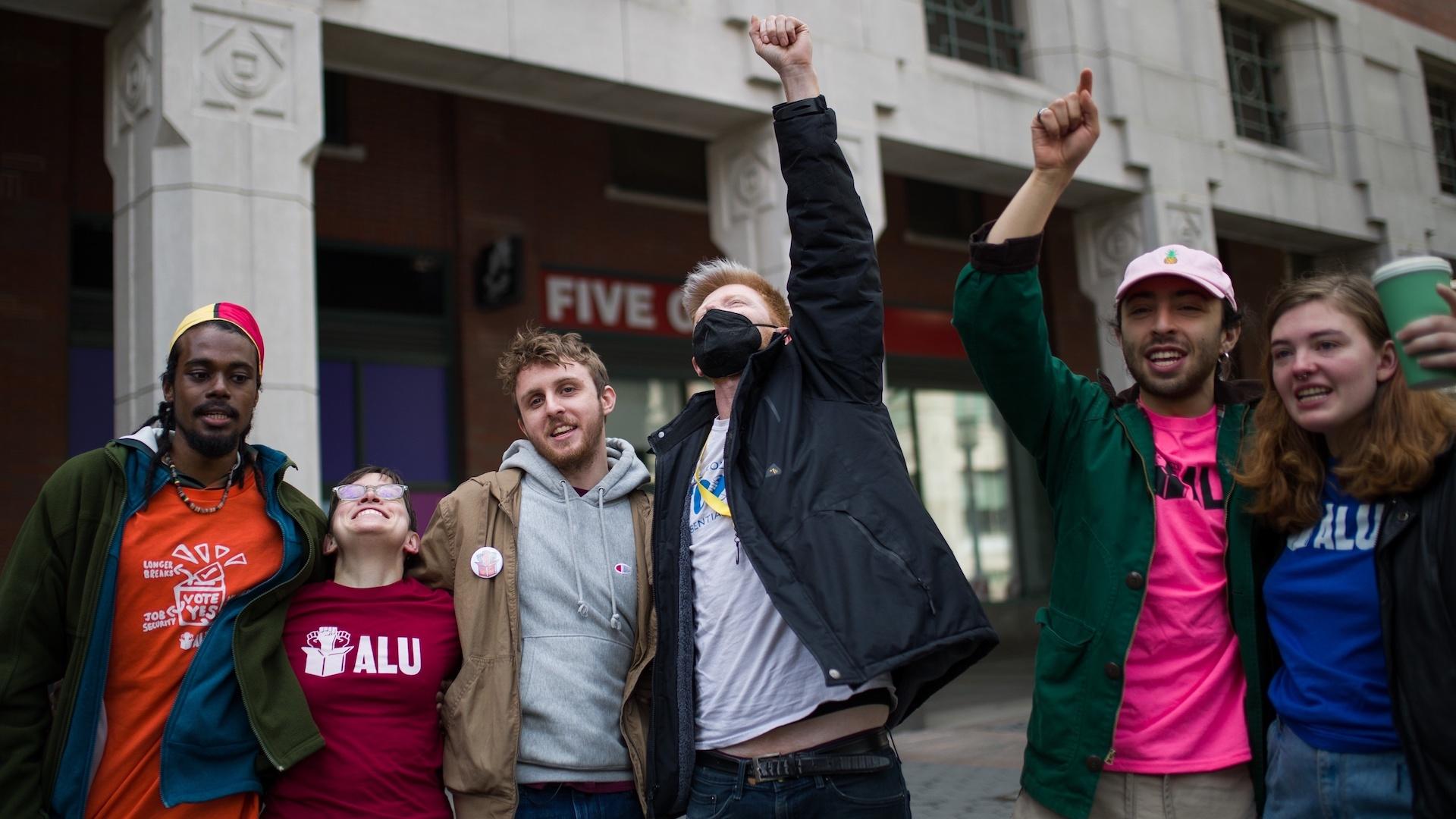 Warehouse workers cast 2,654 votes in favor of a union, giving the fledgling Amazon Labor Union enough support to pull off a victory. According to the National Labor Relations Board, which is overseeing the process, 2,131 workers rejected the union bid.

The 67 ballots that were challenged by either Amazon or the ALU were not enough to sway the outcome. About 57% of the more than 8,300 workers on the voter list cast their ballots. Amazon provides the list of eligible workers to the NLRB. Organizers say a high attrition rate may have shrunk that pool since the election was scheduled.

The victory was an uphill battle for the independent group, made up of former and current workers who lacked official backing from an established union and were out-gunned by the deep-pocketed retail giant. Despite obstacles, organizers believed their grassroots approach was more relatable to workers and could help them overcome where established unions have failed in the past.

Tristan Dutchin, who began working for the online retailer about a year ago, is hopeful that the new union will improve working conditions at his workplace.

“I’m excited that we’re making history,” Dutchin said. “We’re about to unionize a multibillion, trillion-dollar company. This will be a fantastic time for workers to be surrounded in a better, safer working environment.”

Meanwhile, Amazon workers in Bessemer, Alabama, appear to have rejected a union bid but outstanding challenged ballots could change the outcome. The votes were 993-to-875 against the union. A hearing to review 416 challenged ballots is expected to begin in the next few days.

The union campaigns come at a time of widespread labor unrest at many corporations. Workers at more than 140 Starbucks locations around the country, for instance, have requested union elections and several of them have already been successful.

John Logan, director of labor and employment studies at San Francisco State University, said the early vote counts in New York have been “shocking.” The nascent Amazon Labor Union, which is leading the charge on Staten Island, has no backing from an established union and is powered by former and current warehouse workers.

“I don’t think that many people thought that the Amazon Labor Union had much of a chance of winning at all,” Logan said. “And I think we’re likely to see more of those (approaches) going forward.”

After a crushing defeat last year in Bessemer, when a majority of workers voted against forming a union, the Retail, Wholesale and Department Store Union got a second chance to organize another campaign when the NLRB ordered a do-over after determining that Amazon tainted the first election.

Though RWDSU is currently lagging in the latest election, Logan said the early results were still remarkable because the union has made a good effort narrowing its margin from last year.

Chris Smalls, a fired Amazon employee who has been leading the ALU in its fight on Staten Island, bounded out the NLRB building in Brooklyn with other union organizers, pumping their fists and jumping, chanting “ALU.” They uncorked a bottle if Champagne.

Amazon has pushed back hard in the lead-up to both elections. The retail giant held mandatory meetings, where workers were told unions are a bad idea. The company also launched an anti-union website targeting workers and placed English and Spanish posters across the Staten Island facility urging them to reject the union. In Bessemer, Amazon has made some changes to but still kept a controversial U.S. Postal Service mailbox that was key in the NLRB’s decision to invalidate last year’s vote.

In a filing released on Thursday, Amazon disclosed it spent about $4.2 million last year on labor consultants, which organizers say the retailer routinely solicits to persuade workers not to unionize. It’s unclear how much it spent on such services in 2022.

Both labor fights faced unique challenges. Alabama, for instance, is a right-to-work state that prohibits a company and a union from signing a contract that requires workers to pay dues to the union that represents them.

The union landscape in Alabama is also starkly different from New York. Last year, union members accounted for 22.2% of wage and salary workers in New York, ranked only behind Hawaii, according to the U.S. Bureau of Labor Statistics. That’s more than double the national average of 10.3%. In Alabama, it’s 5.9%.

The mostly Black workforce at the Amazon facility, which opened in 2020, mirrors the Bessemer population of more than 70% Black residents, according to the latest U.S. Census data.

Pro-union workers say they want better working conditions, longer breaks and higher wages. Regular full-time employees at the Bessemer facility earn at least $15.80 an hour, higher than the estimated $14.55 per hour on average in the city. That figure is based on an analysis of the U.S. Census Bureau’s annual median household income for Bessemer of $30,284, which could include more than one worker.

The ALU said they don’t have a demographic breakdown of the warehouse workers on Staten Island and Amazon declined to provide the information to The Associated Press, citing the union vote. Internal records leaked to The New York Times from 2019 showed more than 60% of the hourly associates at the facility were Black or Latino, while most of managers were white or Asian.

Amazon workers there are seeking longer breaks, paid time off for injured employees and an hourly wage of $30, up from a minimum of just over $18 per hour offered by the company. The estimated average wage for the borough is $41 per hour, according to a similar U.S. Census Bureau analysis of Staten Island’s $85,381 median household income.

A spokesperson for Amazon said the company invests in wages and benefits, such as health care, 401(k) plans and a prepaid college tuition program to help grow workers’ careers.

“As a company, we don’t think unions are the best answer for our employees,” the spokesperson said in an emailed statement. “Our focus remains on working directly with our team to continue making Amazon a great place to work.”