When President Barack Obama signed the Affordable Care Act into law 12 years ago, it was designed to reduce the cost of health insurance for people who qualify and increase the number of Americans with access to health care. But despite the ACA’s rollout, which among other features included an expansion of Medicaid eligibility, the uninsured rate among Latinos remains more than twice that of non-Latino whites.

Through extensive personal interviews conducted over three years, University of Chicago sociology professor Robert Vargas’s new book “Uninsured in Chicago: How the Social Safety Net Leaves Latinos Behind“ takes a deep dive into what keeps Latinos feeling locked out of health care access. Vargas followed 40 Chicagoans, most of them Latino, as they learned about the options available to them under the ACA’s provisions.

“What I learned is that the legacies of people’s experiences with the health care safety net and government more broadly from the past – those legacies mattered tremendously for how people perceived the Affordable Care Act, how they made sense of information coming from the government and then ultimately how they decided whether or not to enroll,” Vargas said. “For many low-income uninsured in Chicago the first place to go to if you’re in really dire straits for health care is the county emergency room. And I don’t know how many folks make it down to the county emergency room all that often, but the experience is often very hectic. It has very long waits. And then at the end of it of folks are walking away with a very large medical bill. And so that often was a common perception that people when they heard of the ACA, they thought that that’s what it was getting them access to.”

The book delves into how the unaffordability of prescription medications – including medications like asthma inhalers – can lead to criminal records for the uninsured. One of the people Vargas interviewed, whom he calls Nick, felt like he was in a “lose-lose situation” as a result of being uninsured and having severe asthma.

“His options were to go to the county emergency room and wait while having these asthma attacks … and he would tell me that he avoided going to the county emergency room out of fear that he was going to die in the waiting room,” said Vargas. “He had another option of going to private university emergency rooms where he could get access to a doctor much faster but then end up with a huge medical bill at the end of it and rack up debt. He had another option of trying to save up money but saving up money for asthma inhalers that cost hundreds of dollars, takes time for folks who aren’t working in high paying sectors of the labor market.”

“A method of last resort was resorting to shoplifting and selling items secondhand and using the income generated by the criminal activity to pay for asthma inhalers in the informal economy,” Vargas continued. “He chose the last option and then ultimately got caught and was imprisoned.”

Vargas said that one aspect of the Affordable Care Act that he thought yielded positive results was the program’s “health navigators.”

“They’re not quite social workers. They’re not quite community health workers. Their jobs are essentially to be credible messengers to help connect people to the health care system,” Vargas said. “It created an interpersonal connection for people who were deeply disconnected and deeply disadvantaged to feel like they at least had an advocate and someone along their side to navigate all of the potential landmines that come with interfacing with a tattered social safety net.” 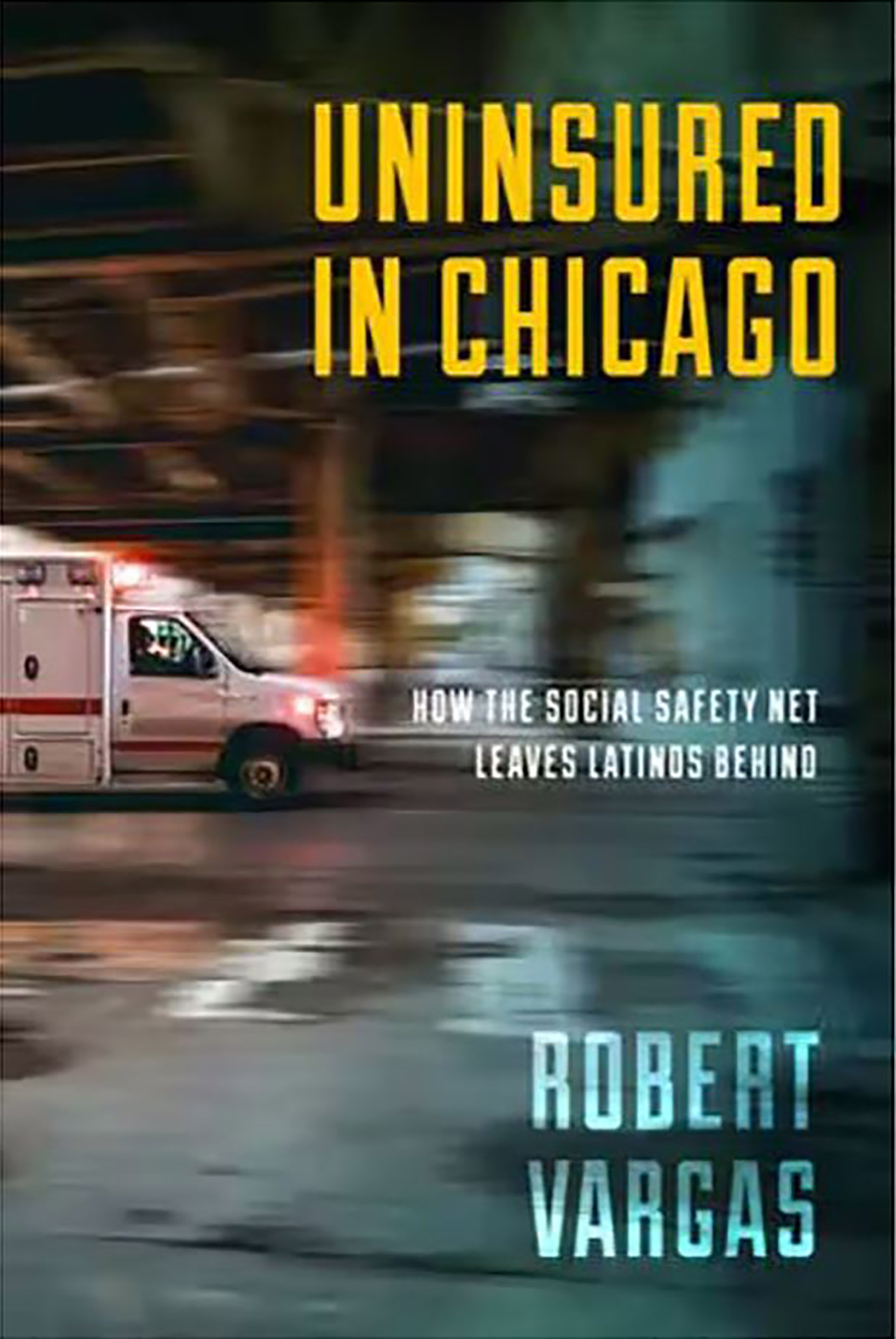 Nick’s asthma made him sound like a broken ventilator. It struck as we drove south on Pulaski Road, crossing over Chicago’s sanitary and ship canal on our way to a movie theater. With the downtown skyline visible in the distance, I asked Nick, in the passenger seat, “When you breathe like that, what are you feeling?”

Catching his breath, Nick panted, “Like I’m breathing through a straw.”

Nick pulled a green inhaler from his pocket, gave it a good shake, and inhaled a puff. His crackled breathing only slightly subsided. The inhalers he purchased out of pocket from a neighborhood drug dealer for $20 were losing effectiveness. We ditched our movie plans because Nick feared the heavily air‐conditioned theater would worsen his asthma and, instead, ate lunch at a buffet in Chinatown. Nick walked gingerly from the parking lot to the restaurant.

Uninsured and 28 years old, Nick had contracted asthma in his early 20s. When his first asthma

Nick couldn’t really turn to family for help. The youngest of three kids, Nick was largely raised by his older sister after their young Mexican American parents divorced. Their mother left the family and remarried. Their father died of cancer in 2011. And Nick’s brother, a Latin King gang member, was serving a 20‐year prison sentence. Now, only his older sister, Stacy, and his girlfriend, Karen, were in his life.

Living with asthma and without inhalers made it difficult for Nick to hold down a job. He finished high school but never attended college, and he tended to hop from job to job—he’d worked for Amtrak, at an air‐conditioning repair company, and as an usher at the United Center where the Chicago Bulls and Blackhawks play. Developing asthma and suffering its oxygen deprivation slowed his body and mind, making Nick late to work or unable to complete basic tasks. He’d get fired after one too many screwups and then go look for another sure to be temporary job.

Employed or unemployed, Nick was uninsured, and he needed inhalers. The prospect of dying from an asthma attack haunted him. A friend referred him to a neighborhood drug dealer, and when he had cash, Nick bought the inhalers that way. When he didn’t have cash, his asthma attacks sent him, begrudgingly, to the nearest hospital emergency room where he could receive care but go further into debt.