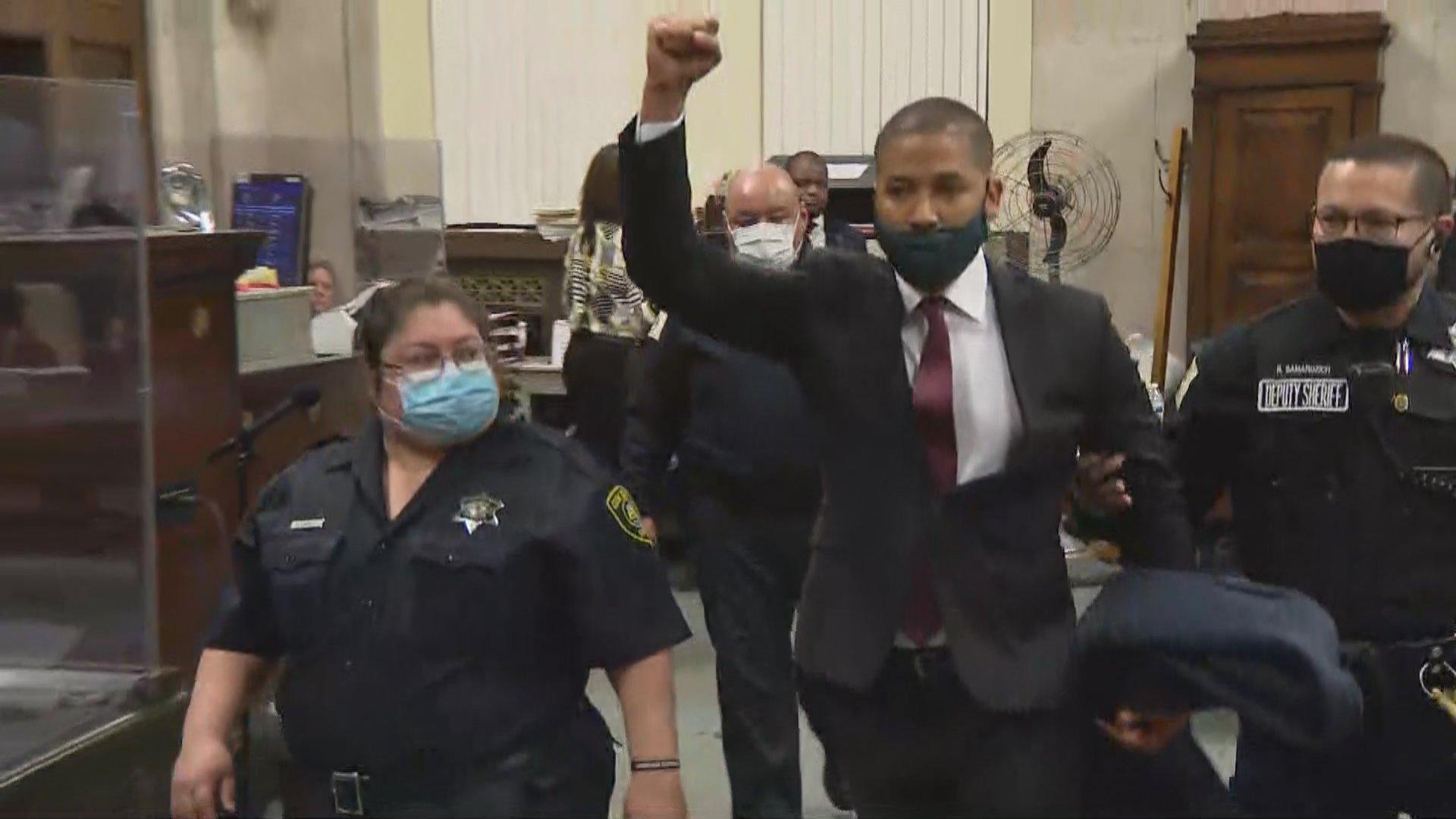 Jussie Smollett raises his hand while proclaiming his innocence as he is taken out of the courtroom at the Leighton Criminal Court Building to begin his 150-day jail sentence on March 10, 2022. (WTTW News)

CHICAGO (AP) — Jussie Smollett was ordered released from jail Wednesday by an appeals court that agreed with his lawyers that he should be released pending the appeal of his conviction for lying to police about a racist and homophobic attack.

The ruling came after a Cook County judge sentenced Smollett last week to immediately begin serving 150 days in jail for his conviction on five felony counts of disorderly conduct for lying to police. The appeals court said Smollett could be released on a personal recognizance bond of $150,000, meaning he does not need to post any money to be released.

“We are very happy with the ruling made by the Illinois District Appellate Court," lead defense attorney Nenye Uche said in a statement. "We are pleased that sensationalism and politics will be put aside and we can finally have an intellectual discussion about our laws with our esteemed appellate court.”

Uche argued in an emergency motion that Smollett could face “irreparable harm” by serving out the full 150 days in jail before his appeal process can be completed.

In a one page order published Wednesday, the court agreed, noting that it would be “unable to dispose of the instant appeal before the defendant would have served his entire sentence of incarceration.”

In his motion, Uche also highlighted the dangers of COVID-19 to jail detainees and claimed his client could face “extraordinary damage” to his mental health if he is held alone in protective custody.

Earlier this week, the Cook County Sheriff’s Office said Smollett was being held in a location “frequently utilized for individuals requiring a high level of supervision and care for mental health needs,” but also added that “Mr. Smollett is not currently on suicide watch.”

Smollett had an outburst in court after his sentence was read last week, shouting repeatedly that he was not suicidal.

The court’s decision marks the latest chapter in a strange story that began in January 2019 when Smollett, who is Black and gay, reported to Chicago police that he was the victim of a racist and homophobic attack by two men wearing ski masks. The manhunt for the attackers soon turned into an investigation of Smollett himself and his arrest on charges that he’d orchestrated the attack and lied to police about it.

The investigation revealed Smollett paid two men he knew from work on the TV show “Empire” to stage the attack.

A jury convicted Smollett in December on five felony counts of disorderly conduct — the charge filed when a person lies to police. He was acquitted on a sixth count. Judge James Linn sentenced Smollett last week to 150 days in jail, but with good behavior he can be released in as little as 75 days.

Smollett maintained his innocence during the trial. As of Wednesday evening, it appeared he was still in custody at the jail.