On March 2, former Illinois House Speaker Michael Madigan was charged with 22 federal counts, alleging multiple instances of leveraging his powerful position to enrich himself and his allies.

It’s a dramatic capstone to a more than 50-year career described as both “legendary” and “corrupt,” depending on who you talk to.

Chicago Tribune investigative reporter Ray Long began covering the statehouse at the beginning of Madigan’s historic reign as speaker of the House, and has unique insight into how he operated. 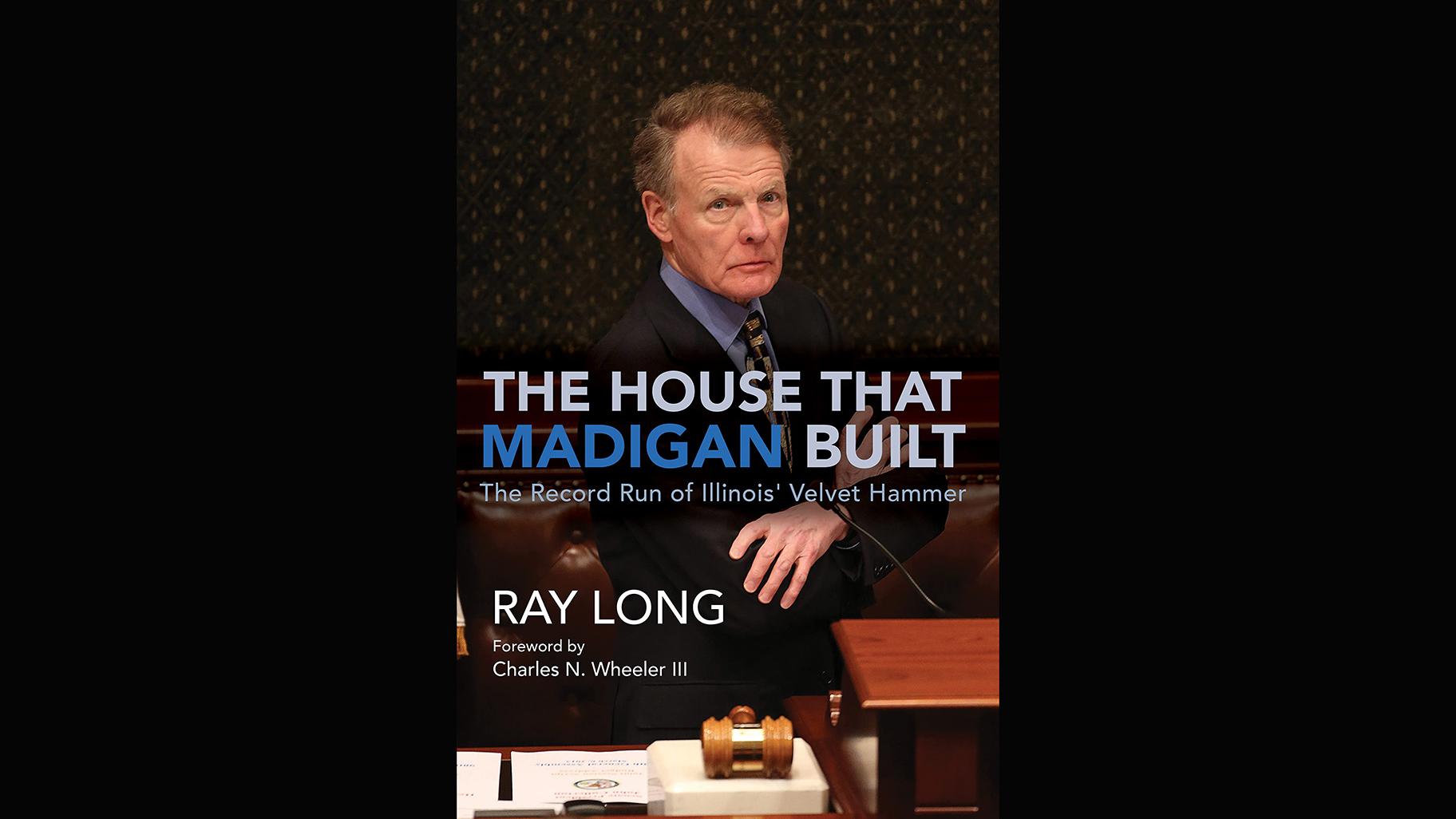 “The House that Madigan Built: The Record Run of Illinois’ Velvet Hammer” by Ray Long. (University of Illinois Press)

What does the speaker think?

At the Illinois Capitol, the question loomed over every major issue. The question came in over the phone, got whispered in the hallway, popped up at a committee hearing and rolled out in a press conference. It is a simple query, of course, expected to be asked in statehouses all across America. In Illinois, though, the answer carried far greater weight. For in Illinois politics, the speaker’s moves at the end of the 20th century and the beginning of the 21st provided a road map for how Illinois got to where we are today. Have you talked to the speaker about your legislation? Can you get your bill through the House? What’s he going to do next? What does he want?

These questions dominated internal debate in Springfield, be it on guns, pensions, education, gay rights or taxes — before a vote was contemplated, let alone taken. They were asked time after time — by Democrats and Republicans, ranking lawmakers and rookies, lobbyists, labor and business leaders, reporters and editors, generations of governors and, yes, mayors of Chicago.

All wanted to know the positions of the secretive man who did more to shape Illinois politics, government and laws than anyone in the last half century: House Speaker Michael Joseph Madigan, chairman of the Democratic Party of Illinois, committeeman of Chicago’s 13th Ward, lifelong resident of the city’s Southwest Side. Wielding the gavel for all but two years from 1983 to early 2021, making him the nation’s longest-serving speaker, Madigan built the House where he ruled. But in a larger sense, he built the house Illinoisans live in. What the speaker thought became more than an academic question. The answer gave the best clues for politicians who wondered which ideas would succeed or suffocate.

Lori Lightfoot recognized that dynamic even before she took the oath of office as Chicago’s mayor in 2019. After meeting with rookie Democratic Gov. J.B. Pritzker, she went to the speaker’s Capitol suite and addressed the House. When she emerged from Madigan’s office, Lightfoot offered no apologies to her far-left critics long tired of the speaker’s Springfield reign. She gave a carefully worded comment to reporters eager to hear what went down between the incoming Democratic mayor — the Black, openly gay, progressive, former federal prosecutor — and the all-powerful speaker — a straight, white Democrat schooled in Irish, ward-style politics a half-century earlier by Mayor Richard J. Daley, the party boss who perfected the Chicago machine. “The speaker occupies an important space in state government,” Lightfoot said. “We’re not going to be aligned on every issue, but he’s an important person to the city of Chicago.”

Understated, to be sure, Lightfoot’s neutral remarks nodded to the clear political and practical realities: Loved, revered, hated or feared, Madigan commanded an outsized role. It all played into the Madigan Mystique — which still exists somewhere between real and perceived power. Whether one viewed Madigan as a genius, a jerk or both — and plenty of people populated each camp — he managed consistently to mesmerize his admirers and frustrate his foes. Madigan’s political opponents found themselves beaten down so often by his persistent but subtle force that he became known early on as “The Velvet Hammer.” He underscored the nickname when he first lifted the wooden gavel as speaker in 1983 and called the House to order.

Instead of the hammerlike slams that his Republican predecessor, George Ryan, often used to quiet the chamber, Madigan held the mallet end of the gavel and tapped the handle lightly. To the astonishment of lawmakers, the House went silent. Madigan grinned. “This is a new era,” he said.

Madigan long wanted to be a powerful leader, much in the form of his mentor, the first Mayor Daley. “The person that finds themselves as a leader in the legislature is pretty much in the position to shape exactly how they wish to perform their job. They can be strong or they can be weak. Active or passive. In my case, I decided years ago that I wanted to be a strong legislative leader, an active legislative leader,” Madigan once said. “I would hope that, acting from a position of strength, that I do good things, not bad things. I would hope.”

Over the years, he has been seen as conservative, moderate and liberal — depending on the time and the topic. A social conservative early on that fit with his Catholic upbringing, the speaker opened up as the members in his caucus pushed to lead a chamber that voted for same-sex marriage, an expansion of abortion rights and a ban on the death penalty. Once representing a heavily white enclave on the Southwest Side, he still racked up big wins when the population tilted Hispanic. He fought to scale back public pension benefits for public employees, but then labor rallied around him when he rebuffed aggressive efforts to roll back union rights. That could be why he shunned labels. “I always classified myself as a Democrat,” Madigan told radio reporters following the 2016 Democratic Convention. “I don’t use an adjective when I describe my political party. I’m a Democrat.”

Extremely deliberative, Madigan usually knew how to make a course correction when he misread political winds. Madigan lost the Illinois speakership in the 1994 nationwide Republican tide that empowered U.S. Rep. Newt Gingrich to take over the U.S. House. But Madigan built a political team that — despite running in districts gerrymandered to favor Republicans — took back the Illinois House two years later. He once took a political potshot at a rising Democratic star named Barack Obama by deriding him as “The Messiah.” But then Madigan gave Obama’s presidential campaign a lift by moving up the Illinois primary to help Obama’s race for the Democratic nomination. Madigan sparred repeatedly with Democratic Gov. Rod Blagojevich — then backed him for reelection in 2006. But the speaker launched impeachment proceedings two years later when the FBI took Blagojevich away in handcuffs. Madigan acted quickly in 2018 to quell calls for him to step down from his state and political posts over the way he handled accusations of sexual harassment and abusive behavior among his top aides. But concern among a diverse caucus that had more women than men lingered.

Odd as it seemed for a big state like Illinois, where governors have enormous power and a sizable bully pulpit, Madigan stayed in control for decades. A frustrated Republican Gov. Bruce Rauner, who repeatedly tried and failed to outmaneuver Madigan, blurted out during his unsuccessful 2018 reelection campaign: “I’m not in charge. I’m trying to get to be in charge.” No one in Springfield wondered what Rauner meant. In November 2018, Democrat J.B. Pritzker beat Rauner in the race for governor. And Madigan? The speaker won the largest number of House Democrats he’s ever controlled — a 74-44 supermajority. With their large Democratic majorities, Madigan and Senate President John Cullerton sent Pritzker a massive expansion of casino gambling, including the long-sought palace for Chicago, sports betting and recreational marijuana and a $45 billion pork-barrel bonanza. Madigan called the first few months of 2019 “an extraordinarily productive session of the General Assembly. Simply historic.”

In Chicago, though, a different kind of history was being written. Just over two weeks before lawmakers adjourned, the FBI quietly raided the homes of three longtime Madigan associates — including a former Commonwealth Edison lobbyist, Michael McClain, one of the speaker’s closest confidants. Before year’s end, the Tribune reported that federal authorities had tapped McClain’s phone and had begun asking questions about Madigan and his allies. In the summer of 2020, prosecutors put the spotlight directly on Madigan, tying him to ComEd’s “yearslong bribery scheme” of giving jobs, contracts and payments to a roster of Madigan’s political allies in hopes of winning favorable treatment for the utility’s legislative agenda. ComEd agreed to pay a $200 million fine and vowed to cooperate in a deferred prosecution agreement. Madigan was not charged and emphatically denied wrongdoing, but prosecutors implicated the speaker and tagged him with an ignominious moniker: “Public Official A.”

The fallout left him politically vulnerable, which played roles in the loss of an Illinois Supreme Court candidate and Pritzker’s push for an income tax hike on the highest wage earners. Prosecutors then delivered more uncomfortable postelection news: McClain was indicted with a top former ComEd executive and two other lobbyists. Despite the serious questions swirling around him, Madigan still remained positioned to take the long view. Getting Pritzker in the governor’s chair ensured a Democrat would be in place to sign a new legislative map, the most critical component of determining which party would control the General Assembly for the next decade. But instead of seeing Madigan as an invincible powerhouse, a bloc of 19 mostly female Democrats viewed him as a political liability and refused to support him.

And then the once-unthinkable happened: He lost the speakership. Democratic Rep. Emanuel “Chris” Welch of Hillside, a Madigan ally, put together the votes and became Illinois’ first ever Black speaker. Almost 40 years to the day that he first became a legislative leader, Michael J. Madigan ended his record reign. And the ComEd investigation still lingers.