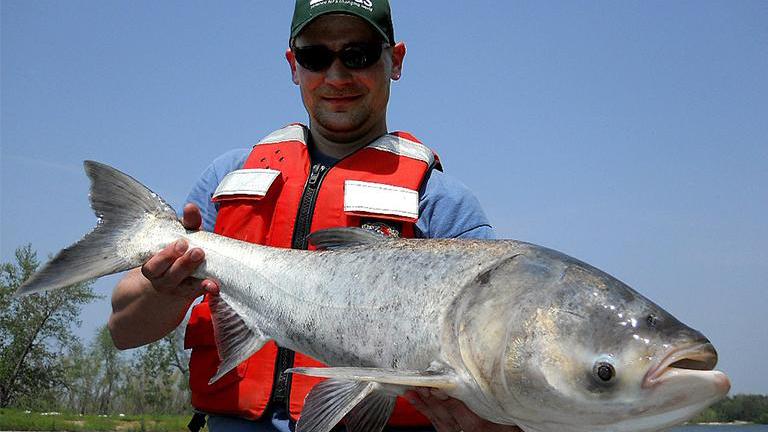 A bighead carp, a type of Asian carp, caught in the Illinois River, the principal tributary of the Mississippi River. There are no North American fish large enough to eat Asian carp, according to the Asian Carp Regional Coordinating Committee. (Courtesy U.S. Geological Survey)

Flush with $17 billion in supplemental funding from the recently passed Infrastructure Investment and Jobs Act, the U.S. Army Corps of Engineers announced Wednesday the slate of projects it can now tackle due to the infusion of cash, and the Chicago region is reaping the benefits.

Among the big ticket items in the Corps’ 2022 civil works budget: $225.8 million to complete the planning and engineering phase of the Brandon Road Lock and Dam invasive carp barrier. The Corps’ allocation also covers the start of construction on the barrier.

Michigan and Illinois have chipped in some funding for the barrier’s planning and engineering but as recently as December 2021, a coalition of Great Lakes governors, including J.B. Pritzker, signed onto a letter stating they were tapped out and needed the federal government to step up to the plate.

The Corps’ announcement was lauded by Illinois elected officials and organizations including Friends of the Chicago River.

“Early carp eradication schemes sacrificed the river system for the Great Lakes, but this funding protects all our water resources from the serious ecological threat posed by invasive carp,” Margaret Frisbie, executive director of Friends of the Chicago River, said in a statement. “Getting the next phase of the project moving shows we can all work collaboratively — across the aisle — to achieve important environmental work.”

Also tucked into the Corps’ 2022 budget is $1.5 million for a reevaluation report needed to assess Chicago shoreline protections. Significant storm damage suffered along the lakefront in 2020 prompted officials to ask the Corps to revisit existing protections and investigate expanding them in light of climate change.

The Corps of Engineers had an estimated $100 billion construction backlog, on top of authorized but unfunded investigations, according to the Congressional Research Service.

“The Army will work with community partners to leverage these historic civil works funds,” Michael Connor, assistant secretary of the army for civil works, said of the new resources provided by the infrastructure bill.