COVID Variant Spreads to More Countries as World on Alert 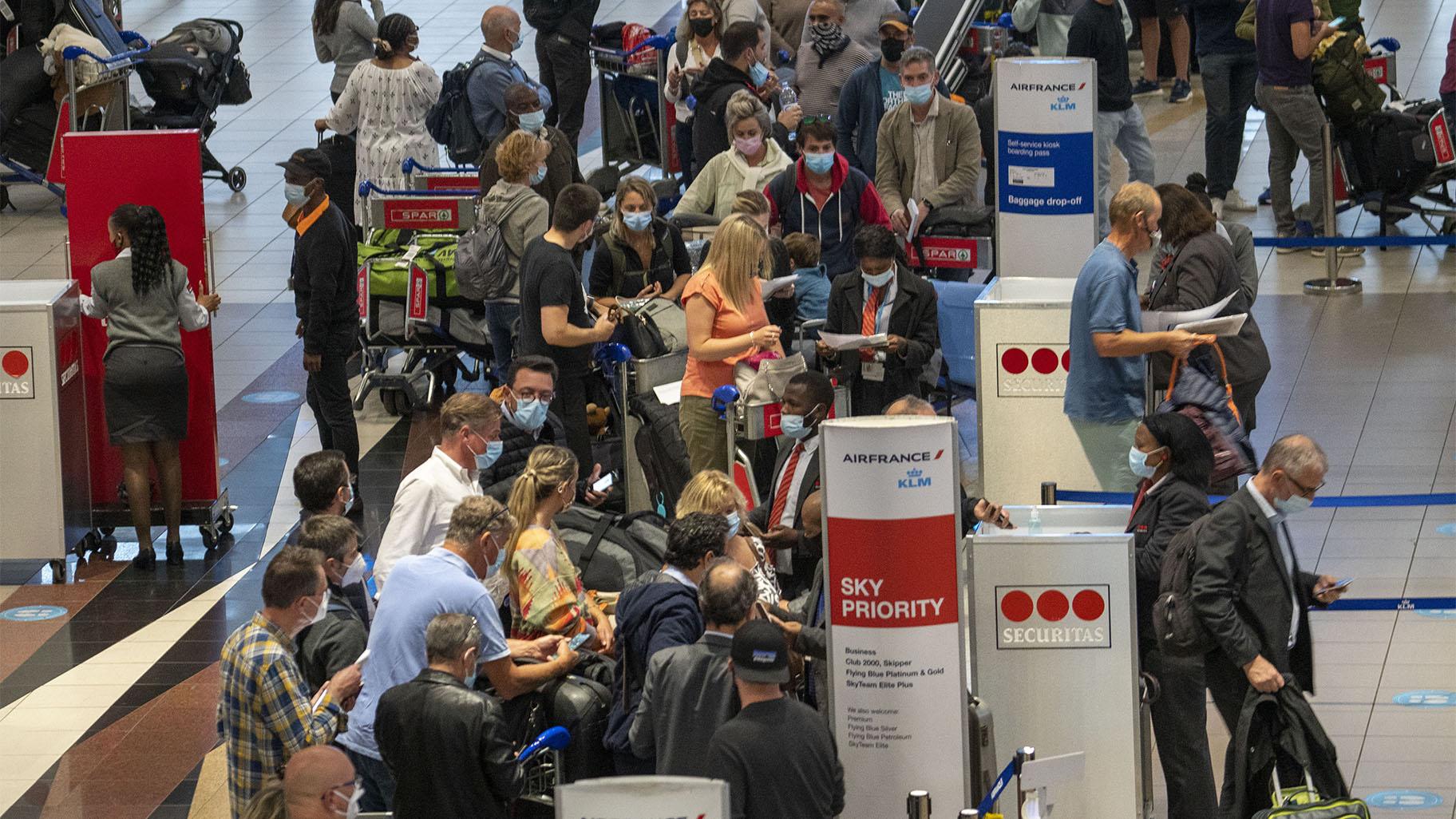 People queue to get on the Air France flight to Paris at OR Tambo's airport in Johannesburg, South Africa, Nov. 26, 2021. (AP Photo / Jerome Delay, File)

The new potentially more contagious omicron variant of the coronavirus popped up in more European countries on Saturday, just days after being identified in South Africa, leaving governments around the world scrambling to stop the spread.

The U.K. on Saturday tightened its rules on mask-wearing and on testing of international arrivals after finding two cases. New cases were confirmed Saturday in Germany and Italy, with Belgium, Israel and Hong Kong also reporting that the variant has been found in travelers.

In the U.S., Dr. Anthony Fauci, the government’s top infectious diseases expert, said he would not be surprised if the omicron variant was already in the United States, too.

“We have not detected it yet, but when you have a virus that is showing this degree of transmissibility ... it almost invariably is ultimately going to go essentially all over,” Fauci said on NBC television.

Because of fears that the new variant has the potential to be more resistant to the protection offered by vaccines, there are growing concerns around the world that the pandemic and associated lockdown restrictions will persist for far longer than hoped.

Nearly two years since the start of the pandemic that has claimed more than 5 million lives around the world, countries are on high alert. Many have already imposed travel restrictions on flights from southern Africa as they seek to buy time to assess whether the omicron variant is more transmissible than the current dominant delta variant.

In Britain, Prime Minister Boris Johnson said it was necessary to take “targeted and precautionary measures” after two people tested positive for the new variant in England.

“Right now this is the responsible course of action to slow down the seeding and the spread of this new variant and to maximize our defenses,” he told a news conference.

Among the measures announced, Johnson said anyone arriving in England must take a PCR test for COVID-19 on the second day after their arrival and self-isolate until they provide a negative test. And if someone tests positive for the omicron variant, then he said their close contacts will have to self-isolate for 10 days regardless of their vaccination status — currently close contacts are exempt from quarantine rules if they are fully vaccinated.

He also said mask-wearing in shops and on public transport will be required and said the independent group of scientists that advises the British government on the rollout of coronavirus vaccines has been asked to accelerate the vaccination program. This could involve widening the booster program to younger age groups, reducing the time period between a second dose and a booster and allowing older children to get a second dose.

“From today we’re going to boost the booster campaign,” he said.

Britain’s Department of Health said the two cases found in the U.K. were linked and involved travel from southern Africa. One of the two new cases was in the southeastern English town of Brentwood, while the other was in the central city of Nottingham. The two confirmed cases are self-isolating with their households while contact tracing and targeted testing takes place.

The British government also added four more countries — Angola, Malawi, Mozambique and Zambia — onto the country’s travel red list from Sunday. Six others — Botswana, Eswatini (formerly Swaziland), Lesotho, Namibia, South Africa and Zimbabwe — were added Friday. That means anyone permitted to arrive from those destinations will have to quarantine.

Many countries have slapped restrictions on various southern African countries over the past couple of days, including Australia, Brazil, Canada, the European Union, Iran, Japan, New Zealand, Thailand and the United States, in response to warnings over the transmissibility of the new variant. This goes against the advice of the World Health Organization, which has warned against any overreaction before the variant was thoroughly studied.

Despite the banning of flights, there are mounting concerns that the variant has already been widely seeded around the world.

Italy and Germany were the latest to report confirmed cases of the omicron variant.

An Italian who had traveled to Mozambique on business landed in Rome on Nov. 11 and returned to his home near Naples. He and five family members, including two school-age children, have since tested positive, the Italian news agency LaPresse said. All are isolating in the Naples suburb of Caserta in good condition with light symptoms.

The variant was confirmed by Sacco hospital in Milan, and Italy’s National Health Institute said the man had received two doses of the vaccine. Italy’s health ministry is urging all regions to increase its tracing of the virus and sequencing to detect cases of the new variant first identified in South Africa.

In Germany, the Max von Pettenkofer Institute, a Munich-based microbiology center, said the omicron variant was confirmed in two travelers who arrived on a flight from South Africa on Nov. 24. The head of the institute, Oliver Keppler, said that genome sequencing has yet to be completed, but it is “proven without doubt that it is this variant,” German news agency dpa reported.

The Dutch public health institute said the omicron variant was “probably found in a number of the tested persons” who were isolated after arriving Friday in Amsterdam on two flights from South Africa. The institute said in a statement that further sequencing analysis is underway to determine for sure that it is the new variant. The results were expected Sunday. A total of 61 people were tested.

Israel said it detected the new strain in a traveler who had returned from Malawi and was tracing 800 travelers who returned recently from southern African countries. And Australia said early Sunday its scientists were working to determine whether two people who tested positive for COVID after arriving from southern Africa are infected with the omicron variant.

The variant’s swift spread among young people in South Africa has alarmed health professionals even though there was no immediate indication whether the variant causes more severe disease.

A number of pharmaceutical firms, including AstraZeneca, Moderna, Novavax and Pfizer, said they have plans in place to adapt their vaccines in light of the emergence of omicron. Pfizer and its partner BioNTech said they expect to be able to tweak their vaccine in around 100 days.

Professor Andrew Pollard, the director of the Oxford Vaccine Group, which developed the AstraZeneca vaccine, expressed cautious optimism that existing vaccines could be effective at preventing serious disease from the omicron variant, noting that most of the mutations appear to be in similar regions as those in other variants.

“At least from a speculative point of view we have some optimism that the vaccine should still work against a new variant for serious disease, but really we need to wait several weeks to have that confirmed,” he told BBC radio.

Some experts said the variant’s emergence illustrated how rich countries’ hoarding of vaccines threatens to prolong the pandemic.

Fewer than 6% of people in Africa have been fully immunized against COVID-19, and millions of health workers and vulnerable populations have yet to receive a single dose. Those conditions can speed up spread of the virus, offering more opportunities for it to evolve into a dangerous variant.

“One of the key factors to emergence of variants may well be low vaccination rates in parts of the world, and the WHO warning that none of us is safe until all of us are safe and should be heeded,” said Peter Openshaw, a professor of experimental medicine at Imperial College London.

U.S. Secretary of State Antony Blinken spoke Saturday with his South African counterpart, Naledi Pandor, and they stressed the importance of working together to help African nations vaccinate their populations, the State Department said in a statement. It said Blinken praised South Africa’s scientists for quickly identifying the omicron variant and the government for its transparency in sharing this information, “which should serve as a model for the world.”