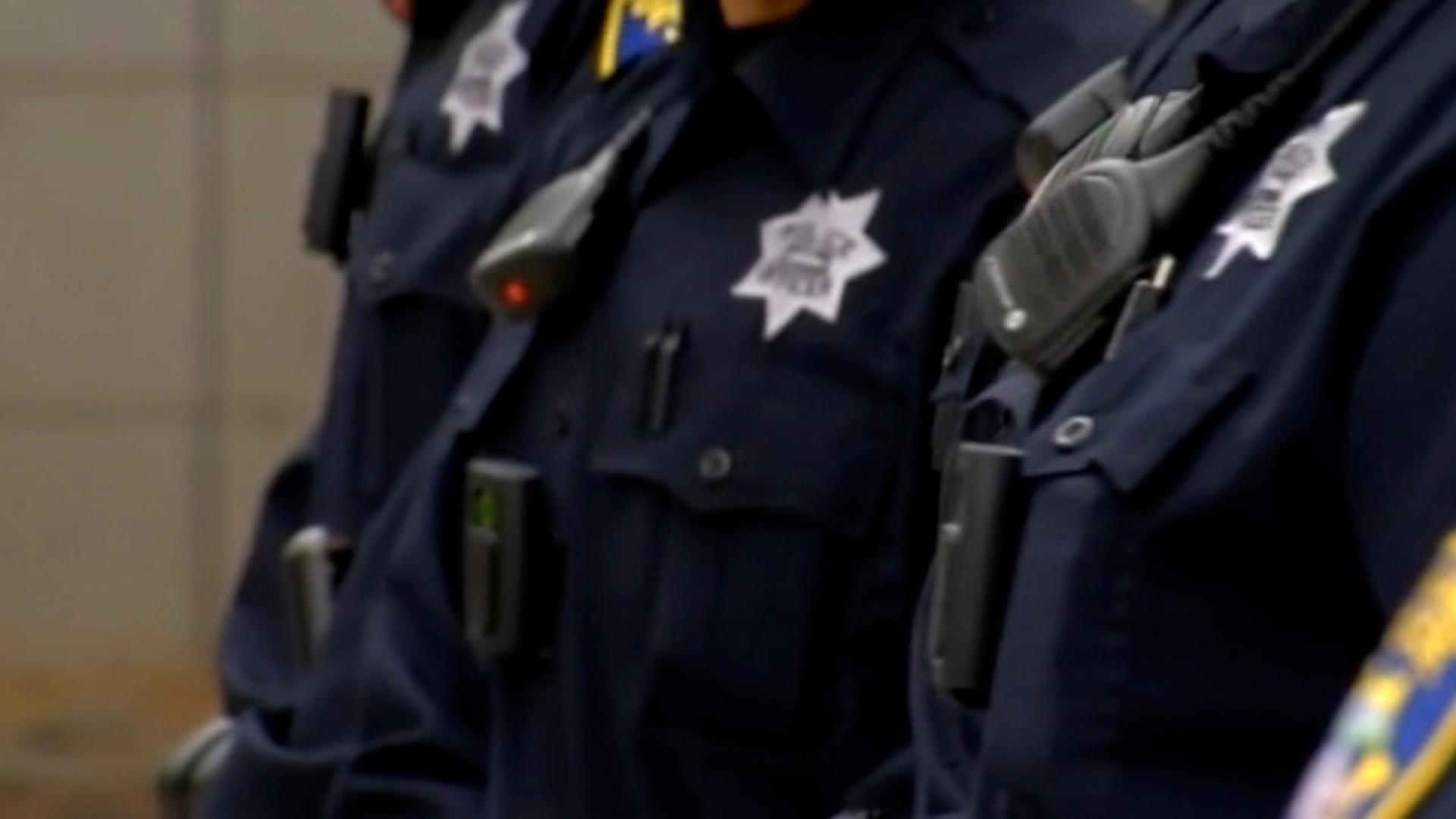 The coronavirus has become the leading cause of death for officers despite law enforcement being among the first groups eligible to receive the vaccine at the end of 2020. (Credit: KGO)

(CNN) -- Jessica Desfosses shared the final heartrending text messages she exchanged with her police officer husband in the days before he died from COVID-19.

“Commercial just came on tv a casket saying take Covid seriously... 0 consideration for those of us fighting for every breath,” Stephen Desfosses wrote in a series of exchanges that began last Christmas Eve as his condition steadily deteriorated in a Massachusetts hospital.

“Your husband is going to [be] changed forever no matter what happens...my life has flashed before my eyes and man it’s scary,” he wrote in another message, which his wife posted to Facebook last summer.

Detective Sgt. Stephen Desfosses, 52, a veteran of more than 30 years with the Norton Police Department, died on Jan. 13. He was one of at least 231 officers who died of COVID-19 this year, according to the Officer Down Memorial Page (ODMP).

The coronavirus has become the leading cause of death for officers despite law enforcement being among the first groups eligible to receive the vaccine at the end of 2020. The total stands at 476 COVID-19 related deaths since the start of the pandemic, compared to 94 from gunfire in the same period.

Her appeal comes as law enforcement officers and their unions across the country have resisted vaccine mandates despite the delta variant-fueled resurgence of COVID-19 and effectiveness of the shots in preventing severe cases and death.

Reasons cited for the vaccine resistance among law enforcement officers range from disinformation to distrust in the science of the vaccines.

The debate mirrors growing tension nationally between unions and employers as cities and businesses seek to enforce vaccine mandates.

“You’re not drafted into this job. This is something you volunteer for,” said Charles Ramsey, a former Washington, D.C. police chief and CNN law enforcement analyst. “You understand when you take the job it’s going to require some sacrifice on your part in a lot of different ways.”

In Chicago, up to half the rank-and-file officers in the nation’s second largest police department face being placed on unpaid leave as their union and Mayor Lori Lightfoot clash over a city requirement that officers disclose their vaccine status.

Lightfoot on Friday accused police union president John Catanzara of trying to “induce an insurrection” by telling officers to ignore a deadline to report vaccine status.

The city filed a complaint alleging the union was “encouraging a work stoppage or strike.” A Cook County Circuit judge ruled Friday night that Catanzara should not make public statements encouraging members to not comply with the vaccination policy.

Catanzara “has never engaged in, supported, or encouraged a work stoppage,” according to a union statement on Friday.

Chicago officers had a deadline of midnight Thursday to disclose their vaccine status or be placed on unpaid leave, Catanzara said earlier this week.

Lightfoot said the city would take the weekend to check with officers who haven’t complied. She said officers should report for duty until they’re told by supervisors that they’ve been placed on leave.

In Miami, officers are resisting a vaccine mandate. In Pittsburgh, the police chief sent out emails encouraging officers to protect themselves as the delta variant sent COVID-19 cases soaring.

The Seattle mayor’s office said nearly 140 officers were unvaccinated or hadn’t sought an exemption. Huserik said about 320 officers had already left the force since the beginning of 2020.

Seattle could begin the process of separating officers from the department after the deadline, according to Mike Solan, police union president.

“If we lose what appears to be over 300 people because of this mandate, this public safety crisis we’re experiencing will look like child’s play,” Solan said.

Across the U.S., law enforcement leaders have pleaded with officers who remain hesitant to get the shot. Still, many unions and their member officers continue to push back.

“It’s a right to obviously get vaccinated. It’s an individual right and I firmly still believe in that,” said Dan Yancey, chief of the Owasso Police Department in Oklahoma. “But I would certainly encourage people to do that.”

In Baker, Louisiana, outside of Baton Rouge, the COVID-19 death last August of Lt. DeMarcus Dunn prompted many colleagues to get vaccinated, according to Police Chief Carl Dunn.

“He lost his father at a very young age and it was a village that raised him,” Chief Dunn said of the officer.

Before the lieutenant’s death on Aug. 13, about 70% of the police force was unvaccinated. Now, 95% of the city’s 40 officers have received the shot, according to the chief.

“The point I try to get across is, this pandemic, it supersedes any kind of political, any kind of beliefs, anything that you have that makes you reluctant to get vaccinated,” Dunn said.

The national police union is encouraging vaccinations but opposes mandates.

Catanzara has framed the issue as a labor dispute.

“We are going to keep fighting this mandate and this dictatorship,” said Catanzara, president of the Chicago Fraternal Order of Police, echoing the sentiments of union leaders around the country.

“We invest quite a bit with the vetting and training these individuals. We don’t want to lose them as friends or lose them because of COVID,” said Chris Loftis, Washington State Patrol spokesman.

Widow gets copies of vaccination cards

Michael Weiskopf, 52, a police officer in St. Petersburg, Florida, died on Aug. 27 after battling Covid-19 for about a month. He was an 18-year law enforcement veteran.

“This was horrible and it did not have to happen,” said his widow, Karen Weiskopf. “He was so strong. He was so healthy... He was my best friend. Perfect husband.”

Karen Weiskopf said she’s vaccinated but her husband was reluctant. She tried several times to convince him.

“He wasn’t sure what was in the vaccine... I felt like Mike did not get vaccinated because he didn’t have all the facts,” she said. “There’s a lot of information just kind of moving around... Science leaves the picture. It just becomes chatter.”

Karen Weiskopf believes her husband’s death served as a warning to other vaccine-reluctant officers.

“To this day I still get letters. I get calls,” she said. “I’ll get copies of people’s vaccination cards in the mailbox that I don’t know.”

Jessica Desfosses wants to turn her unspeakable loss into an opportunity to save lives.

“It’s absolutely as bad as you would imagine to be raising two small girls without their dad,” she said of her late husband, Stephen, who “wanted to be first in line for that vaccine” but never got the chance.

“And if he had had the choice to give himself that extra protection so he could continue to serve the public and still come home to his family, he absolutely would have done it.”