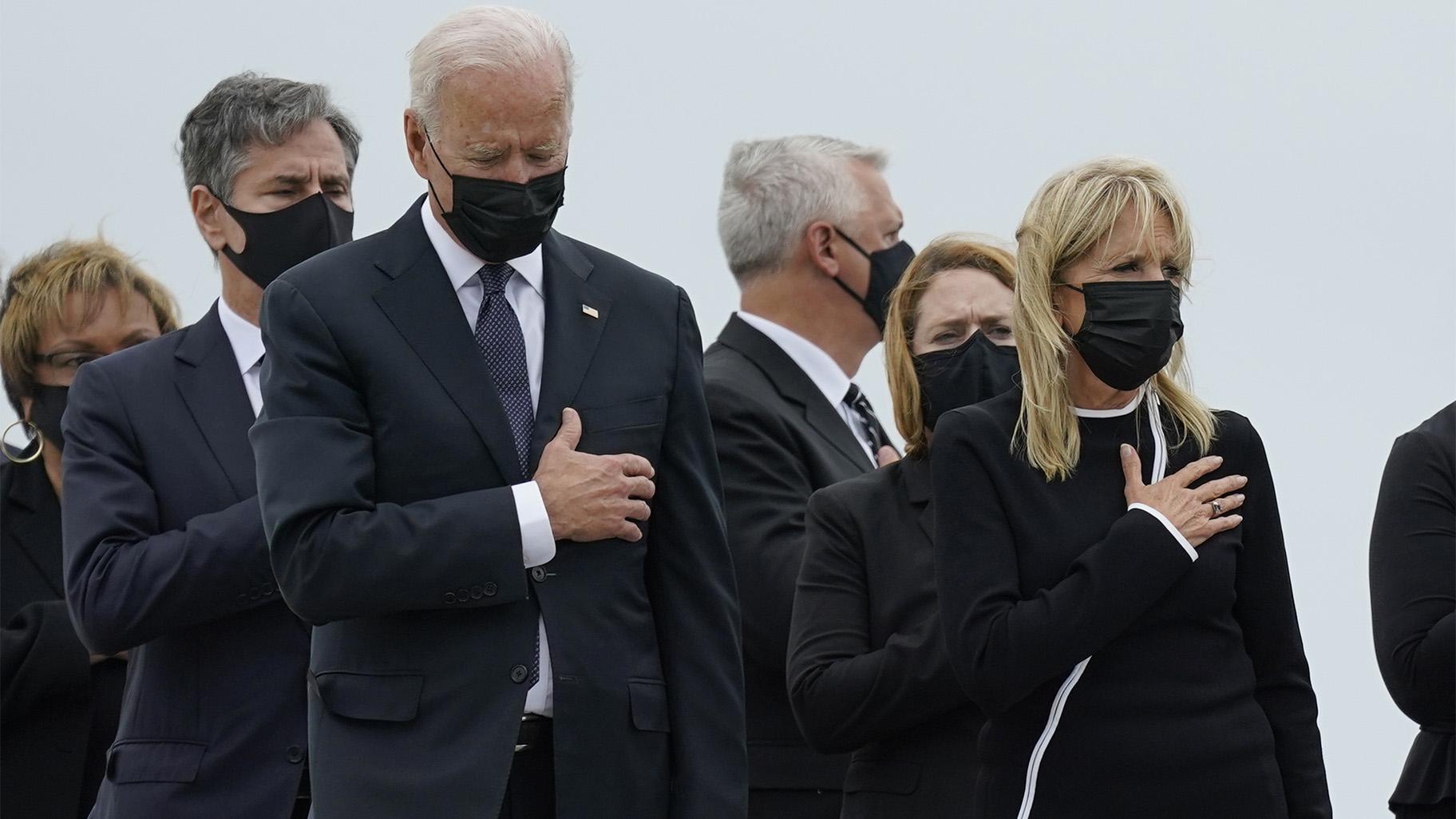 NEW YORK (AP) — He will again make the ritual journey to sacred American landmarks of loss. He will once more bow his head in silent prayer. He will repeat words of comfort for those whose lives changed forever on that brilliant September day two decades ago.

But this time, Joe Biden will hold the rank of commander in chief as he marks the anniversary of the nation’s worst terror attack. Now, he shoulders the responsibility borne by previous presidents to prevent future tragedy, and must do so against fresh fears of a rise in terror after the United States’ exit from the country from which the September 11th attacks were launched.

This 9/11 comes little more than two weeks after a suicide bomber in Kabul killed 13 U.S. service members as the military concluded its withdrawal from Afghanistan. And as Afghanistan returns to Taliban rule, there are fresh concerns that the country could again be a launching pad for attacks that Biden’s government will be charged with preventing.

But for Biden, like his predecessors, the 9/11 anniversary can also present an opportunity to try to reclaim the sense of national unity that followed the attacks, a spirt long since faded amid the country’s divisive politics.

“For Biden, it’s a moment for people to see him not as Democratic president, but as president of the United States of America,” said Robert Gibbs, who served as President Barack Obama’s press secretary.

“The American people are somewhat conflicted about what they have seen out of Afghanistan the last couple of weeks,” Gibbs said. “For Biden, it’s a moment to try to reset some of that. Remind people of what it is to be commander in chief and what it means to be the leader of the country at a moment of such significance.”

The president will commemorate the solemn anniversary on Saturday by paying his respects at the trio of sites where the hijacked planes struck, puncturing the United States’ air of invincibility and resulting in the deaths of 3,000 Americans.

While the ceremonies don’t call for him to make public remarks, Biden released a video Friday to remember those who lost their lives, comfort their families and honor the courage and sacrifice of first responders and servicemembers over the last 20 years. He delivered an impassioned appeal for the nation to set aside its differences and reclaim the spirit of cooperation that sprung up in the days following the attacks.

“Unity is what makes us who we are — America at its best,” Biden said. “To me that’s the central lesson of September 11,” he added. “Unity is our greatest strength.”

First on Saturday for the president will be a stop in New York City, where the twin towers of the World Trade Center were toppled as a horrified world watched on television. Then, a field near Shanksville, Pennsylvania, where a plane fell from the sky after heroic passengers fought terrorists to prevent it from reaching its Washington destination. And finally, the Pentagon, where the world’s mightiest military suffered an unthinkable blow to its very home.

Biden’s task, like his predecessors before him, will be mark the moment with a mix of grief and resolve. A man who has suffered immense personal tragedy, Biden speaks of loss with power and eloquence, and he has repeatedly addressed the grief caused by the COVID-19 pandemic that has claimed more than 600,000 lives across the country.

“We all remember distinctly that day and how much it’s impacted us and has impacted us for the last several decades,” White House press secretary Jen Psaki said this week. “That’s true for him as well.”

Afghanistan will shadow the day.

Osama Bin Laden used that nation to mastermind the 2001 attacks, ushering in an expanded era of terror attacks on soft targets — hotels, office buildings, nightclubs — in cities across the West. Al-Qaeda was routed from Afghanistan in the months after September 11. But other groups have taken up the cause, including the Islamic State group in Afghanistan, believed to be responsible for the Kabul attack last month.

Biden has long argued that the United States’ military mission in Afghanistan was over, that the U.S. needed to stop allowing its soldiers to die there. But for some, the return of the Taliban to power, and the terror threat it could produce, has made the 20th anniversary a bitter and worrisome one.

Biden will be the fourth president to console the nation on the anniversary of that dark day, one that has shaped many of the most consequential domestic and foreign policy decisions made by the chief executives over the past two decades.

The terror attack defined the presidency of George W. Bush, who was reading a book to Florida schoolchildren when the planes slammed into the World Trade Center. He spent that day being kept out of Washington for security reasons — a decision that then-Senator Biden urged him to reconsider, the current president has written — and then delivered a brief, halting speech that night from the White House to a terrified nation.

The following year, Bush chose Ellis Island as the location to deliver his first anniversary address, the Statue of Liberty over his shoulder as he vowed: “What our enemies have begun, we will finish.”

“In the ruins of two towers, under a flag unfurled at the Pentagon, at the funerals of the lost, we have made a sacred promise to ourselves and to the world: We will not relent until justice is done and our nation is secure,” Bush said.

At that time, the nation had been on war footing for months, one conflict raging in Afghanistan and another looming in Iraq. America’s “war on terror” reshaped its citizens’ daily lives and expanded the powers of its government as it sought, at times on shaky legal grounds, to prevent further attacks.

“One year after, it still felt like it was immediately after the attack, the nation was still gripped by its consequences,” said Ari Fleischer, Bush’s press secretary. He said that all presidents must offer messages of “comfort and reassurance” but also strength.

“There are lessons to be learned because there are terrorists who would love to create a September 12th if the U.S. ever lets down its guard,” said Fleischer.

The wars in Iraq and Afghanistan were still deadly when President Barack Obama visited the Pentagon to mark his first September 11th in office in 2009.

“No words can ease the ache of your hearts,” said Obama. “We recall the beauty and meaning of their lives,” he said. “No passage of time, no dark skies can dull the meaning of that moment.”

By the time Obama spoke at the 10th anniversary, bin Laden was dead, killed in a May 2011 Navy Seal raid. Though the nation remained entangled overseas, and vigilant against terror threats, the anniversary became more about healing, as a stunning memorial and soaring skyscrapers rose at Ground Zero, symbols of remembrance and rebirth at what had once been a pile of twisted steel and terrible anguish.

President Donald Trump pledged to get the U.S. out of Afghanistan, but his words during his first September 11th anniversary ceremony in 2017 were a vivid warning to terrorists, telling “these savage killers that there is no dark corner beyond our reach, no sanctuary beyond our grasp, and nowhere to hide anywhere on this very large earth.”

On Saturday, as Biden visits all three sites, Bush will pay his respects in Shanksville while Obama will do the same in New York. Trump, meanwhile, will be delivering ringside commentary at a boxing match at a casino in Hollywood, Florida.