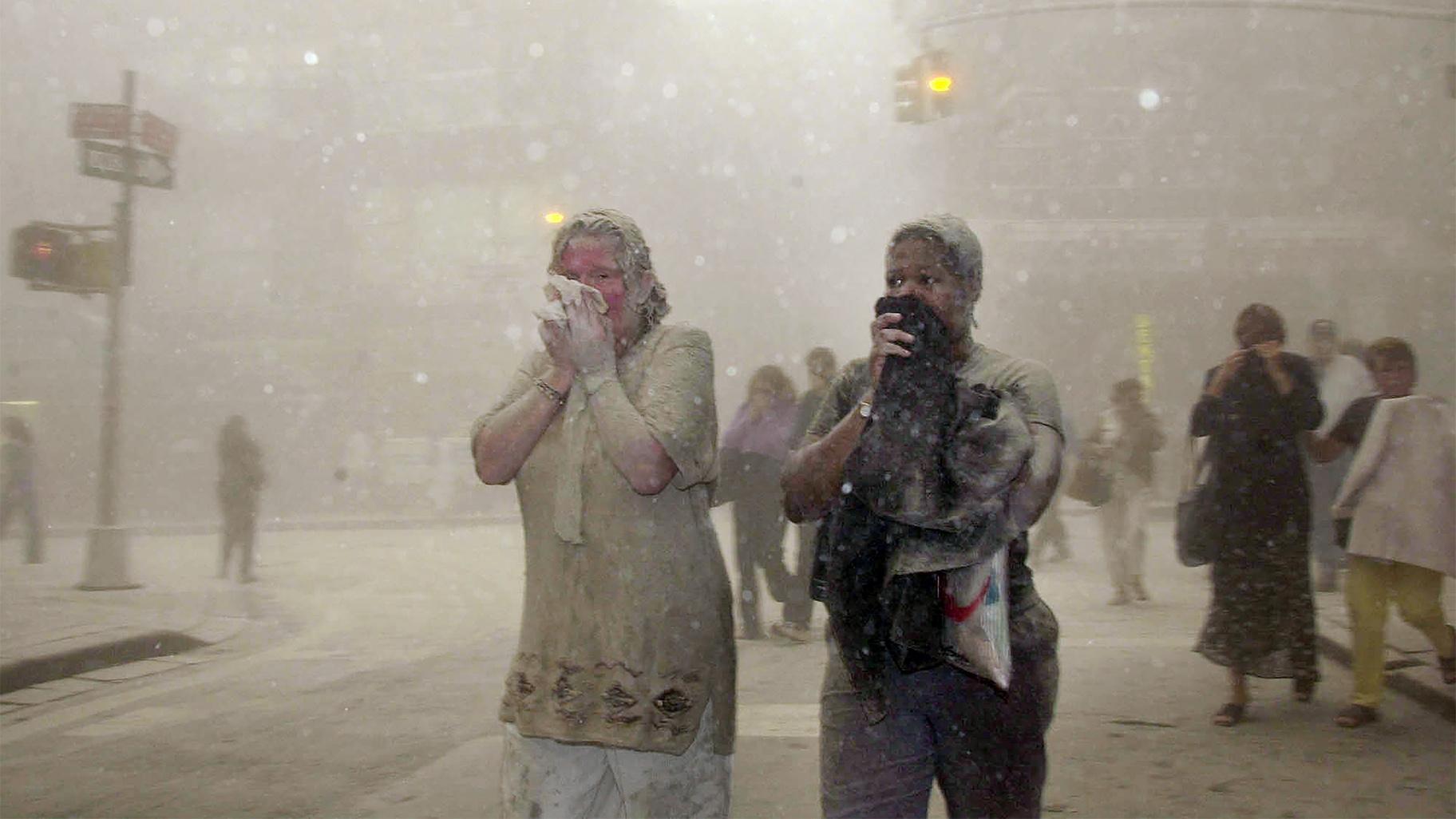 NEW YORK (AP) — The dust cloud caught Carl Sadler near the East River, turning his clothes and hair white as he looked for a way out of Manhattan after escaping from his office at the World Trade Center.

Barbara Burnette, a police detective, spat the soot from her mouth and throat for weeks as she worked on the burning rubble pile without a protective mask.

Today, all three are among more than 111,000 people enrolled in the World Trade Center Health Program, which gives free medical care to people with health problems potentially linked to the dust.

Two decades after the twin towers’ collapse, people are still coming forward to report illnesses that might be related to the attacks.

To date, the U.S. has spent $11.7 billion on care and compensation for those exposed to the dust — about $4.6 billion more than it gave to the families of people killed or injured on Sept. 11, 2001. More than 40,000 people have gotten payments from a government fund for people with illnesses potentially linked to the attacks.

Scientists still can’t say for certain how many people developed health problems as a result of exposure to the tons of pulverized concrete, glass, asbestos, gypsum and God knows what else that fell on Lower Manhattan when the towers fell.

Many people enrolled in the health program have conditions common in the general public, like skin cancer, acid reflux or sleep apnea. In most situations, there is no test that can tell whether someone’s illness is related to the Trade Center dust, or a result of other factors, like smoking, genetics or obesity.

Over the years, that has led to some friction between patients who are absolutely sure they have an illness connected to 9/11, and doctors who have doubts. 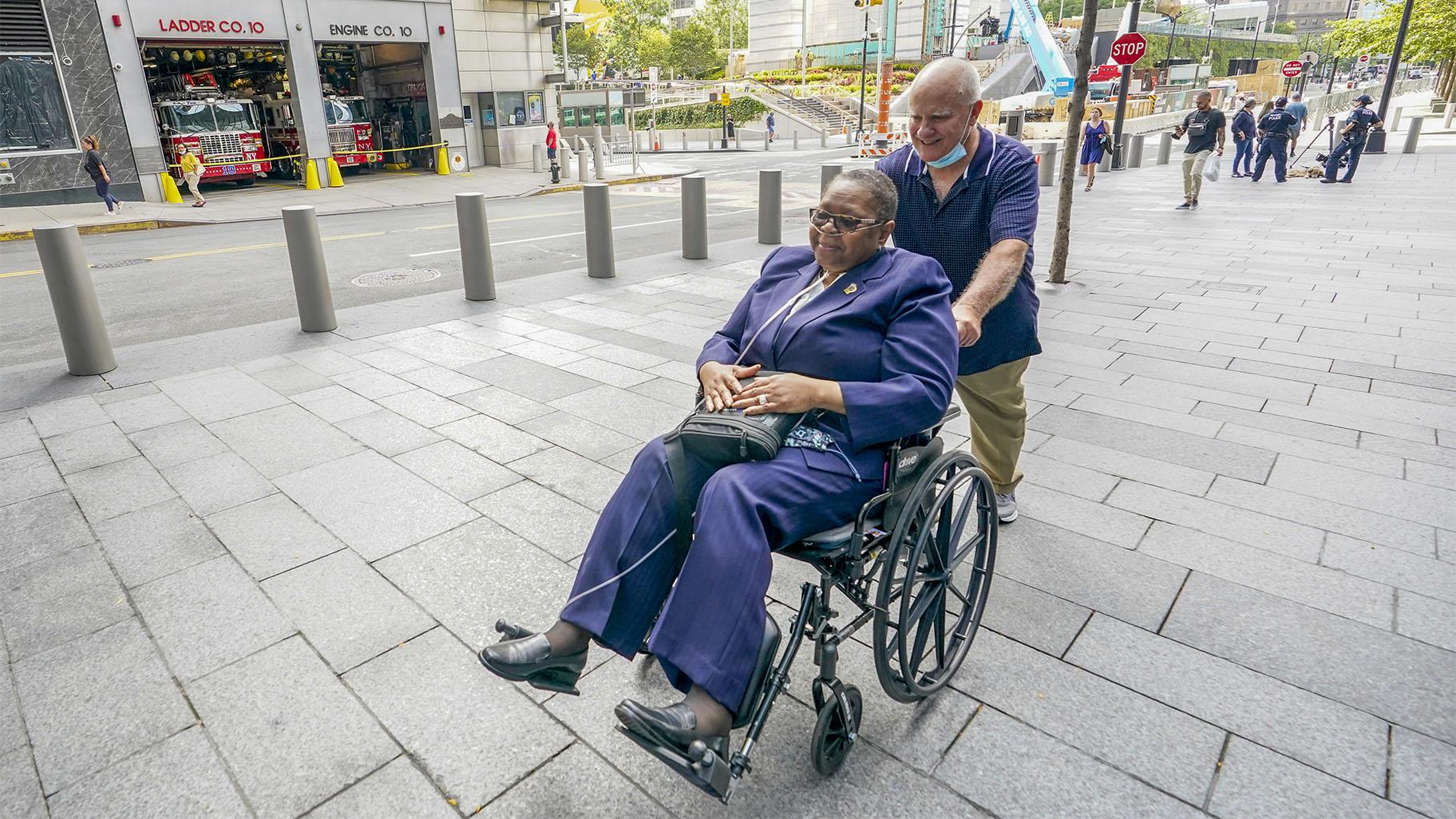 Retired NYPD Detective Barbara Burnette, left, who worked on the World Trade Center pile for 23 days after the terrorist attacks, and her husband Lebro Burnette walk away from the 9/11 Memorial & Museum, Wednesday, Sept. 8, 2021, in New York. (AP Photo / Mary Altaffer)

“Most people thought I was crazy back then,” Mariama James says.

She initially had a hard time persuading doctors that the chronic ear infections, sinus issues and asthma afflicting her children, or her own shortness of breath, had anything to do with the copious amounts of dust she had to clean out of her apartment.

Years of research have produced partial answers about 9/11 health problems like hers. The largest number of people enrolled in the federal health program suffer from chronic inflammation of their sinus or nasal cavities or from reflux disease, a condition that can cause symptoms including heartburn, sore throat and a chronic cough.

The reasons for this are not well understood. Doctors say it could be related to their bodies getting stuck in cycles of chronic inflammation initially triggered by irritation from the dust.

Post-traumatic stress disorder has emerged as one of the most common, persistent health conditions, afflicting about 12,500 people enrolled in the health program. Nearly 19,000 enrollees have a mental health problem believed to be linked to the attacks. More than 4,000 patients have some type of chronic obstructive pulmonary disease, a family of potentially debilitating breathing problems.

Time has helped heal some physical ailments, but not others. Many first responders who developed a chronic cough later had it fade, or disappear entirely, but others have shown little improvement.

About 9% of firefighters exposed to the dust still report a persistent cough, according to Fire Department research. About 22% report experiencing shortness of breath. About 40% still have chronic sinus problems or acid reflux.

Tests on Fire Department personnel who spent time at ground zero found that their lung function declined 10 to 12 times greater than the rate normally expected due to aging in the first year after 9/11.

On the encouraging side, doctors say their worst fears about a possible wave of deadly 9/11 cancers haven’t come true.

Not yet, at least. 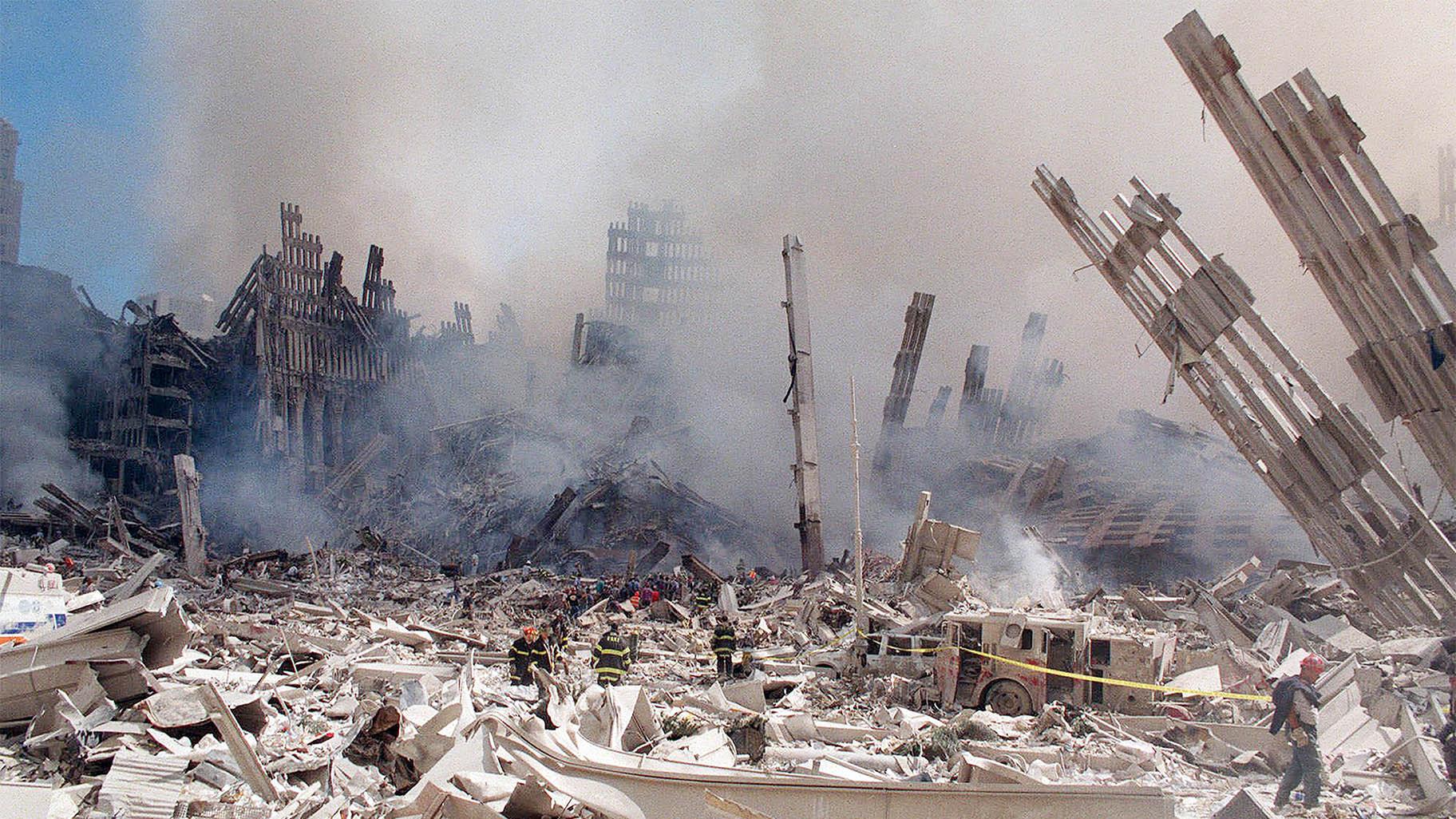 Nearly 24,000 people exposed to trade center dust have gotten cancer over the past two decades. But for the most part, it has been at rates in line with what researchers expect to see in the general public. The largest number have skin cancer, which is commonly caused by sunlight.

Rates of a few specific types of cancer — including malignant melanoma, thyroid cancer and prostate cancer — have been found to be modestly elevated, but researchers say that could be due to more cases being caught in medical monitoring programs.

“We really don’t have the tremendous elevations in cancer I was afraid of,” says Dr. Michael Crane, director of the World Trade Center health clinic at Mount Sinai. “I was terrified that we were going to have epidemic lung cancer.”

One study showed that cancer mortality rates have actually been lower among city firefighters and paramedics exposed to Trade Center dust than for most Americans, possibly because frequent medical screenings caught cancers early.

Beneficiaries of that screening include people like Burnette, who initially started getting treatment at the Mount Sinai clinic for a lung disease — hypersensitivity pneumonitis with fibrosis — that she developed after spending three weeks in the swirling dust at ground zero.

During one of those visits in 2017, a scan wound up detecting lung cancer.

“Had I not been in the program, or not seen Dr. Crane, I don’t know that they would have found it,” Burnette says. Since then she has had two rounds of chemotherapy. It hasn’t cured her, but it has kept the cancer at bay.

In the federal health program’s early years, many people enrolling were police officers, firefighters and other people who worked on the debris pile. More recently, though, a majority of applications have been from people who worked or lived in Lower Manhattan — folks like Carl Sadler, who was in Morgan Stanley’s 76th floor office in the Trade Center’s south tower when it was struck and rocked by a hijacked aircraft.

“There were millions of pieces of paper flying out. Credenzas. Computers,” Salder says. “We saw chairs flying by that looked like they had people in them.”

He worked his way down stairwells and escalators to the street, then moved away with the crowd. “As we got to Water Street, just a block away from the Fulton Fish Market, there was a huge explosion and the clouds and everything just turned black ash and gray and we were covered with soot,” he says.

Initially, Sadler’s health seemed fine. But a few years after the attacks, he started to get winded while exercising and suffering from recurring bronchitis. In his 60s, he had to give up some outdoor pursuits like skiing and soccer.

“I just had breathing problems,” he says, “but I never knew what they were.”

Now 80, he has been diagnosed over the years with acid reflux disease, asthma, and also thyroid cancer and skin melanoma, for which he was successfully treated. He figured it was all just part of getting older until around 2017, when a friend suggested he register with the World Trade Center health program.

Last year another 6,800 people joined the health program. Not all its members are currently sick. Many have signed up in case they get cancer in the future. Some have had their conditions clear up. Last year, about 1,000 people in the program got in-patient treatment and around 30,400 got outpatient treatment, according to program statistics.

The victim compensation fund, which makes payments to people with illnesses linked to the attacks, has an unlimited budget from Congress, but the medical program has grown so much it might run out of money. Members of Congress have introduced a bill that would provide an additional $2.6 billion over 10 years to cover an expected funding gap starting in 2025.

Under the program, anyone who worked or lived in Lower Manhattan or a small slice of Brooklyn is eligible for free care if they develop certain illnesses. The list includes about a dozen types of airway or digestive disorders, 10 different psychological disorders and at least two dozen types of cancer.

Research is also underway to possibly add to the list of covered conditions. The program’s administrator, Dr. John Howard, says conditions being studied now include autoimmune diseases, like rheumatoid arthritis.

One early estimate was that as many as 490,000 people could wind up being covered, in part because people don’t have to prove their sickness is related to the Sept. 11 attacks to qualify. If a person has a condition on the list, they are presumed to be eligible.

“We cover lung cancer, regardless of attribution issues,” Howard says. “If you have lung cancer, we don’t go through an analysis of how many pack years of smoking you engaged in.” 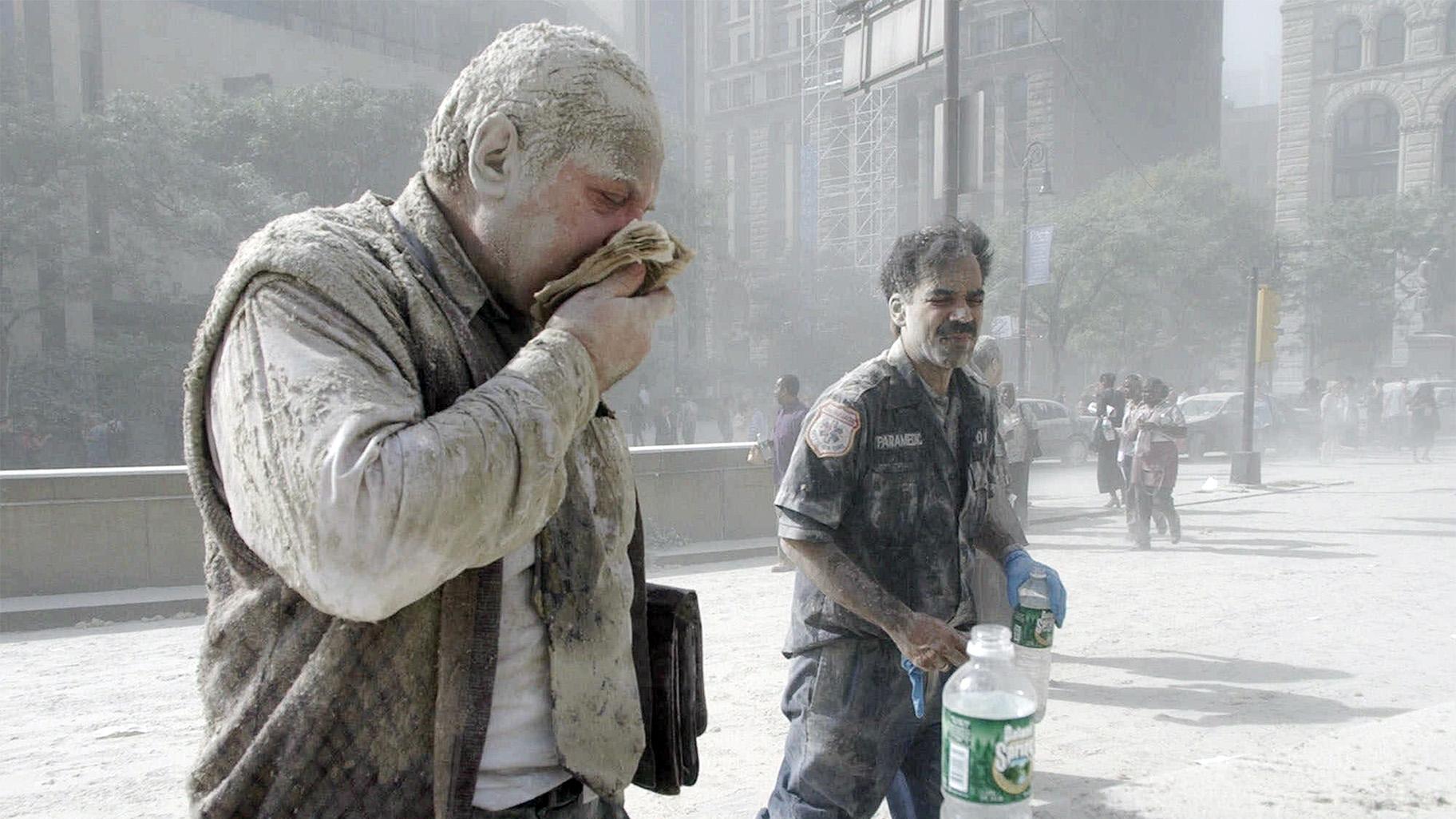 In this Sept. 11, 2001 file photo, a man coated with dust and debris from the collapse of the World Trade Center south tower coughs near City Hall, in New York. (AP Photo / Amy Sancetta, File)

Viewed through the lens of public health, what might the next 20 years after 9/11 hold for people who were there on that morning, and on the days and weeks that followed?

The average age of enrollees in the federal health program is now around 60, and Dr. Jacqueline Moline, director of the World Trade Center health clinic at the Northwell Health medical system, is concerned that people’s health problems will worsen as they age. Cancer caused by asbestos, she noted, can take as long as 40 years to develop after exposure.

“We are just getting to the point where we might start seeing stuff,” Moline says. She’s also deeply concerned about the long-term effect of post-traumatic stress.

In addition to the psychological harm, there are fears that the constant jolts of adrenaline and other stress hormones that come with PTSD could worsen heart problems or weaken the immune system. And with that, the emotional and physiological ripples of one day in September 20 years ago could collide in new and debilitating ways.

Crane, who has been treating ground zero responders since the beginning, says one thing is clear based on the continuing stream of new patients: The issue isn’t going away.