R. Kelly Sex Trafficking Trial: What to Know and Expect 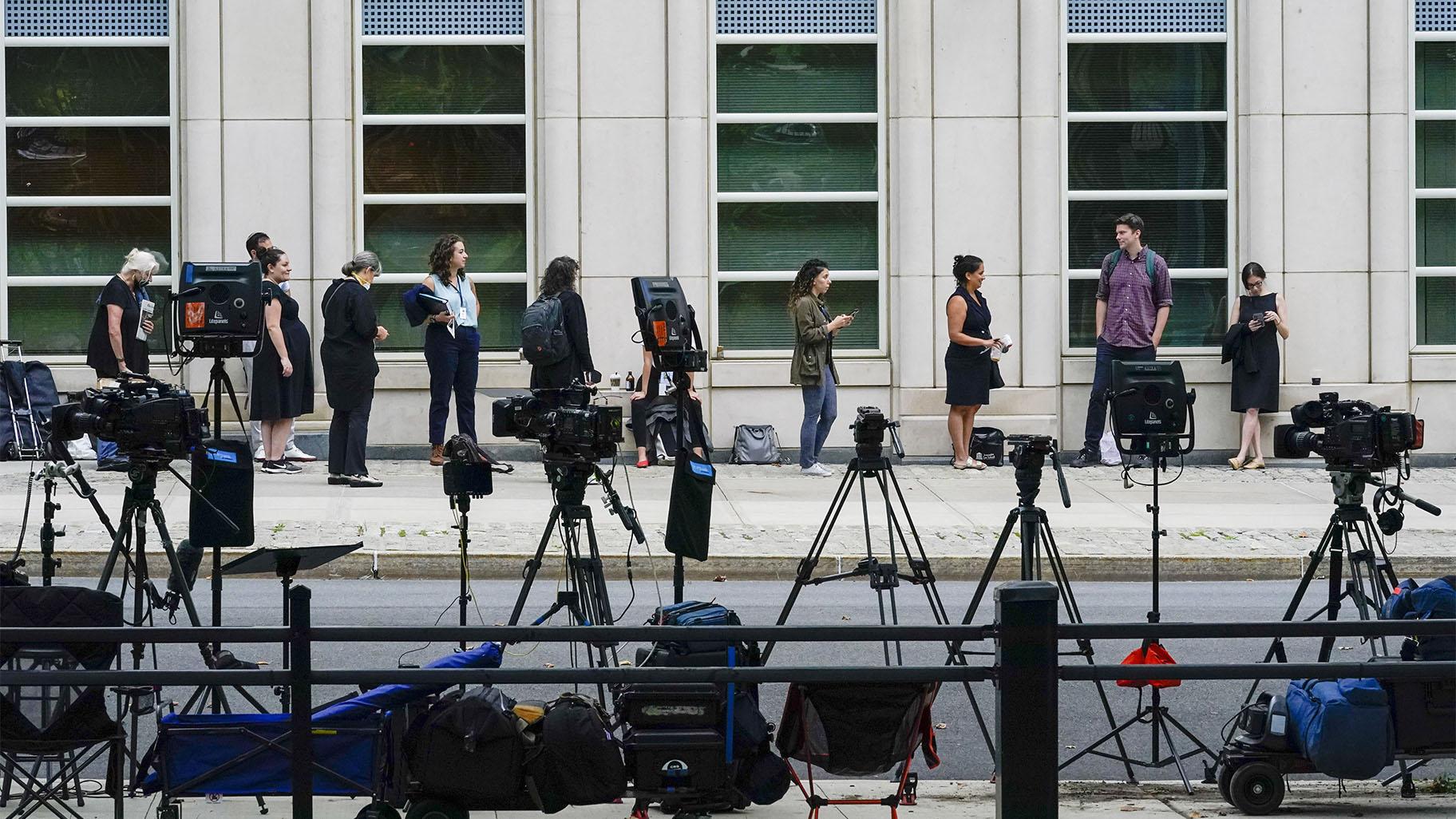 Television crew equipment is set up across the street as reporters and spectators line up outside Brooklyn Federal court for opening statements in R&B star R. Kelly's long-anticipated federal trial arising from years of allegations that he sexually abused women and girls, Wednesday, Aug. 18, 2021, in New York. (AP Photo / Mary Altaffer)

WHAT IS R. KELLY KNOWN FOR?

You’ve probably heard “I Believe I Can Fly” at an inspirational moment or “Ignition (Remix)” at a college party. That’s R. Kelly. The 54-year-old is an R&B superstar whose heyday was in the ‘90s and early 2000s when he racked up a slew of awards, including multiple Grammys.

WHERE IS R. KELLY CHARGED?

New York, Illinois and Minnesota, all sex-related cases. The trial now underway is in a federal court in Brooklyn. He has pleaded not guilty to all charges.

WHAT IS THIS SPECIFIC TRIAL ABOUT?

This is a racketeering case. Prosecutors say R. Kelly physically, sexually and psychologically dominated children — girls and boys — and women, often recording sex acts with minors, and using a cadre of loyalists to do his bidding and recruit victims. Kelly’s lawyers have pushed back, calling the accusers groupies who “were dying to be with him.”

CAN I WATCH THE R. KELLY TRIAL LIVE?

No. No cameras are allowed in federal court.

The top count of racketeering carries a sentence of up to 20 years in prison if convicted. He also faces charges under the Mann Act.

WHAT IS THE MANN ACT?

The Mann Act is a 1910 law that forbids transporting “any woman or girl” over state lines for “immoral” acts.

WAS R. KELLY CHARGED WITH A CRIME WHEN HE MARRIED 15-YEAR-OLD AALIYAH IN 1994?

Not at the time. Aaliyah, an R&B superstar whose career was cut short by a fatal plane crash in 2001, worked with Kelly. He produced her debut album, which happened to be named “Age Ain’t Nothing But A Number.” They married in secret that same year, but it was annulled months later because she was underage.

HOW OLD WAS R. KELLY WHEN HE MARRIED AALIYAH?

DOES AALIYAH HAVE ANYTHING TO DO WITH THIS CASE?

Yes. This is the first time R. Kelly has faced charges in connection with his marriage to Aaliyah. Federal prosecutors charged Kelly with obtaining a fake ID for a minor the day before their wedding. Kelly’s attorneys have long said he didn’t know how old she was. Their Illinois marriage license said she was 18.

When he isn’t in court, he’s at the Metropolitan Detention Center, a federal lockup in Brooklyn. That’s the same jail currently holding Ghislaine Maxwell, the British socialite awaiting trial on charges that she procured young victims for the sex-abusing millionaire Jeffrey Epstein.

HOW LONG HAS R. KELLY BEEN IN JAIL?

He’s been held since July 2019, when federal indictments were announced in Chicago and New York. But he’s only been in New York since June. His lawyer says he’s gained a lot of weight and run out of money while in jail.

WAS R. KELLY ATTACKED IN JAIL?

Yeah, almost exactly a year ago, in Chicago. A convicted member of the Latin Kings gang says he beat Kelly up — repeatedly hitting him on the head — because he wanted attention on his own case. Kelly’s lawyers tried to use the attack as justification for releasing him on bail, to no avail.

WHO IS ON THE JURY?

Seven men, five women. We don’t know who the jurors are — the judge ordered their names and other details that could identify them withheld.

HOW LONG IS THE TRIAL EXPECTED TO LAST?

About a month or so.

WHO HAS TESTIFIED SO FAR?

Jerhonda Pace, who testified she was 16 when she met Kelly. She said he beat and choked her and gave her herpes. An ex-employee, Anthony Navarro, said he never saw any sexual abuse but testified that R. Kelly’s home was like a “Twilight Zone” where everyone — including “girls” — was under his thumb, needing to seek permission to eat or leave.

IS THERE ANYTHING UNUSUAL ABOUT THE TRIAL?

Well, media and the public are barred from the courtroom and have to watch a video feed of the witnesses from an overflow room, where no phones or computers are allowed. The judge cited coronavirus concerns in decreeing the viewing accommodations, but other recent trials in New York have permitted access to the courtroom.

THIS ISN’T THE FIRST TIME R. KELLY’S BEEN IN LEGAL HOT WATER, RIGHT?

He was acquitted in a 2008 child pornography case in Chicago. He’s also been embroiled in many lawsuits.