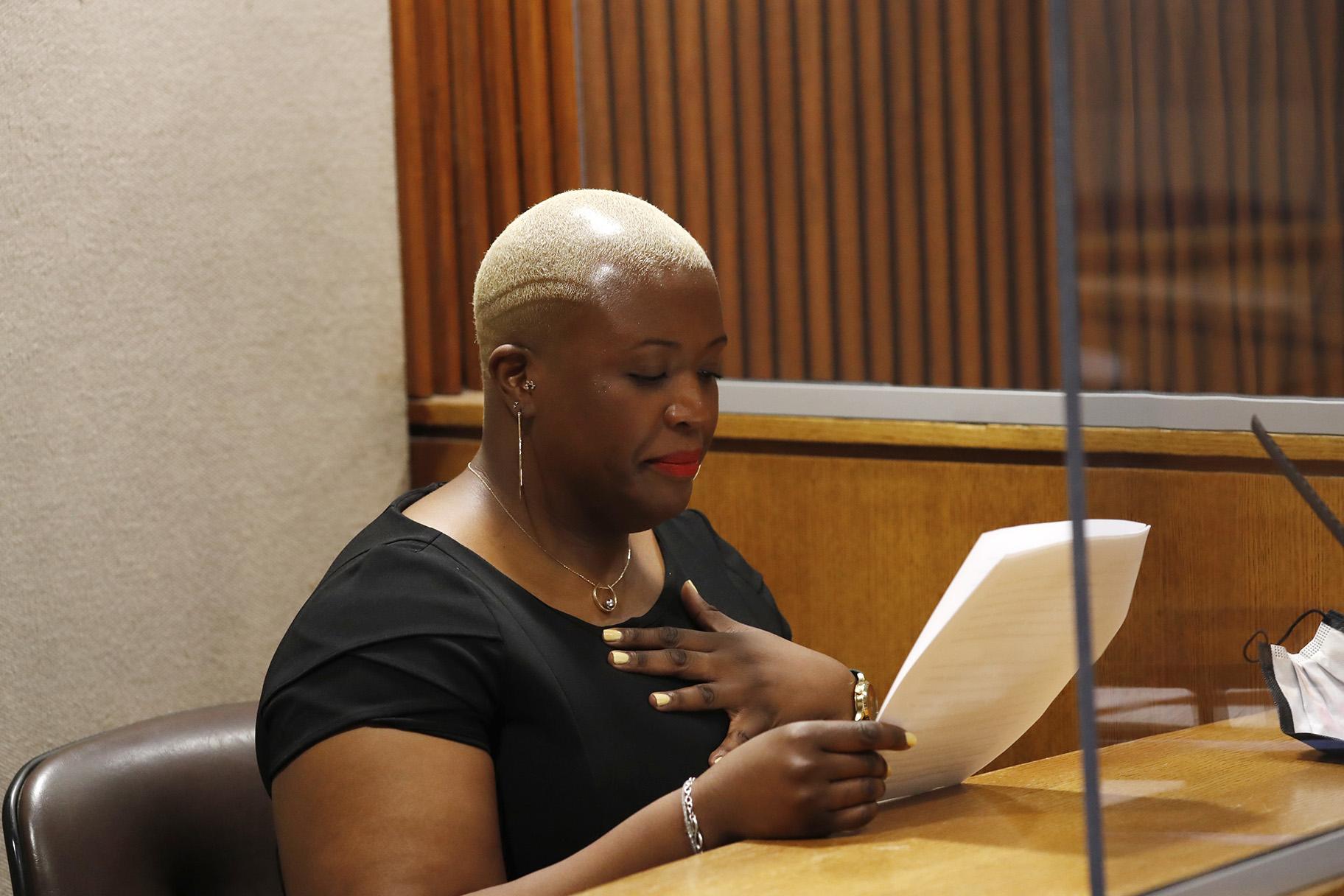 Cleopatra Cowley, mother of Hadiya Pendleton, delivers her victim impact statement during the sentencing hearing of Kenneth Williams for the murder of Hadiya Pendleton at the Leighton Criminal Court Building in Chicago on July 20, 2021. (Jose M. Osorio / Chicago Tribune / Pool)

The man who served as the getaway driver in the fatal 2013 shooting of teen Hadiya Pendleton has been sentenced to 42 years in prison following his conviction of first-degree murder.

During a sentencing hearing Tuesday, Pendleton’s mother and brother made clear they feel Kenneth Williams, 28, was just as responsible for Hadiya’s death as Micheail Ward, the man who fired the fatal shots into Harsh Park in the Kenwood neighborhood in January 2013.

“Kenneth you are responsible for so much sadness, hurt and depression,” Pendleton’s mother Cleopatra Cowley said during her victim impact statement Tuesday. “We’ve all had to recreate our lives, learn how to breathe, think, communicate and function. It has been hell.”

Williams was sentenced to 35 years in prison for his conviction on a charge of first-degree murder. That will be followed by a 7-year sentence on an aggravated battery conviction, which will be served consecutively.

Ward was previously convicted and sentenced in 2019 to 84 years in prison. Williams, who drove Ward before and after the shooting, faced a sentence of between 26 and 90 years during Tuesday’s hearing, though Cook County prosecutors indicated they were not seeking the maximum penalty in this case.

But Assistant State’s Attorney Brian Holmes made clear that whatever sentence Judge Diana Kenworthy imposed, it had to serve as a deterrent to others.

“Let the word go forth from this courtroom that if you help, encourage (or) drive the getaway car, point out and select the victims for a shooter or help the shooter in any way, and then you brag about it to your friends … you will get caught,” he said. “You will be tried, you will be convicted and you will be sentenced severely.”

Pendleton, 15, was shot in the back and killed on Jan. 29, 2013 while hanging out with friends at a Kenwood neighborhood park on the South Side. At the time of the shooting, she and her friends were standing under a canopy, taking cover from the rain.

The homicide occurred just a week after Pendleton, a King College Prep student, performed at the second inauguration of President Barack Obama in Washington, D.C. She has since become a symbol for gun violence in Chicago. The “Wear Orange” movement, which was based on Pendleton’s favorite color, was started in her memory to raise awareness about gun violence.

“I am forever scarred by the loss of my sister,” Hadiya's brother Nathaniel Pendleton Jr. said. “She is now gone forever due to the actions made by Kenneth Williams. He can get visits from his family. My family has to visit a grave.” 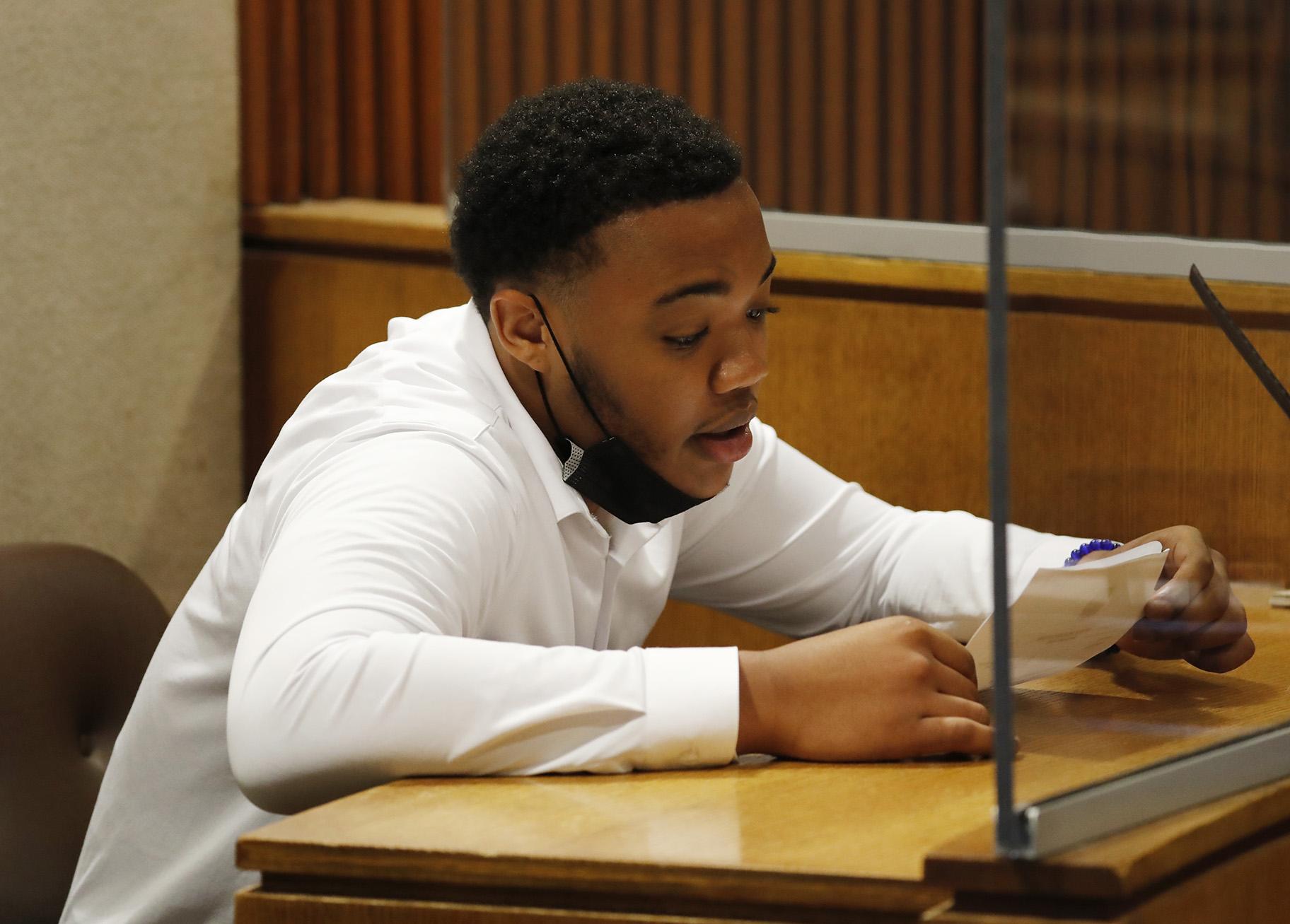 Ward and Williams were arrested in February 2013. Ward confessed to police during a recorded interrogation that was shown to jurors, saying he was trying to shoot rival gang members. He later recanted that statement.

According to Holmes, previous testimony indicated Williams had recognized some people in the park on the day of the shooting, and switched places with Ward to allow Ward to shoot, out of a concern that he could be recognized.

Williams, who acted as his own attorney at sentencing, repeated throughout Tuesday’s hearing that he did not consent to the court proceedings, as he subscribes to the sovereign citizens movement, described by the state’s attorney as an “extremist group” whose followers believe they are not subject to governmental laws or regulations.

While Williams did not admit to taking part in the shooting — instead claiming that he had been “misjudged” — he did address Pendleton’s family, saying he was sorry for their loss and “deeply troubled by your sadness and what you all endure.”

In announcing the sentence Tuesday, Judge Kenworthy acknowledged that Williams had no prior criminal background before his arrest in this case and was under the age of 21 at the time of Pendleton’s murder.

But she also recognized that although Williams didn’t pull the trigger himself, he was a willing participant in the shooting.

“This is not a case, as the state pointed out, where Mr. Williams was merely a lookout or unaware of what was about to happen,” she said. “He was not taken by surprise.”