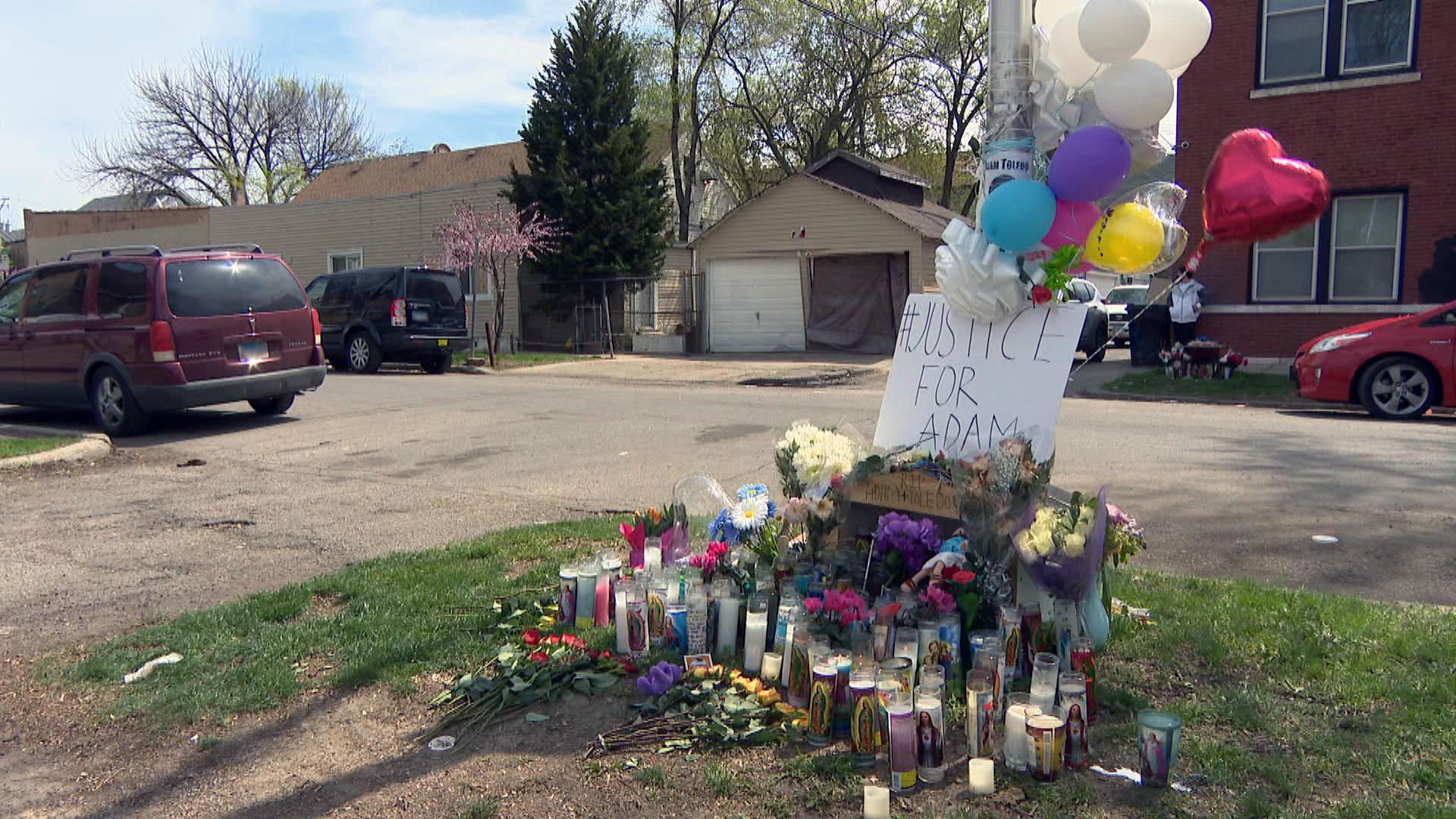 A memorial of candles and flowers for 13-year-old Adam Toledo sits near the alley where he was killed March 29 by a Chicago police officer. (WTTW News)

(CNN) — While the true scope of the impact of police brutality is difficult to quantify, a new report indicates that more than 2,600 Latinos were killed by police or died while in custody in recent years.

The report released Thursday by UnidosUS in partnership with a group of researchers, scholars, activists and family members of Latinos killed by police, indicates that deaths of people of color are severely undercounted and much more needs to be done to produce an accurate database that collects ethnicity information.

As part of its initial effort and awareness of the limitations of its method, the newly formed group, the Raza Database Project, analyzed eight national databases that track police killings and use a combination of news reports and public records. Researchers took a closer look at entries that were identified as “White,” “Other,” or “Unknown” and compared the names to the surname datasets from the 2010 US Census to spot any individuals who may have been misidentified.

Between 2014 and May 9 of this year, there were a total of 15,085 people who died in police custody or were killed in encounters with officers, according to the report.

But these findings should not be considered final as its method may lead to both overcounting and undercounting, the report said.

Roberto Rodriguez, the project’s director, said that the group’s estimates are not comprehensive but they offer a more accurate look, especially because of the gaps in government-level data collection.

The group noted the numbers likely still undercount Latinos and other people of color because they may not have surnames of Hispanic origin.

In recent years, a number of activists and media outlets have taken it upon themselves to collect data of police violence because there is no federal database of information.

But they have found that law enforcement agencies often lump individuals into broader racial categories and not ethnicities.

“There’s no standardization of how people are labeled and there’s no centralization,” said Rodriguez, who is also an author and former associate professor at the University of Arizona. “All of these groups are doing the government’s work.”

Janet Murguía, president and CEO of UnidosUS, said the group’s findings are a “disturbing” indication that over-policing in communities of color might be more widespread than previously thought.

“The numbers we already knew about are unacceptable; these new numbers are unconscionable,” Murguía said in a statement. “This data demands immediate consideration by those in Congress who are working on much-needed law enforcement reform legislation to ensure that their solutions truly reflect the scope of the problem.”

Rodriguez said the group plans to expand the findings released Thursday and launch more efforts to delve into the issue of Latinos killed by or while in custody of law enforcement.

The report was released as calls for police accountability among the Hispanic community have increased in recent months following the deaths of Latino boys and men in police encounters.

In Chicago, 13-year-old Adam Toledo and Anthony Alvarez, 22, were killed by officers at the end of separate foot chases in March.

The two deadly shootings sparked outrage and protests in Chicago, with community members demanding changes to the Chicago Police Department’s practices and policies, and prompted Mayor Lori Lightfoot to announce last month the city’s police department must implement a foot pursuit policy by the summer.

Meanwhile in California, the family of Mario Gonzalez Arenales seeks justice for the 26-year-old who died on April 19. He died in police custody in Alameda, California, after being restrained for about five minutes at a local park. Officers were answering separate calls about a man who appeared to be intoxicated and a possible theft.

Next week, the family of Sean Monterrosa will host a series of events to honor his life and raise awareness to the issue of police brutality among Black and brown people. Monterrosa, 22, was shot and killed by an officer in Vallejo, California, last year, just a week after George Floyd’s death in Minneapolis.