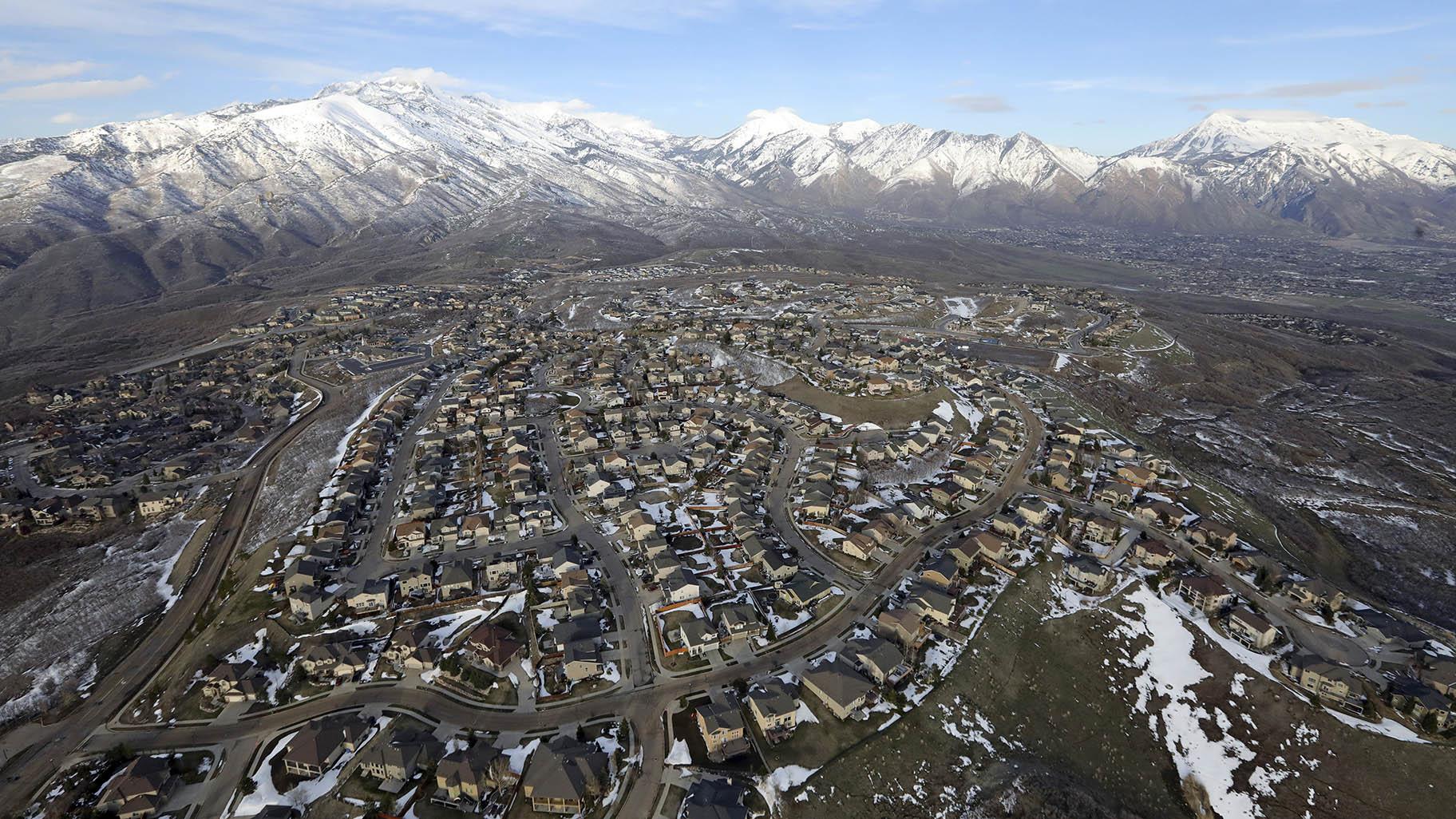 FILE - Rows of homes, in suburban Salt Lake City, on April 13, 2019. Utah is one of two Western states known for rugged landscapes and wide-open spaces that are bucking the trend of sluggish U.S. population growth. (AP Photo / Rick Bowmer, File)

Cece Linder was living in a 770-square-foot apartment outside Washington, D.C., last spring when the area went into lockdown because of the coronavirus pandemic.

In May 2020, after a few months of both living and working in the small space, Linder decided to leave the capital area and move into the 2,000-square-foot (186-square-meter) beachside home she jointly owns with her parents in Cocoa Beach, Florida. Now she gets to see the sunrise over the water each morning before work.

“If I’m teleworking anyway, why not move to this other place that is more visually attractive, it’s beachside, and someone can occasionally cook for me?" Linder said. “Though that didn’t exactly work out. My mom has me cooking for them.”

Linder was not alone in her thinking. According to a new study and data from the U.S. Census Bureau, she was one of thousands of people who migrated out of the nation's largest metropolitan areas and into smaller ones during the pandemic.

The study found that, like Linder, many of the migrants weren’t driven by new jobs or weather — or even a fear of the virus — but a desire to be closer to family and a freedom to make it happen because of remote working. Although the pattern of people moving from larger to smaller cities has been going on for several years, the pandemic exacerbated that trend, said Peter Haslag of Vanderbilt University, who conducted the study on migrant motivations with Daniel Weagley of Georgia Tech. Their paper has not yet been published.

The data adds to understanding of how the pandemic has changed where and how Americans live. The moves were most common among those with higher incomes and more job flexibility. If the trends continue, it could have long-term implications for real estate markets, tax bases and the wealth inequality in cities, according to researchers.

“For us, the question is, is this a temporary blip or is it going to continue?" Haslag said. “If work-from-home really is going to be a factor in job and company decisions, and by allowing work and location to be separate decisions, people are going to be able to optimize their locations, if they have the right jobs."

The Census Bureau data shows that the New York metro area — which was hit early by the new coronavirus — declined by about 108,000 residents, or 0.5%. Roughly 216,000 residents moved out of the metropolitan area, but the natural increase from births and gains in international migration offset the departures. The New York metro area has experienced decelerated growth over the past several years, but last year's decline was a bigger bite of the Big Apple than in 2019, when it lost 60,000 residents.

“I think some core urban counties like Manhattan, San Francisco and others may have taken a bigger brunt of pandemic-related out-movement, as well as lower immigration,” said William Frey, a senior fellow at The Brookings Institution. “Overall, it was a year of slow growth with selective movement out of some urban centers."

Sun Belt megalopolises, such as Dallas, Houston and Phoenix, also grew last year, though not as much as their smaller cousins.

The Census Bureau data captured changes in states, metros and counties between July 1, 2019, and July 1, 2020. The last third of that time-frame overlapped with the first three months of the spread of the virus in the U.S. Population-change estimates are different from the 2020 census, a head count of every U.S. resident that determines how many congressional seats each state gets. Those numbers were released last week. Population changes are estimated using data on births, deaths and migration.

Haslag and Weagley estimate that 10% to 20% of the 300,000 interstate moves they studied between April 2020 and February 2021 were influenced by the pandemic. Their study used four years of long-distance moving data obtained from UniGroup, the parent company of United Van Lines and Mayflower Transit.

Job-related reasons for moving dropped from 46.6% of responses before the pandemic to 34.5% after the start of the pandemic in the U.S. in March 2020, while the desire to be closer to family jumped from 24.7% to 29.9%. The researchers theorized the jump for family reasons was due to people wanting to create social “bubbles" with family members, and the drop in job-related reasons was due to remote working and the decoupling of jobs from offices.

“It’s not really about the infection rate when it comes to moving. It’s about all the other things that came with the pandemic, whether it was to be closer to family or work from home,” Haslag said. “That was really surprising to us."

Higher-income households moved less because of job loss or to take a new job than for other reasons such as lifestyle or the ability to work remotely. In fact, 75% of those who cited the ability to work remotely had annual households earnings of $100,000 or more. Lower-income households were more likely to move for financial reasons such as job loss or to move to a place with a lower cost of living, the researchers said.

David Mann and his wife, Lauren, had been wanting to move to the U.S. southeast from Dallas to be closer to family and friends for some time, but it was the pandemic that made it possible. Knowing they could work from home in their jobs in supply-chain consulting and merchandise planning, they made the leap and moved to Atlanta last summer.

“Working from home gave us the opportunity to move without having to look for new jobs,” Mann said.