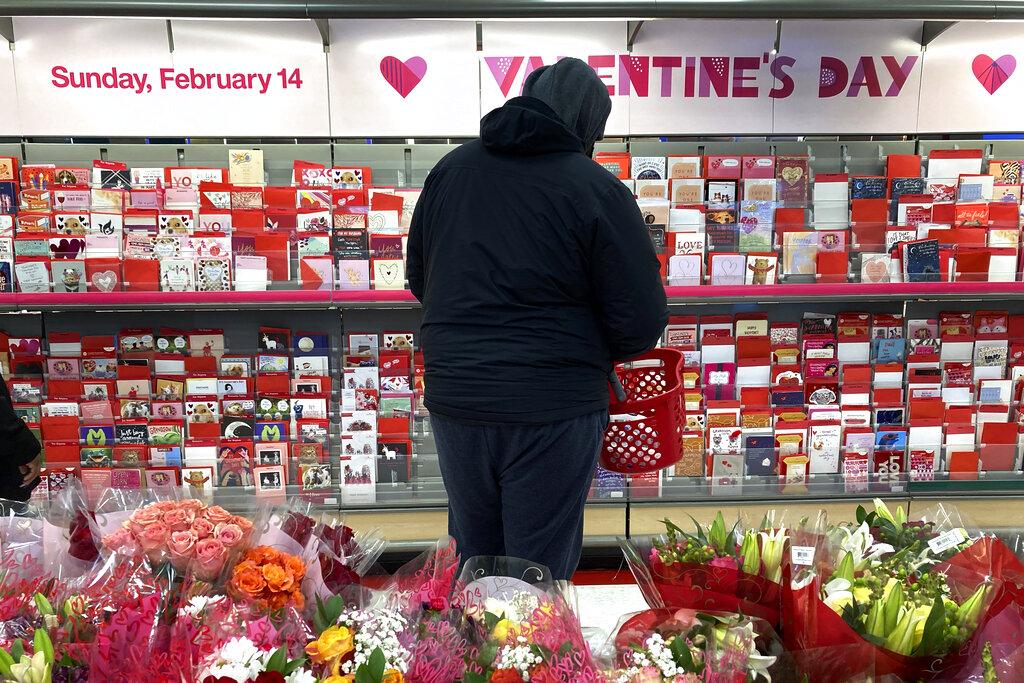 The notecards poking from bouquets rushing out of a Chicago florist all carry similar messages: “looking forward to celebrating in person.”

“The notes aren’t sad,” said Kate Prince, a co-owner of Flora Chicago on the city’s North Side. “They’re hopeful.”

On this Valentine’s Day, Americans are searching for ways to celebrate love amid so much heartache and isolation as the coronavirus pandemic stretches past its year anniversary. Some are clinging to hope, seen in the most vulnerable and frontline workers getting vaccinated, in loosening restrictions on restaurants in the hardest hit places, in case numbers starting to wane. But the death toll is still climbing toward a half-million dead in the United States and many remain shuttered in their homes.

Prince said florists are scrambling to keep up with the onslaught of orders from people trying to send their love from a safe distance.

“We are crushed,” she said.

Phones are ringing off the hook at restaurants in cities that have loosened restrictions on indoor dining just in time for Valentine’s Day, one of the busiest days of the year for many eateries that have been devastated by shutdowns designed to slow the spread of the virus.

In Chicago, the mayor loosened up indoor dining restrictions this week. After limiting restaurants to 25% capacity and 25 people per room, restaurants now must remain at 25% but they can serve as many as 50 per room.

The Darling restaurant is fully booked for this weekend and has been for weeks.

Sophie Huterstein, the restaurant’s owner, said COVID-19 has allowed the 2-year-old eatery to accomplish the impossible: make people happy to agree to a 4 p.m. reservation.

“People are being very flexible,” she said.

They are also this Valentine’s Day willing to do something else over a weekend where the high temperature will reach the teens and the low will plummet well below zero.

“We have 14 greenhouses and people are coming out in full ski gear,” she said.

In New York City, the America Bar restaurant in the West Village is also fully booked for Valentine’s Day with a long waiting list and high demand for the newly allowed 25% capacity for indoor tables, said David Rabin, a partner in the eatery. More seats, along with the governor’s decision to allow closing times to move from 10 p.m. to 11 p.m., has allowed him to give more shifts to his workers.

T Bar NYC Steak and Lounge on the Upper East Side is also fully booked. Owner Tony Fortuna says some of his customers won’t dine indoors and he understands, but for those that have been clamoring to get back to restaurant dining, 25% is a good start. It gives people a glimmer of normalcy at a heartbreaking time.

“It gets everybody motivated, we see a little bit of hope,” he said. “It’s all about perception: you see people going out and moving around it makes everybody feel in a different mood.”

Gil and Mercy Galicia have barely left their home in almost a year since lockdowns began, said their daughter, Cris Charbonneau. They had seen their close-knit family, three children and six grandchildren spread across the country.

Like many seniors, the year has been especially hard on them. They immigrated from the Philippines in the 1960s and have lived in their home on a half-acre plot for more than 40 years.

Mercy, 80, is a cancer survivor and has been diagnosed with early-onset Alzheimer’s. Gil, 88, used to go on daily walks at the mall to stay active, but he hasn’t for a year. He is fearful that the isolation has set them back, and he doesn’t know how much longer they can manage living on their own.

They don’t have a computer. When the vaccine became available, Gil called everywhere and couldn’t get through. Charbonneau was on a video call with them Thursday and saw a tweet from a local news station that the grocery store near their home had opened appointments online.

She was scrambling to get two appointments. She wasn’t paying attention to the date. She told them she’d booked them for Sunday, Feb. 14.

“That’s Valentine’s Day!” her father exclaimed and smiled at his wife.

“What a great way to celebrate my love for you.”

They hung up. Their daughter wept.