US Jobless Claims Remain High at 712,000 as Virus Escalates 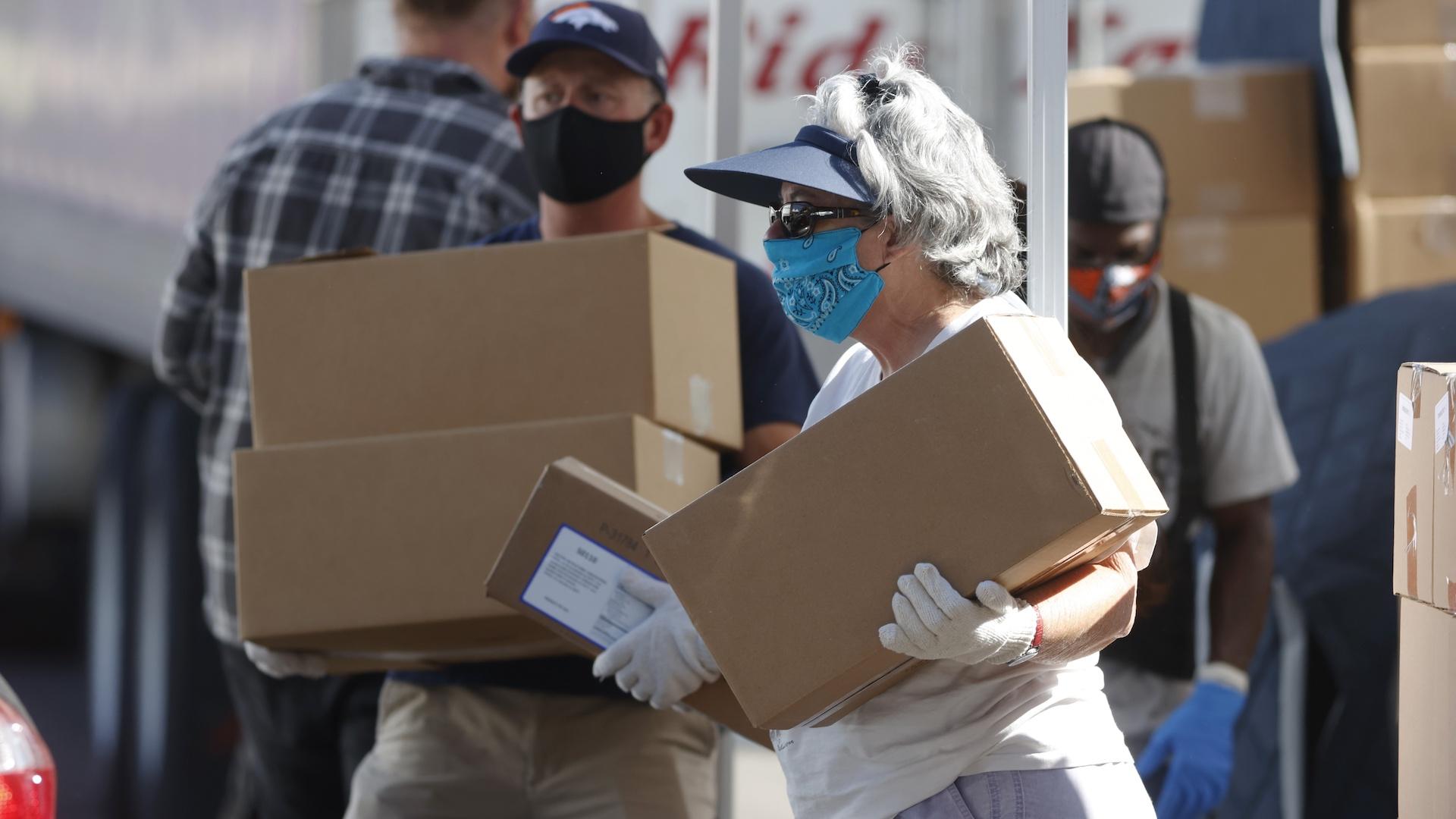 In this June 26, 2020, file photo, volunteers Juanita MacKenzie, front, and Dave Stutman carry boxes of food to a waiting car at a large mobile pantry set up by the Food Bank of the Rockies in the parking lot of Empower Field at Mile High in west Denver. (AP Photo/David Zalubowski, File)

WASHINGTON (AP) — The number of Americans applying for unemployment benefits fell as the nation celebrated Thanksgiving last week to a still-high 712,000, the latest sign that the U.S. economy and job market remain under stress from the intensified viral outbreak.

Thursday's report from the Labor Department said that initial claims for jobless aid dropped from 787,000 the week before. Before the virus paralyzed the economy in March, the number of people applying for unemployment benefits each week had typically amounted to roughly 225,000. The chronically high pace of applications shows that nearly nine months after the pandemic struck, many employers are still slashing jobs.

The total number of people who are continuing to receive traditional state unemployment benefits declined to 5.5 million from 6.1 million. That figure is down sharply from its peak of nearly 23 million in May. It means that some jobless Americans are finding jobs and no longer receiving aid. But it also indicates that many of the unemployed have used up their state benefits, which typically expire after six months.

With layoffs still elevated and new confirmed viral cases in the United States now exceeding 160,000 a day on average, the economy’s modest recovery is increasingly in danger. States and cities are issuing mask mandates, limiting the size of gatherings, restricting restaurant dining, closing gyms or reducing the hours and capacity of bars, stores and other businesses.

Most experts say the economy won't be able to sustain a recovery until the virus is brought under control with an effective and widely used vaccine.

Many jobless Americans are now collecting checks under two federal programs that were set up this year to ease the economic pain inflicted by the pandemic. But those programs are set to expire the day after Christmas. When they do, benefits will end completely for an estimated 9.1 million unemployed people.

The number of people collecting aid under one of those programs — the Pandemic Unemployment Assistance program, which offers coverage to gig workers and others who don’t qualify for traditional benefits — fell by 339,000 to 8.9 million for the week ending Nov. 14.

But the number of people receiving aid under the second program — the Pandemic Emergency Unemployment Compensation program, which provides 13 weeks of federal benefits to people who have exhausted their state aid — rose by 60,000 to 4.6 million.

Still, the Government Accountability Office, a federal watchdog, has concluded that the jobless claims numbers are being distorted by flaws in the way the government collects the data. The GAO said the problem arose because the Labor Department uses state numbers as a proxy for the number of people claiming benefits nationwide. But backlogs in state processing of claims and other data-collection problems have resulted in inaccurate counts, the GAO reported.

For months, Congress has failed to agree on any new stimulus aid for jobless individuals and struggling businesses after the expiration of a multi-trillion dollar rescue package enacted in March. This week, though, efforts to forge some limited short-term rescue package have intensified. Democrats have scaled back their demands for a $2 trillion-plus measure by more than half in hopes of breaking the logjam.

Democratic leaders have given their support to a nearly $1 trillion package as a “basis” for discussions. This plan would establish a $300-a-week jobless benefit, send $160 billion to help state and local governments, boost schools and universities, revive “paycheck protection” subsidies for businesses and bail out transit systems and airlines. So far, though, Senate Majority Leader Mitch McConnell has been unwilling to abandon a $550 million Senate Republican plan that failed twice this fall.

President-elect Joe Biden lent his support to the bipartisan effort Wednesday, saying the developing aid package “wouldn’t be the answer, but it would be the immediate help for a lot of things.” Biden said he wants a relief bill to pass Congress now, with more aid to follow next year.

Regardless of what happens on Capitol Hill, the promise of a vaccine could help ease the health and economic crises in coming months. In the meantime, with the virus still raging, the economic damage has become increasingly visible. The data firm Homebase reports that its measures of job market health — employees working, hours worked and businesses open — have deteriorated from where they stood in the summer.

Likewise, the data firm Womply estimates that 21% of small businesses were shuttered at the start of November, up from June’s 16% rate. Womply also said that consumer spending at local businesses declined 30% last month from a year earlier, marking a deterioration from a 20% year-over-year decline in October.

Americans are bracing for the picture to worsen: Thirty percent of adults surveyed by the Commerce Department from Nov. 11 to 23 reported that they or someone in their household expected to lose income in the next four weeks, up from 23% of those surveyed from Sept. 30 to Oct. 12.

US Jobless Claims Fall to 730,000 But Layoffs Remain High