Fauci: US May See ‘Surge Upon Surge’ of Virus in Weeks Ahead 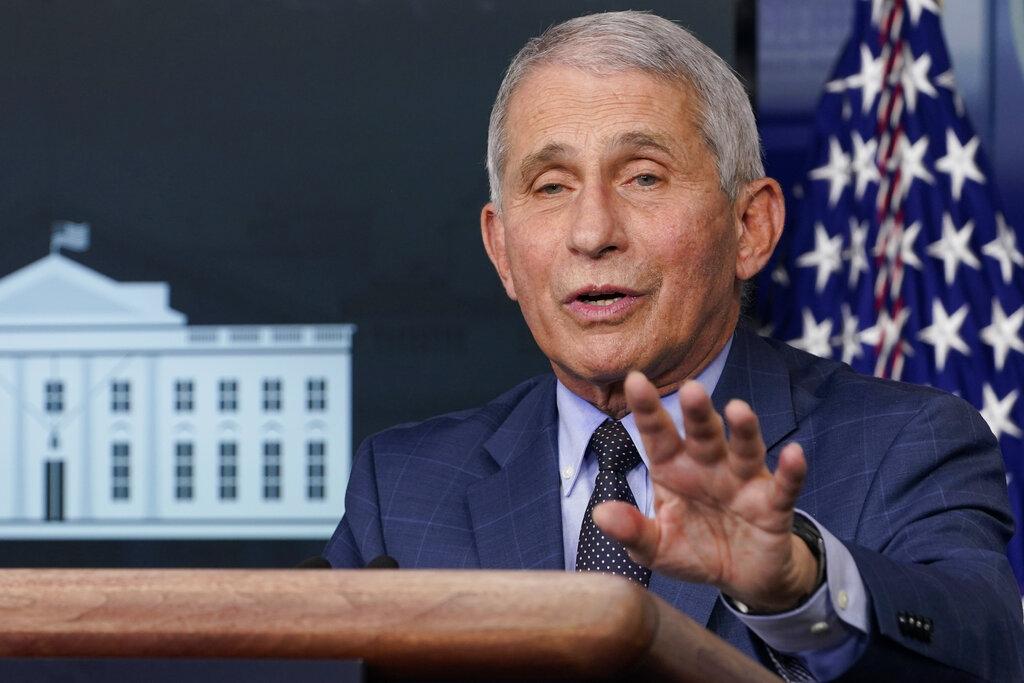 Dr. Anthony Fauci, director of the National Institute for Allergy and Infectious Diseases, speaks during a news conference with the coronavirus task force at the White House in Washington, Thursday, Nov. 19, 2020. (AP Photo / Susan Walsh)

The nation’s top infectious disease expert said Sunday that the U.S. may see “surge upon a surge” of the coronavirus in the weeks after Thanksgiving, and he does not expect current recommendations around social distancing to be relaxed before Christmas.

Meanwhile, in a major reversal, New York City Mayor Bill DeBlasio said the nation’s largest school system will reopen to in-person learning and increase the number of days a week many children attend class. The announcement came just 11 days after the Democratic mayor said schools would shut down because of rising COVID-19 cases.

“We feel confident that we can keep schools safe,” he said.

Dr. Anthony Fauci, director of the National Institute of Allergy and Infectious Diseases, told ABC’s “This Week” that the level of infection in the U.S. would not “all of a sudden turn around.”

“So clearly in the next few weeks, we’re going to have the same sort of thing. And perhaps even two or three weeks down the line … we may see a surge upon a surge,” he said.

Fauci addressed the school issue, saying that spread “among children and from children is not really very big at all, not like one would have suspected. So let’s try to get the kids back, but let’s try to mitigate the things that maintain and just push the kind of community spread that we’re trying to avoid,” he said.

Fauci also appeared on NBC’s “Meet the Press,” where he made similar remarks, adding that it’s “not too late” for people traveling back home after Thanksgiving to help stop the spread of the virus by wearing masks, staying distant from others and avoiding large groups of people.

“So we know we can do something about it, particularly now as we get into the colder season and as we approach the Christmas holidays,” he said.

The number of new COVID-19 cases reported in the United States topped 200,000 for the first time Friday. The highest previous daily count was 196,000 on Nov. 20, according to data from Johns Hopkins University.

Since January, when the first infections were reported in the U.S., the nation’s total number of cases has surpassed 13 million. More than 265,000 people have died.

Fauci said the arrival of vaccines offers a “light at the end of the tunnel.” This coming week, the Advisory Committee on Immunization Practices will meet with the Centers for Disease Control and Prevention to discuss a rollout of the vaccine, he said.

He added that President-elect Joe Biden should focus on distributing vaccines in an “efficient and equitable way.” Fauci also said he planned to push the new administration for a rigorous testing program.

“We’ve got to go beyond the symptomatic people and get a better understanding of the asymptomatic transmission,” he said.

Health care workers will likely be among the first to get the vaccine, with the first vaccinations happening before the end of December, followed by many more in January, February and March, he said.

“So if we can hang together as a country and do these kinds of things to blunt these surges until we get a substantial proportion of the population vaccinated, we can get through this,” Fauci said.

Other experts agreed that the coming weeks would be difficult, especially since so many traveled over the holiday and held in-person dinners indoors.

Dr. Deborah Birx, the White House coronavirus response coordinator, said Sunday on CBS’ “Face the Nation” that Americans who traveled this past week should try to avoid people over 65. She said that those who were around others for Thanksgiving “have to assume that you were exposed and you became infected and you really need to get tested in the next week.”

Birx implored people to take action, even if governors or local officials do not. “If your governor or your mayor isn’t doing the policies that we know are critical — masking, physical distancing, avoiding bars, avoiding crowded indoor areas. If those restrictions don’t exist in your state, you need to take it upon yourself to be restrictive.”

Meanwhile, a busy travel weekend continued, despite warnings for Americans to stay close to home and limit their holiday gatherings.

Aside from the Thanksgiving holiday itself, anywhere from 800,000 to more than 1 million travelers made their way through U.S. airport checkpoints on any day during the past week, according to Transportation Security Administration statistics. That’s a far cry from the 2.3 to 2.6 million seen daily last year. But it far surpasses the number of travelers early in the pandemic, when daily totals fell below 100,000 on some spring days.

In New York, some elementary schools and pre-kindergarten programs will resume classes Dec. 7, a week from Monday, the mayor said. Others will take longer to reopen their doors.

The plan for reopening middle and high schools is still being developed, de Blasio said.

About 190,000 students will be eligible to return to classrooms in the first round of reopening, just a fraction of the more than 1 million total pupils in the system. The great majority of parents have opted to have their kids learn remotely by computer.

De Blasio said that many of those returning in person will be able to attend five days of class a week, up from one to three days previously.

Elementary school students attending in person will be required to undergo frequent testing for the virus. Previously, the city set a target of testing 20% of teachers and students in each school building once a month. Now the testing will be weekly.

The mayor said the city was doing away with its previous trigger for closing schools, which was when 3% or more of the virus tests conducted in the city over a seven-day period came back positive.

New York exceeded that threshold early in November, and infections have slightly worsened since then. More than 9,300 residents have tested positive for the virus over the past seven days.