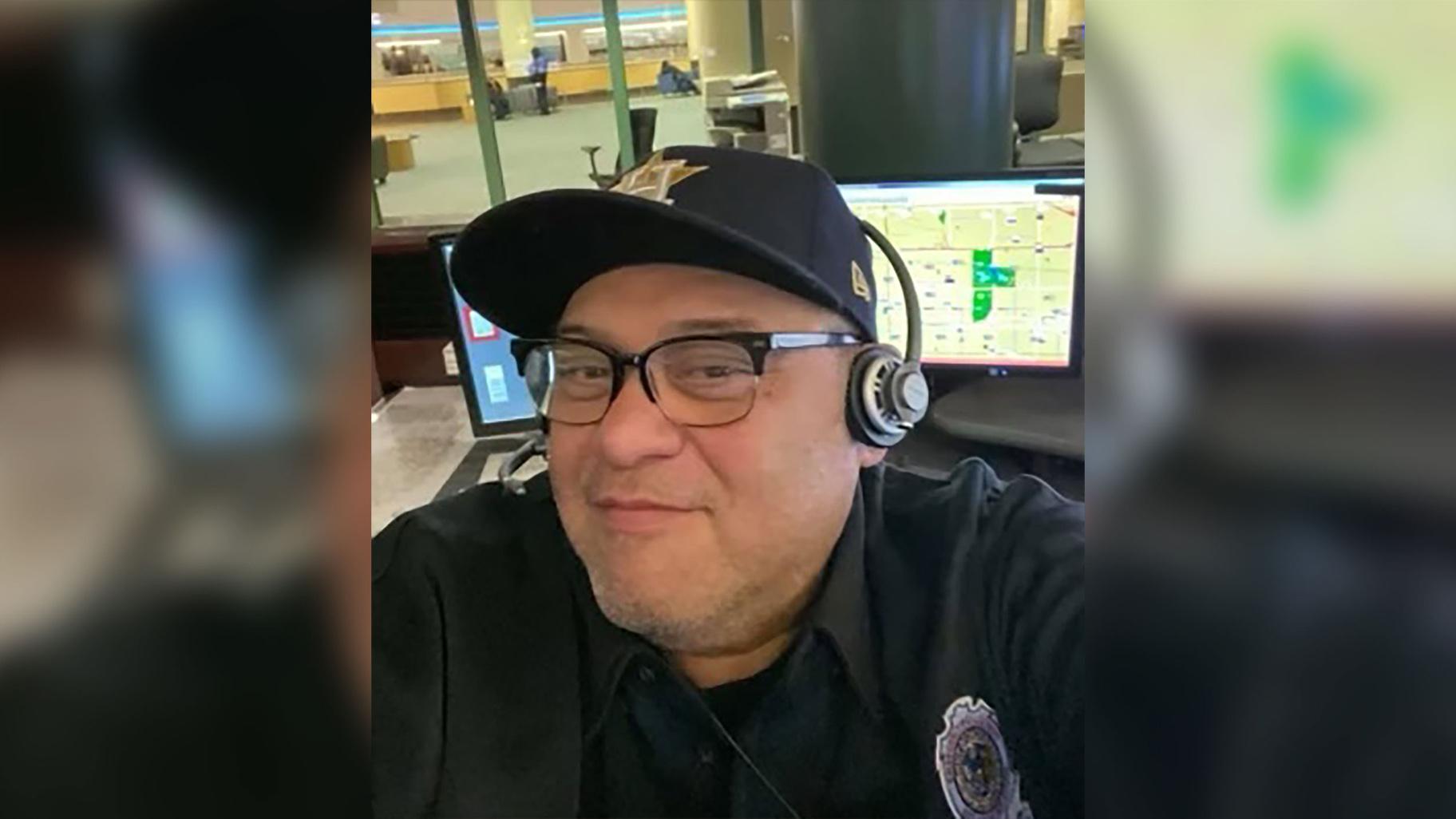 Guadalupe Lopez at the 911 dispatch center where he worked for more than 30 years. (Credit: Family photo)

(CNN) — As Guadalupe Lopez walked into work at Chicago’s 911 center one night four years ago, three officers were shot on the city’s West Side.

Lopez sat at his desk on the communications floor as officers screamed into their police radios. There was confusion over the location, and the wounded were without backup.

Lopez took over radio communication while his dispatching partner was briefed about the shooting. On this night and thousands of others, Lopez injected calm into a volatile and violent emergency. He helped coordinate ambulances, traffic closures and notifications to the hospital while remaining a steady and calm source of information for people whose lives depended on him.

Lopez, known as Lupe (or Lou, in emergencies) died earlier this month of COVID-19. He was 58 and among the essential workers who must show up to work, and one of the more than 9,100 people who have died from the disease in the Chicago area. It’s not clear where Lopez contracted the illness, but the city is treating this as an on-the-job death.

“His pride was going to work,” said Erica Lopez, his daughter. “He loved his job. He loved making sure police officers made it home at night.”

A wake for Lopez is scheduled for this weekend, with a funeral planned for Monday. His wife of more than 30 years is also sick with COVID-19 and will not be able to attend the services. She was transferred from the hospital where her husband died to a different one, where she was on a ventilator in the intensive care unit as of Friday, says Andy Lopez, 21, the couple’s youngest child.

Doctors are reducing her amount of assistance from the ventilator every day, Andy says. “Every little improvement is good to hear,” Andy said. “We just hope to hear that every day. We’re not settling until she’s out.”

Lopez worked as a dispatcher more than 30 years and grew up in the Little Village neighborhood. As a dispatcher, he handled police emergencies in an area that included where he grew up.

‘You’re working with the best’

News of his death spread through social media, with dispatchers, officers and scanner-listeners offering condolences. There’s a hashtag on Twitter, #ShitLupeSays, for the times listeners have quoted him. He had a dry sense of humor that brought some levity to a job where humor is a survival strategy.

On the night the officers were shot, his partner, Jason Martinez, handled the debriefing from the outgoing dispatcher. The two had been working together for years at that point, able to settle into an easy rhythm that can develop in partner relationships.

Early in their time together, Martinez took a phone call from an officer relaying information about a shooting. At the end of the call, Martinez said the officer told him, “’You’re working with the best, and you can learn a lot from him.”

“And that kind of stuck with me,” Martinez said. “To hear people speak on Lupe saying that this dude, this guy was the best at what he does.”

During tense moments, Lopez had a sense for what was going on that gave him credibility with officers, Martinez says. He could hear if something was going on in the background that required backup, or if an officer wasn’t letting on how bad a situation was for fear of having to call a “10-1,” which is an officer-in-distress call.

That’s a call officers make, and officers will sometimes gently admonish dispatchers for directing too large a response to an emergency.

Lupe, more than other dispatchers, would call a 10-1 if he thought the officers needed help, Martinez says. He worked the same area and with the same officers for so long — and had such a keen understanding of the work — that officers respected his judgment.

“If he felt he heard something, he went on the side of caution. Called it a 10-1,” Martinez said. “And I’ve heard situations, they’re out there letting (us) know it’s not that. But we didn’t get that with the ones Lupe would call out.”

Martinez went into work the night after Lopez died. Each of the dispatch positions has a small light atop it that dispatchers can use to request a supervisor. When he stepped onto the communications floor, all the dispatchers and call takers had turned on their lights as a tribute to Lopez. The radio zone Lopez worked also observed a moment of silence, and officers offered him tributes over the air.

“You always sent us home safely, brother. To our families,” one officer said. “We love you man. The voice of the city. We love you.”

Kids had no idea dad was so revered

Lopez grew up in Little Village, a vibrant neighborhood full of murals celebrating Mexican heritage. It’s a gateway to the Midwest for many Mexican immigrants. But it has also struggled with gang violence for decades.

He moved his young family from there in the early 1990s but still coached baseball at a park in the old neighborhood. Erica Lopez been getting messages from kids her father coached, letting her know how much he meant to them.

In the weeks since his death, officers have been passing by his house with their patrol cars, lights on, in tribute to Lopez. Andy Lopez had no idea his father was such a revered figure in the city’s emergency response community.

“We didn’t know Superman was living in our house,” Andy said. “He would really only tell my mom (about work), certain stuff he would get off his chest I would overhear. He always wanted to protect us, especially me, because I was the youngest.”

What his children most lament is time he won’t have with grandchildren, whom he adored. Lopez was disappointed his oldest daughter, Erica, got pregnant when she was 18. And when she came home from the hospital with her baby, he didn’t want to be involved in raising her.

“I saw him become this gentle giant,” she said. “He always had this hard exterior, this don’t-take-crap-from-anybody exterior. But with the grandkids, he melted.”

Soon he was rocking her and singing to her and planning her quinceañera. He talked about it since she was a toddler and may have been more excited about the rite-of-passage than anyone in the family, Erica says.

Erica celebrated her daughter’s quince last year and she’s been watching videos from that day. Lopez brought back cowboy boots from Mexico and danced all day.

When his youngest grandchild was born earlier this year, because of the family’s fear of COVID-19 and that he had to go into work every day, he waited three months to see the baby. It ate him up.

“He finally couldn’t take it anymore, and he went and saw the baby through the door,” she said. “His time with him was short. But it was a beautiful time.”