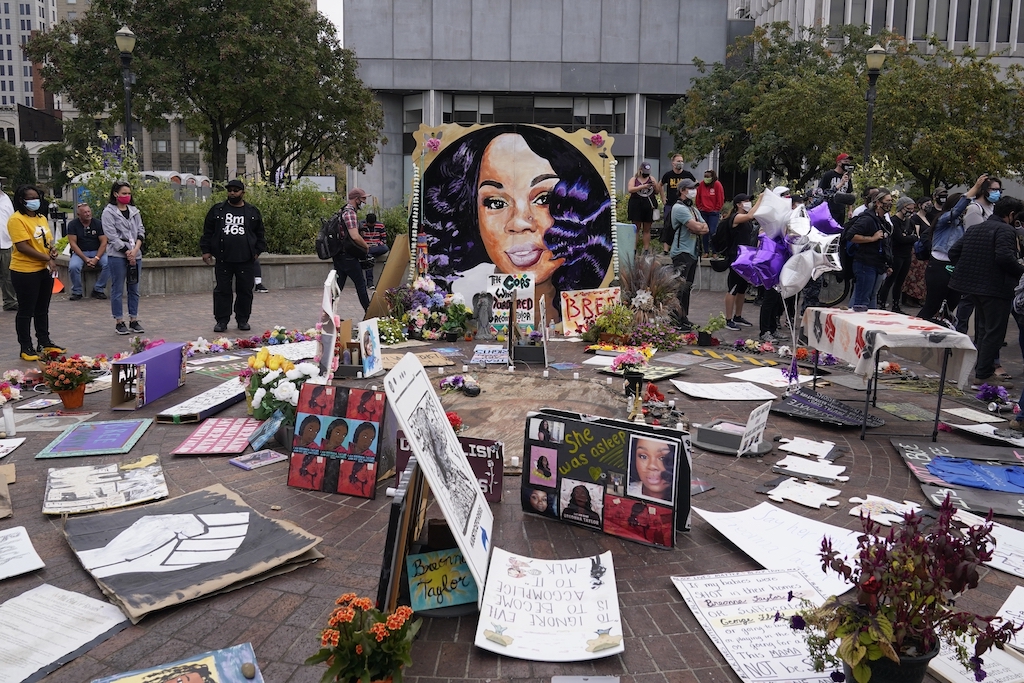 In this Wednesday, Sept. 23, 2020, file photo, people gather in Jefferson Square in Louisville, awaiting word on charges against police officers in the death of Breonna Taylor. (AP Photo/Darron Cummings, File)

LOUISVILLE, Ky. (AP) — Police said they knocked and identified themselves for a minute or more before bursting into Breonna Taylor’s apartment, but her boyfriend said he did not hear officers announce themselves, according to Kentucky grand jury recordings released Friday. In the hail of gunfire that ensued, the 26-year-old Black woman was killed.

The dramatic and conflicting accounts of the March 13 raid are key to a case that has set off nationwide protests against police brutality and systemic racism. When police came through the door using a battering ram, Taylor’s boyfriend, Kenneth Walker, opened fire. If he’d heard police announce themselves, “it changes the whole situation because there’s nothing for us to be scared of.”

The details were contained in hours of recordings made public Friday in a rare release for proceedings that are typically kept secret.

A court ruled that the material should be released after the grand jury did not charge the officers with Taylor’s killing, angering many in Louisville and beyond. The material does not include juror deliberations or prosecutor recommendations and statements, none of which were recorded, according to the state attorney general’s office.

“We knocked on the door, said ‘police,’ waited I don’t know 10 or 15 seconds. Knocked again, said police, waited even longer,” Hoover said in an interview recorded the same day Taylor was shot, and later played for the grand jury.

“So it was the third time that we were approaching, it had been like 45 seconds if not a minute,” Hoover said. “And then I said, `Let’s go, let’s breach it.’”

Another officer said they waited as much as two minutes. Whether or not officers announced themselves has been a key issue in the case because Taylor’s boyfriend, Kenneth Walker, said he only fired at police because he feared they were intruders.

Police said they used a battering ram to enter the apartment, hitting the door three times before getting inside. Detective Michael Nobles said officers made so much noise that an upstairs neighbor came outside and had to be told to go back inside.

According to the grand jury recordings, detective Jonathan Mattingly got shot as soon as he leaned inside the apartment.

Mattingly said in testimony, some of which was previously released, that he fired four gunshots as he fell on his backside. Officer Brett Hankison said in a recorded police interview that moments after the door was broken down he saw darkness and then “immediate illumination from fire.”

“What I saw at the time was a figure in a shooting stance and it looked as if he was holding, he or she was holding, an AR-15 or a long gun, a rifle,” said Hankison, who was later indicted by the grand jury on charges of wanton endangerment for firing shots that went into another home with people inside.

Walker was, in fact, using a handgun.

“We didn’t know who it was,” Walker said in his own police interview shortly after the shooting. “If we knew who it was, that would have never happened.”

Hoover said he believed Walker and Taylor were lying in wait for the officers.

About five minutes after the gunfire erupted and Taylor was shot, her boyfriend dialed 911.

According to audio of the call played for the grand jury, Walker told a dispatcher: “Somebody kicked in the door and shot my girlfriend.”

Walker seemed confused when police interviewed him later. He said he didn’t know why police would knock on Taylor’s door.

Officers had a “no-knock” warrant to search Taylor’s apartment for drugs. But Kentucky Attorney General Daniel Cameron has also said officers announced themselves.

“Were drugs money or paraphernalia recovered from apartment 4? ... The answer to that is no,” said Herman Hall, an investigator for the state attorney general’s office. “They didn’t go forward with executing the initial search warrant that they had for Breonna Taylor’s apartment.”

Cameron, whose office led the investigation into police actions in the Taylor shooting, did not object to the file’s release.

Cameron, a Republican and the state’s first African American attorney general, has acknowledged that he did not recommend homicide charges for the officers involved.

Cameron said two officers who fired their guns, hitting Taylor, were justified because Taylor’s boyfriend had shot at them first. The boyfriend has said he thought someone was breaking in.

The grand jury did charge Hankison with three counts of wanton endangerment for shooting into a neighboring apartment. No one was hit. He has pleaded not guilty. Cameron said there was no conclusive evidence that any of Hankison’s shots hit Taylor.

Protesters have taken to the streets to demand more accountability in the case. Activists, Taylor’s family and one of the jurors called for the grand jury file to be released.

More Than 2 Dozen Charged in Connection to Alleged West Side Drug Hotline, Operation