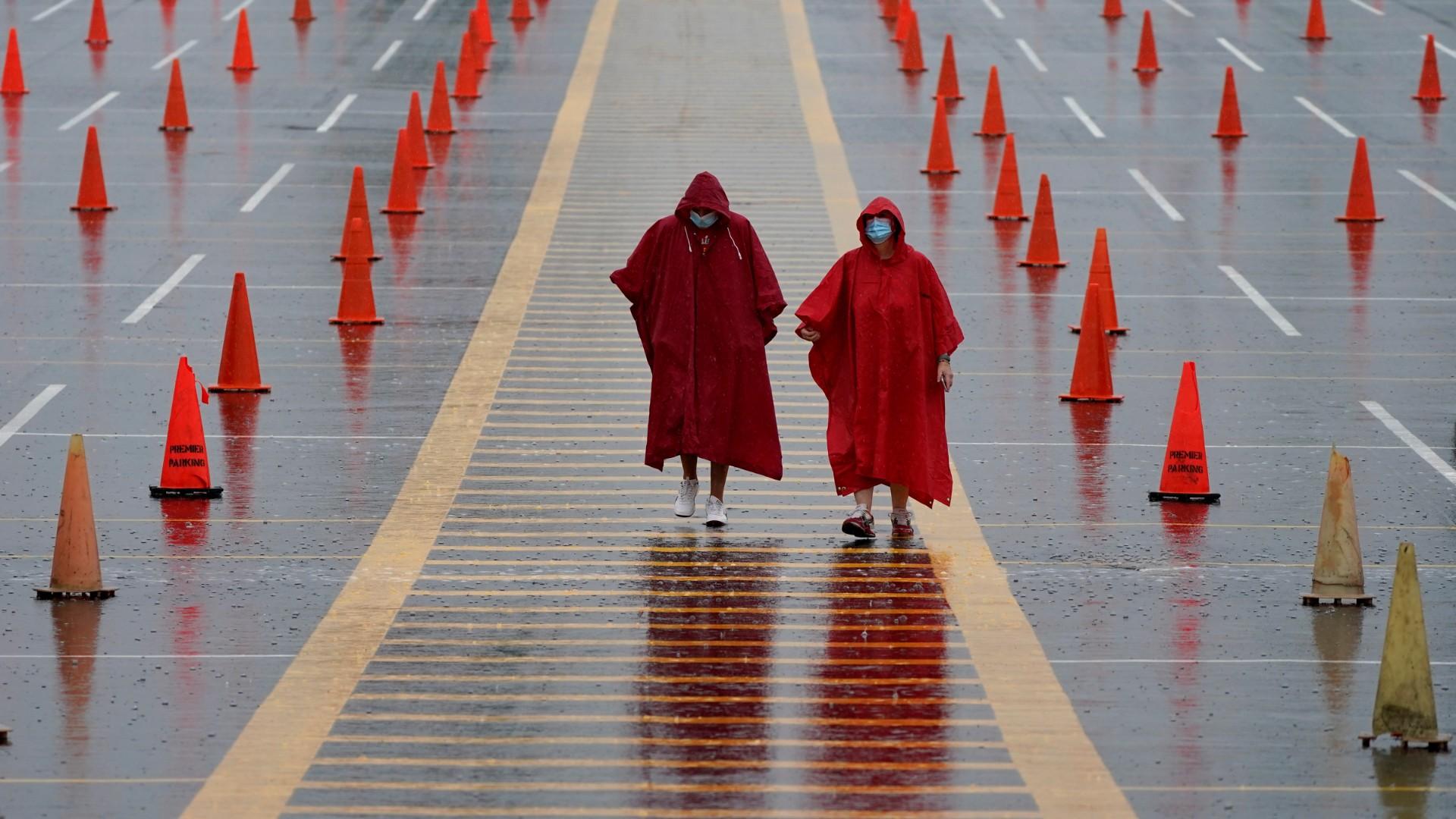 In this Aug. 29, 2020, file photo, fans walk through a parking lot at Arrowhead Stadium marked with traffic cones to keep fans from parking too close together during NFL football training camp for the Kansas City Chiefs in Kansas City, Mo. (AP Photo / Charlie Riedel, File)

KANSAS CITY, Mo. (AP) — Are you ready for some football?

The kickoff of the NFL season Thursday with 17,000 fans in the stadium illustrates the nation’s determination to resume its most popular sport in the middle of a pandemic that has already killed nearly 200,000 Americans.

The topic has led to passionate debates at the state and local level, including whether to allow high school seasons to proceed and how many fans to allow in professional and college stadiums.

While Major League Baseball and the NBA have played without fans, the Super Bowl champion Kansas City Chiefs were allowed to open the season Thursday night against the Houston Texans at 22% capacity. The remainder of the NFL teams start their seasons Sunday with restrictions that vary by stadium, with some games devoid of fans and others with scaled-back crowd sizes like Kansas City.

Across the country, many high schools have started football, but states like California and Illinois cancelled the entire season. There have been scattered outbreaks among players, including an entire football team and marching band in a small town in Alabama that had to go into quarantine because of exposure to the virus.

Pennsylvania lawmakers have been sparring this week with the Democratic governor over coronavirus legislation that would give individual districts and private schools sole authority to decide how to conduct football and other sports.

For football-obsessed fans, the start of the season is a relief after being cooped up for months — an opportunity to gather with friends at bars, go to games and tailgate parties or head to sportsbooks to place bets. Sportsbooks are expecting a record-breaking season in terms of the amount of money wagered, driven by a public that’s eager for action after months of lockdowns.

And with each of these gatherings comes a greater health risk.

For fans, watching football on TV can be done safely and is a welcome way “to go back to normal things in our lives that we love and enjoy,” said Ali Mokdad, professor of health metrics sciences at the University of Washington in Seattle.

For players, coaches and fans who venture into stadiums, a safe season hinges on what else people are willing to give up to lower the case numbers and control the level of community spread that could breed problems.

“If we want to enjoy our football, we have to sacrifice, or let go of certain things we used to do before — such as bars and crowded restaurants and places like this where we know infection is more likely to happen,” Mokdad said.

Kansas City Chiefs president Mark Donovan said that he hopes the opener will send a message to the country that teams can safely return to the playing field during a pandemic. He and other Chiefs executives had a phone conversation with NFL Commissioner Roger Goodell in which he expressed confidence in the team’s plan.

“The commissioner said it best. He said, ‘You’ve got the best fans in the NFL and I know you’ll take pride in doing this right,’” Donovan said.

Dr. Amesh Adalja, an infectious diseases expert at the Johns Hopkins Center for Health Security in Baltimore, said the NFL has the resources to protect players by testing them frequently. He’s more concerned about fans cheering in the stands. Yelling spreads virus particles in the air. Even with a lot of empty seats in a stadium because of capacity limits, fans may need to stand in line for bathrooms or concessions where it’s difficult to stay 6 feet apart.

A few fans could carry home the virus and spread it to the broader community. Trying to stop an outbreak with contact tracing could swamp a public health department.

Athletic Director Jeremy Lewis got a firsthand look at the health risks associated with football gatherings last month when fans at American Fork High School in Utah were disregarding mask and social distancing requirements during a game. So Lewis grabbed the microphone during a quarter break to tell the crowd that play would not continue until fans complied with mask and social-distancing requirements.

“If you want to attend the game then agree to the policies that are in place,” Lewis said Thursday. “My guess is if the people can’t follow those policies then they’re going to end up not having spectators.”

—The University of Wisconsin-Madison is moving all classes online and quarantining students in two of its largest dorms as it deals with rising cases of COVID-19. According to UW-Madison data, 1,044 students and 26 employees have tested positive for the virus since Aug. 6. The city-county public health department said there are at least 46 separate outbreaks currently tied to UW-Madison.

—France, Greece and Israel are seeing surges in coronavirus infections. French health authorities reported 9,843 infections from the coronavirus in 24 hours, the highest daily tally since the end of France’s lockdown in April.

In Greece, health officials announced the highest daily total of COVID-19 infections since the start of the pandemic, with additional restrictive measures imposed in parts of northern Greece to combat outbreak clusters. There’s also a new record number of cases in Israel with just over 4,000 Thursday. The news comes as authorities consider imposing another full lockdown ahead of the Jewish High Holidays.

— U.S. health officials have started two new studies to test blood thinners to try to prevent strokes, heart attacks, blood clots and other complications in COVID-19 patients. Doctors increasingly are finding blood clots in people who died from COVID-19, along with signs of the damage they do to kidneys, lungs, blood vessels, the heart and other organs.

Hospitals have been giving seriously ill patients anti-clotting drugs to try to prevent this, but “quite frankly, we didn’t know how best to treat it” in terms of which drugs or doses to use and at what stage of illness, said Dr. Gary Gibbons, director of the National Heart, Lung and Blood Institute.