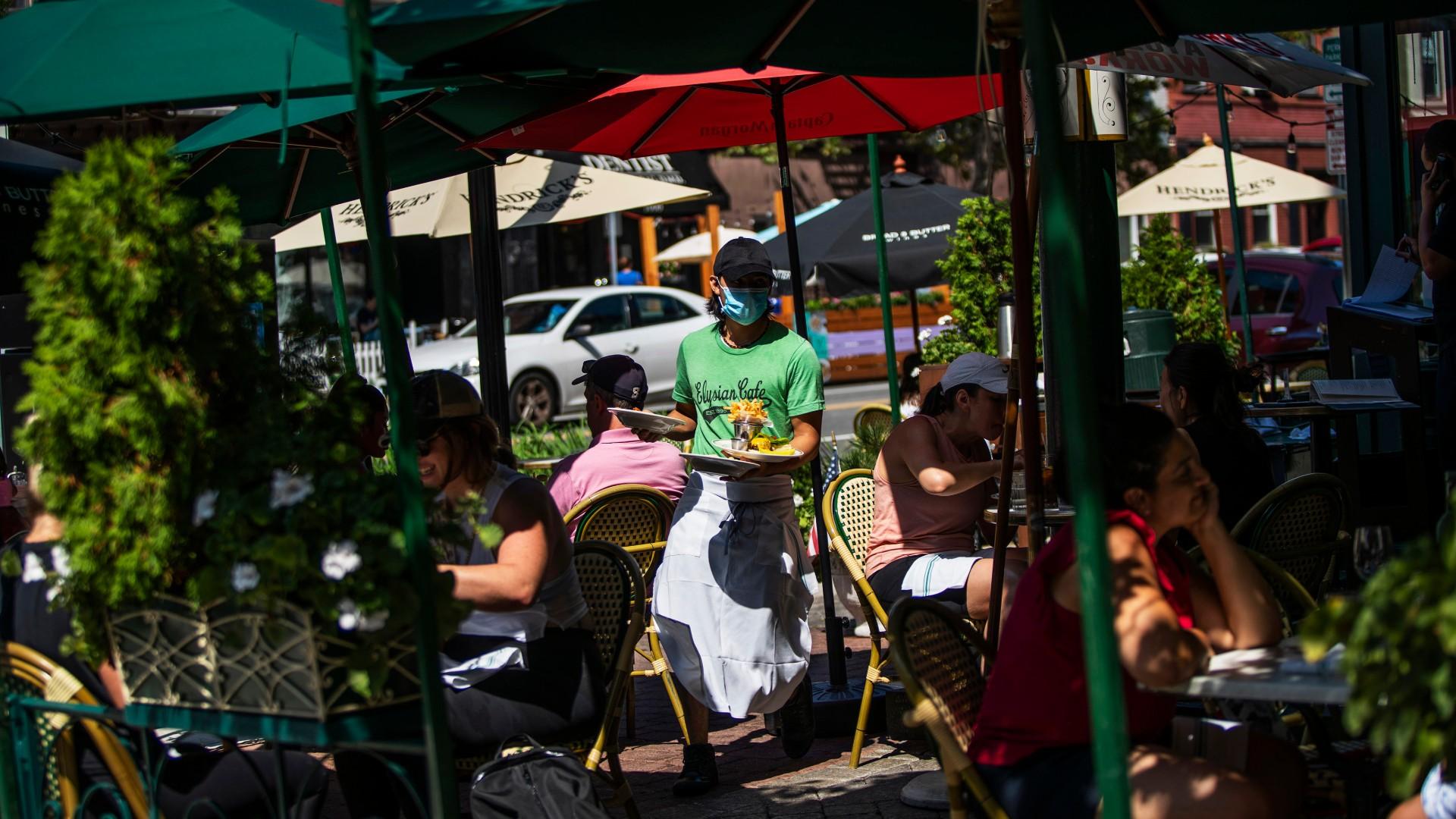 A waiter in a face mask delivers food to the tables outside of a local restaurant during lunch on Friday, Sept. 4, 2020, in Hoboken, N.J. (AP Photo / Eduardo Munoz Alvarez)

HARTFORD, Conn. (AP) — Stir-crazy in some cases after the dreary Summer of COVID-19, Americans headed into the Labor Day weekend amid warnings from public health officials not to make the same mistakes they did over Memorial Day and July Fourth.

The fear is that backyard parties, crowded bars and other gatherings will cause the coronavirus to come surging back

“I look upon the Labor Day weekend really as a critical point,” said Dr. Anthony Fauci, the government’s top infectious-disease expert. “Are we going to go in the right direction and continue the momentum downward, or are we going to have to step back a bit as we start another surge?”

The warnings came as a widely cited model by the Institute for Health Metrics and Evaluation at the University of Washington projected a worsening outbreak in the U.S. that will peak in early December at about 2,900 deaths per day, up from about 860 a day now, unless government officials take action.

Over the summer, the U.S. saw a rise in infections, deaths and hospitalizations, primarily in the South and West, that was blamed in part on Americans behaving heedlessly over Memorial Day and July Fourth.

The landscape has improved in recent weeks, with the numbers headed in the right direction in hard-hit states like Florida, Arizona and Texas, but there are certain risk factors that could combine with Labor Day: Children are going back to school, university campuses are seeing soaring case counts, college football is starting, more businesses are open, and flu season is around the corner.

And a few states are heading into the holiday with less room in hospitals than they had over Memorial Day and the Fourth of July. Alabama, for example, had about 800 people hospitalized with the virus on July 1. This week, it has just under 1,000.

More beaches will be open on Labor Day than on Memorial Day, but Fauci said that is not cause in itself for concern, as long as people keep their distance.

“I would rather see someone on a beach, being physically separated enough, than someone crowded in an indoor bar,” he said.

Americans, cooped up for months, appeared more than ready to venture out and socialize — though with some precautions.

In New York City, once the epicenter of the outbreak in the U.S., Jennifer Bolstad of Brooklyn picked up the keys to a rented minivan with plans to drive with her two children to Maryland this weekend to visit family she hasn’t seen in a year.

“I monitored the quarantine list pathologically, and they are finally a place I can visit,” she said, referring to the list of states that New York has advised are safe to travel to. “I think a lot of people are going stir-crazy and are going somewhere this weekend and possibly not be as cautious as they should about not bringing their germs back with them.”

Fellow New Yorker 30-year-old Heather Poole and her fiance, Jason Goldrosen, decided to pack up some bedding along with the makings for s’mores and head to a tiny home on the property of a brewery for the long weekend about two hours north of the city. She figures it will be one last blast of freedom before she is cooped up again this fall.

“It’s kind of a way to enjoy the outdoors and be able to walk outside and not run into a lot of people or feel the need to wear a mask the second you walk out your door,” she said.

In Cicero, Indiana, 40-year-old Matt McInnis planned to continue with tradition by getting together with about 15 neighborhood friends for a barbecue. And forget wearing masks.

“With the picnic being outdoors, we feel that we can space enough, and with the fresh air that we are going to be safe with it being outdoors and in the wide open,” McInnis said. He said they won’t be asking the eight children at the picnic to socially distance either.

Dawn Love of Bolton, Connecticut, decided to host an outdoor breakfast Saturday for her running group, The Crazy Legs, at her cottage on a lake. The 20 members normally run the local roads together every weekend but haven’t seen each other since March.

Love, 62, said she expects just a few people to show up, with some deciding it was still too risky and begging off.

“Everyone is bringing their own breakfast, their own beverage and a mask,” she said. “We’re going to meet and have the chairs 6 feet apart. Wearing the mask will depend on the comfort level with the person you’re talking to. I have a bathroom inside the cottage, with paper towels and a basket, so there is no shared towels.”

The gathering comes as governors throughout the Northeast discouraged people from traveling out of state this weekend. Visitors from 33 states and territories must quarantine for 14 days after arriving in New Jersey, New York or Connecticut.

Worldwide, the number of deaths has topped 870,000, with more than 26.4 million infections.

The IHME model Friday predicted that worsening outbreaks in the Northern Hemisphere will lead to 1.9 million more COVID-19 deaths in the remaining months of 2020 unless governments take action.

Mask mandates and social distancing could save hundreds of thousands of lives, but there is “a tremendous amount of COVID fatigue” among the world’s leaders because of the economic downturn, said IHME’s Dr. Christopher Murray.

Dr. Albert Ko, a Yale University epidemiologist, said he is concerned about students heading back to school across the nation next week after coming back from holiday travel and a weekend of social gatherings.

“Any transmission events that happen here could be amplified unless we’re careful about it,” Ko said. “Whether it’s going to be a perfect storm, l don’t think so. People are aware of the risk, and people have been socially distancing. But this is certainly a concern.”