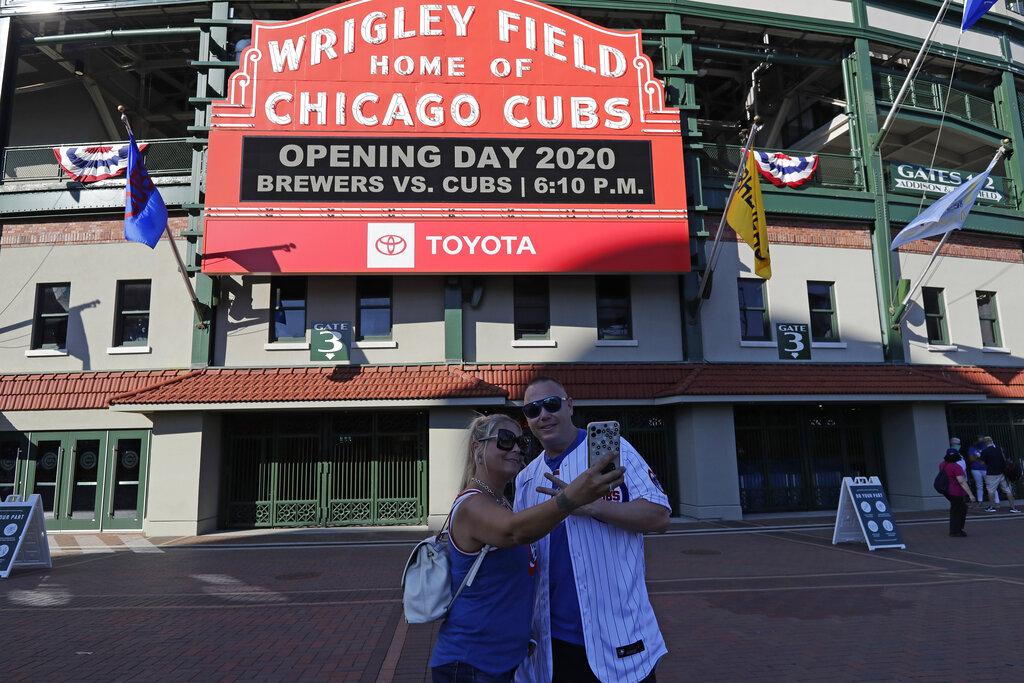 Sandra Bilger, left, and Dustin Moore take a photo in front of the marquee at Wrigley Field before an opening day baseball game between the Chicago Cubs and the Milwaukee Brewers in Chicago, Friday, July 24, 2020, in Chicago. (AP Photo / Nam Y. Huh)

CHICAGO (AP) — Laurie Shaw heard the roar of the crowd and let out a laugh.

The Chicago Cubs were about to open their season at long last against the Milwaukee Brewers on Friday, and it sure sounded like a packed house at Wrigley Field.

Of course, no fans were allowed inside the famed ballpark. The noise was piped in — one of many oddities in a season like no other.

But the recorded cheer of the crowd and the crack of the bat were welcomed sounds for baseball-starved fans even if stadiums are off-limits to the general public. In a delayed season condensed to 60 games because of the COVID-19 pandemic, they’ll have to make do.

“It’s a little unusual to hear fake crowd noise, but we can hear the new organist and that’s great,” Shaw said as she watched on a laptop with daughter Jenna, visiting from Boston.

The two decided they had to be at the ballpark even if they couldn’t go inside. So they made the trip from downtown with a laptop and two chairs and found a spot across Waveland Avenue, beyond the left-field bleachers.

While some fans watched from rooftops up above, the Shaws completed their picture with hot dogs and peanuts in what became a 3-0 win for the Cubs.

“It’s certainly the nicest weather we’ve ever had for an opening day,” Cubs executive vice president of sales and marketing Colin Faulkner said. “But it’s just nice to get here.”

To South Sider William Gonzalez, it could not have happened soon enough.

“It’s about time,” he said. “TV was boring without sports, to be honest. All we had was pro wrestling.”

Gonzalez performed quite a balancing act snapping selfies in front of Wrigley’s marquee a few hours before the game. He was on rollerblades, holding his phone in one hand and a speaker blasting classic rock tunes in the other.

Gonzalez was dressed for the part, too, wearing a red, white and blue pro wrestling-style mask with the mouth covered, a C on one side and a W on the other and Cubs logos on the front and back. But a neighborhood known for a carnival atmosphere — particularly on game days — had a different look. 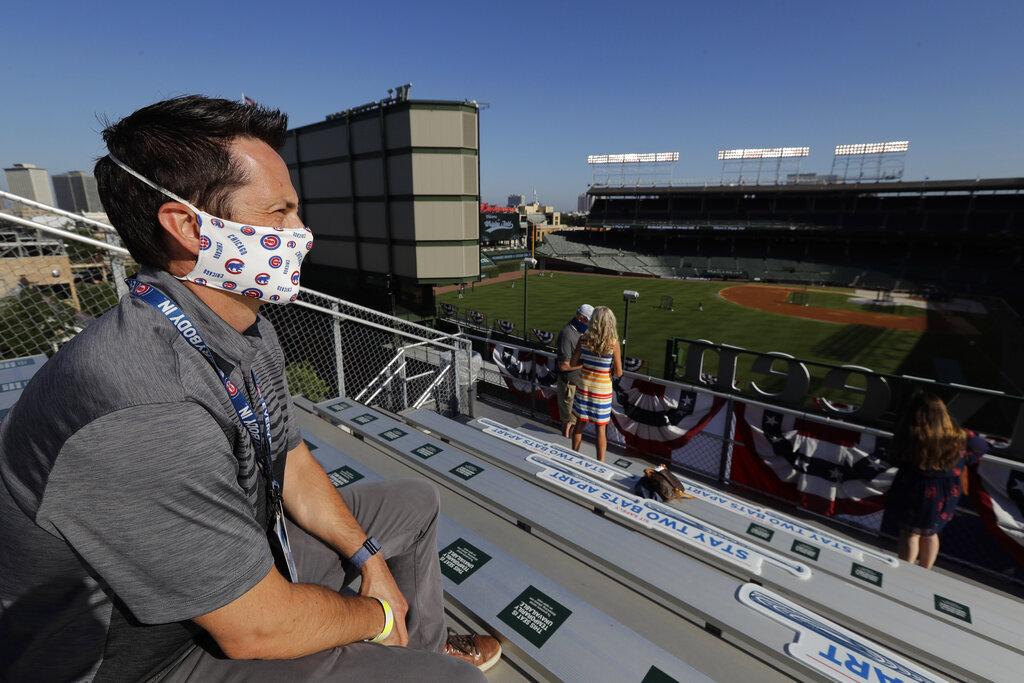 Cubs executive vice president of sales and marketing Colin Faulkner looks to the field from the Wrigley Rooftop before the Opening Day baseball game between the Chicago Cubs and the Milwaukee Brewers in Chicago, Friday, July 24, 2020, in Chicago. (AP Photo / Nam Y. Huh)

Though stadiums in Illinois are allowed to operate at 20-percent capacity with social distancing and face coverings required, Chicago has not given teams the green light to let in fans. Bars and restaurants already operating at limited capacity were dealt tighter restrictions that took hold on Friday because of a recent uptick in coronavirus cases.

The rules prohibit bars that don’t sell food from serving alcohol indoors. Those that do serve food and restaurants will have to limit the number of people at a table to six instead of 10.

In Wrigleyville, it’s hard not to notice the impact. And for Javier Cervantes, it was a jarring sight.

The South Sider parked in a near-empty garage and it just got weirder for him when he saw the uncrowded bars and sidewalks. On the plus side for him, he didn’t have to worry too much about people getting in the way as he took pictures of the ballpark with his new Canon EOS R camera.

“I’m used to waiting in line hours sometimes just to get into a bar,” Cervantes said. “And now, they’re happy if anybody walks in and buys a beer. It’s very surreal. I think the city is taking very good precautions and I appreciate that from the city.”

Cervantes, wearing a Kris Bryant jersey, was one of the few fans to see the game in person on Friday. That’s because a friend set him up with a ticket to watch from one of the rooftops.

Wrigley Field is one of the few ballparks where fans can watch from outside. But with a limited schedule and capacity down to about 50 compared to the usual 200 to 250 on the buildings with rooftop businesses, the view comes with a hefty price. Tickets cost about $300 to $440, compared to around $150 in a normal season.

Gonzalez was hoping to watch the game on the big screen at Gallagher Way adjacent to Wrigley. But the plaza that usually bustles when the Cubs play is off limits. And that means no game on the screen.

“It’s eerie, like out of a movie — ‘The Walking Dead’ or something,” Gonzalez said. “It’s very, very weird. But I’ve been watching a lot of pro wrestling without the crowds so I kind of got used to it. But I have not been used to baseball without the crowds.”